Want to learn how to grow the bird of paradise? We’re going to cover how to grow and care for both the Caesalpinia and Strelitzia’s species of the plant. Both are surprisingly easy to maintain and they share many of the same requirements for planting and care. Before we do that, we’ll get familiar with the genera and species, take a look at their etymology, and then review some noteworthy differences and similarities.

Let’s start this with a little quiz. Don’t worry, it’s pretty easy (and if you don’t know the answer, just peek at the photo credits!). 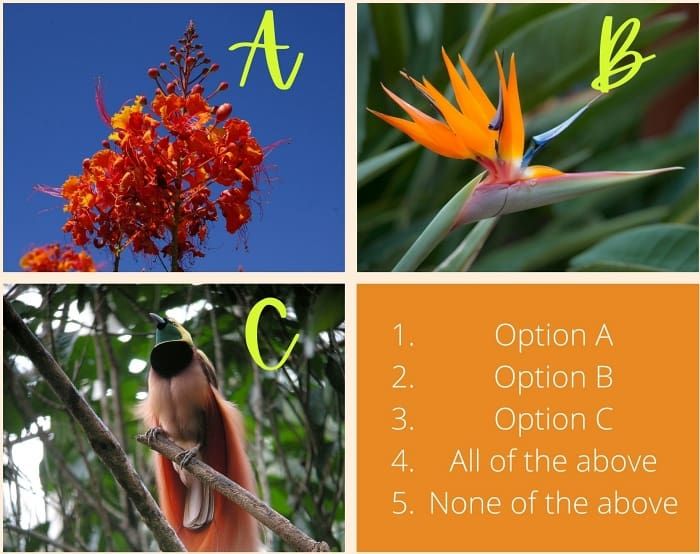 Can you spot the Bird of Paradise?

Picture A: “Mexican Bird of Paradise” by bcsaud is licensed under CC BY-NC-SA 2.0 under CC BY 2.0

Picture B: “Bird of Paradise Flower” by wwarby is licensed under CC BY 2.0

If you guessed B, you are definitely right! That is of course the standard tropical bird of paradise and it’s one of the most popular ornamental plants in the world, probably the most popular for indoor use. It is usually the plant people think of when they hear the name.

If you said option C, you would also be correct. Though I know nothing about these guys, I know they exist, and they also happen to be the inspiration for the common name of these tropical stunners, whose blooms are thought to resemble their angular bodies and wings during flight (and not a crested head as many seem to think). 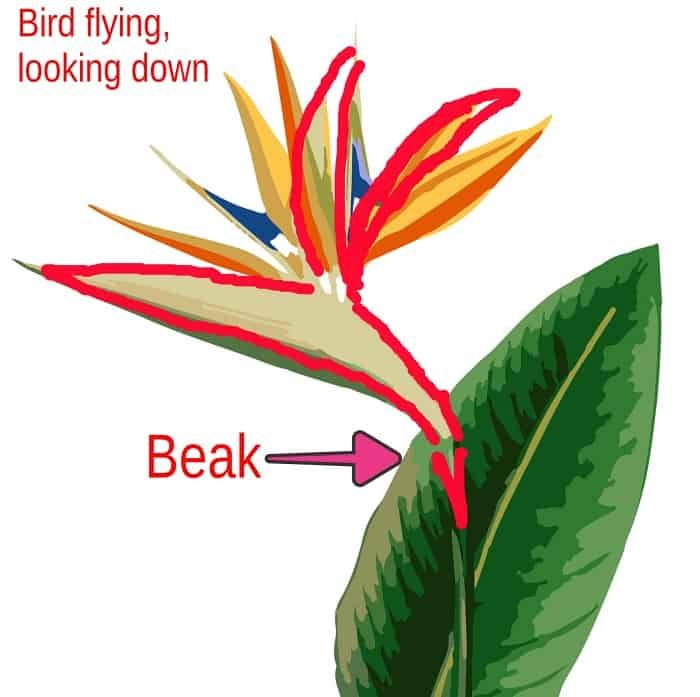 Outline of a flying bird superimposed onto a Strelitzia reginae bloom. To show how the plant earned its common name.

Residents of states along our southern border with Mexico know that option A is also correct. So technically, that makes #4 the correct answer, and everyone gets an A for effort.

That’s right, option A is the Mexican bird of paradise, from the Caesalpinia genus. While hugely popular in the desert southwest, it is not as nationally and even internationally recognized as its namesake: what many consider to be the true bird of paradise, the virtually undisputed queen of the garden, the Strelitzia reginae. 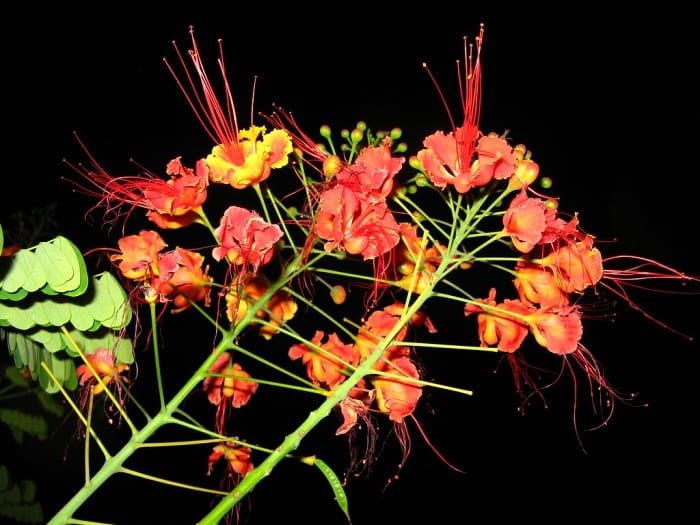 But as you can see, the genetically unrelated plant whose common name she inspired is no slouch in the beauty department. Between them, we’re looking at two of the most interesting, intricate, and striking blooms in botany. 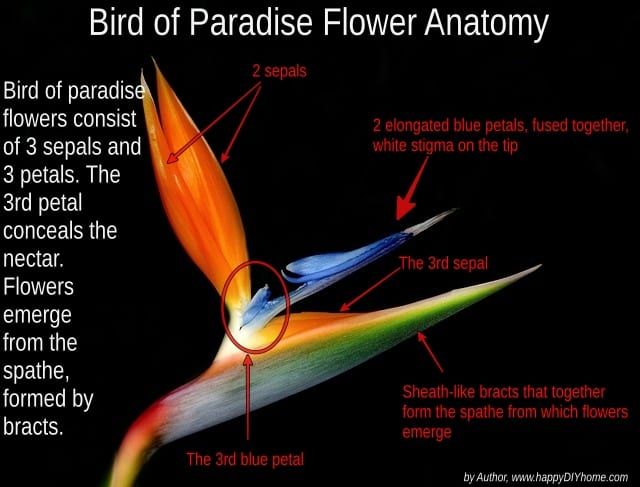 A simple diagram showing the anatomy of a bird of paradise flower. New flowers emerge daily for about a week.

Strelitzia is a genus comprised of 5 species, of which the reginae is the most recognizable, popular, and widely used in indoor and outdoor ornamental applications. She is a cousin to the banana plant, and the two share similar looking leaves. It is also popular in bouquets. S. alba and S. nicolai are also used as ornamentals, though not nearly as frequently. The other 2 species, S. caudata and S. juncea, are rarely seen in ornamental applications and are considered rare.

The Strelitzia is commonly regarded as a tropical plant with tropical origins, though it is originally from South Africa. They are hardy in U.S. zones 9-11, with some carryover into zone 8. All species are subtropical and grow naturally in areas with low rainfall, hence the inability to survive a frost. On the plus side, this also means they are very drought tolerant. 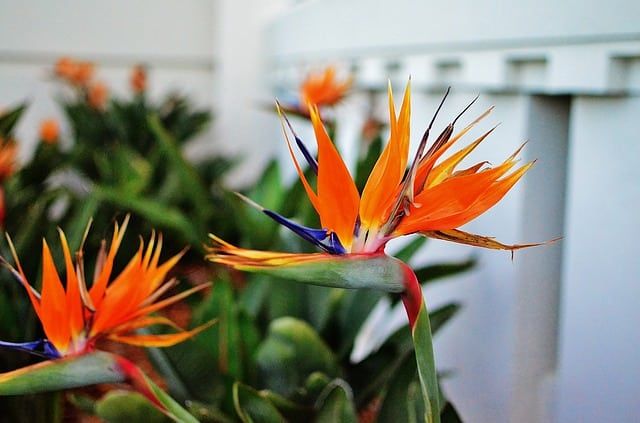 A beautiful tropical bird of paradise specimen thriving in the humid California air.

Today, the plant thrives anywhere it can have warm weather, ideally in the range of 70-90 degrees with some humidity. California is therefore the perfect location for the tropical variety. Indeed, the plant thrives there and was even named, somewhat controversially, the official flower of the city of Los Angeles. I have to assume Florida provides the same climate. We know it does thrive there as well, I’ve just not been there or seen that for myself. 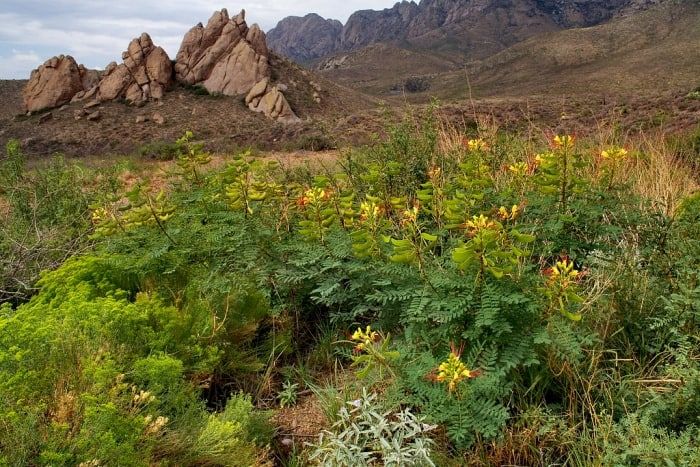 These 3 species are very similar in appearance and have been widely cultivated, spreading across 5 continents.

Way back in 1761, the newly ascended King George III of England chose a wife who happened to be an amateur botanist. 11 years into their marriage, in 1772, King George inherited Royal Botanic Kew Gardens and thus gave his wife a place to enjoy her passion. Around this time, the director of the Gardens, Sir Joseph Banks, was traveling in South Africa. He returned the following year, in 1773, bringing a stunningly eye-catching plant specimen with him, completely unlike anything anyone there had ever seen. In honor of his queen and her love of botany, he assigned the specimen the botanical name of Strelitzia reginae (reginae meaning “of the queen”). From here, it was introduced to the rest of the world. Kew Gardens continues to grow this plant today. 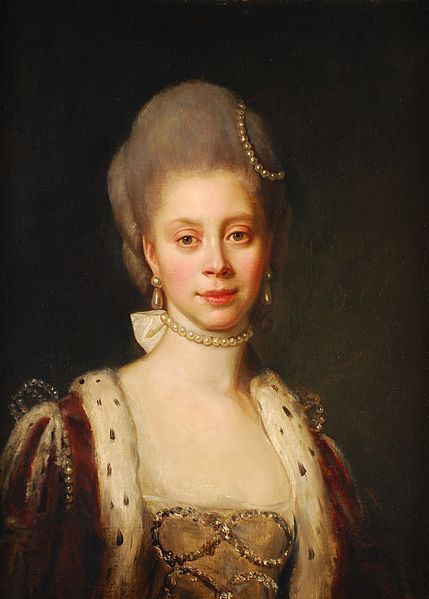 Queen Charlotte of Mecklenburg-Strelitz, wife of England’s King George III and the namesake for Strelitzia reginae, so named by the Royal Gardens director Sir Joseph Banks.

King George’s wife? None other than Sophia Charlotte of Mecklenburg-Strelitz, HRH Queen Charlotte, America’s last queen. Her union with George III before the Revolutionary War earns her that honor. She’s widely regarded as the first multi/bi-racial “royal”, and lends her name to Charlotte, NC., as she was Queen when Charlotte was founded.

How appropriate that our modern-day queen of the garden was named after an actual queen!

The plant takes her common name from the actual animals of the same name. The bloom on the plant is thought to closely resemble the lifted wings and aerodynamic body of the actual birds of paradise during flight.

If the Strelitzia reginae is the queen of the garden, then the Caesalpinia is her long-suffering, overshadowed King. She walks the red carpet, he stands to the side holding her purse. And he’s content to do so, even though he is also extremely popular, widely used in ornamental applications, and boasts a spectacular bloom worthy of a spotlight of its own.

In 1753, 20 years before Streletzia would come to be, the Caesalpinia was so named by none other than Carolus (aka “Carl”) Linnaeus himself, the botanist who created the binomial nomenclature system of Genus species that we use today in plant classification. It was named in honor of Andrea Caesalpinio, an Italian botanist, philosopher, and physician. At the time, the naming was based on four species; three are no longer considered to be Caesalpinia. The one that remains is the C. pulcherrima, the most widely used of them all. 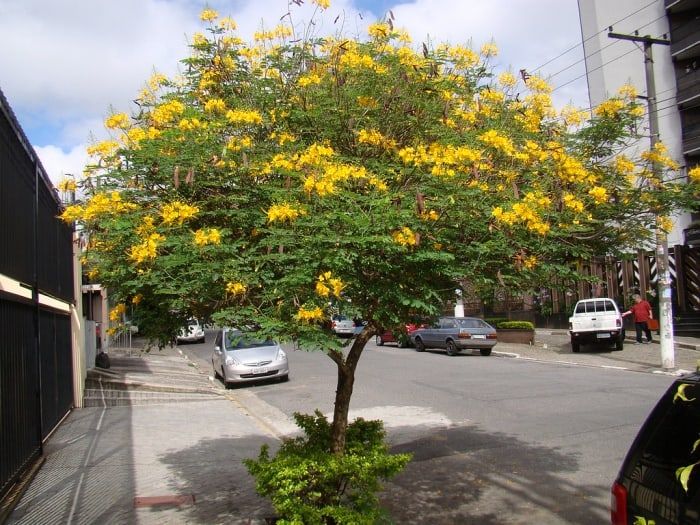 Mexican bird of paradise, trimmed and trained to function as a small tree. “yellow litlle Flamboyant ‘Caesalpinia pulcherrima’ Mexico native” by mauro halpern is licensed under CC BY 2.0

Caesalpinia plants go by a large variety of common names, many of which are region-specific, e.g. “Texas bird of paradise.” “Bird of paradise” is just one of many common names. It is thought to have been given its common name after the tropical version because of shared characteristics between the blooms.

Noteworthy Similarities and Differences Between Birds of Paradise

Both plants are so popular and prolifically used in zones 9-11 that many DIY gardeners have or will use one or the other, oftentimes both. There are quite a few similarities between the two when it comes to growing requirements and expectations. It helps to know this so you can streamline your process a bit. The driveway of a gardener who has planted several tropical birds of paradise in pots. “Containers a Go-Go” by Terrie Schweitzer is licensed under CC BY-NC-SA 2.0

Below is a nice video demonstration on how to do a hard cutback on a Caesalpinia after a frost. You will need to double click on the image, and then double click again when it opens the new window.

If you want to see a visual on pruning tropical birds, the video below is less than two minutes and shows a good method for removing spent blooms. 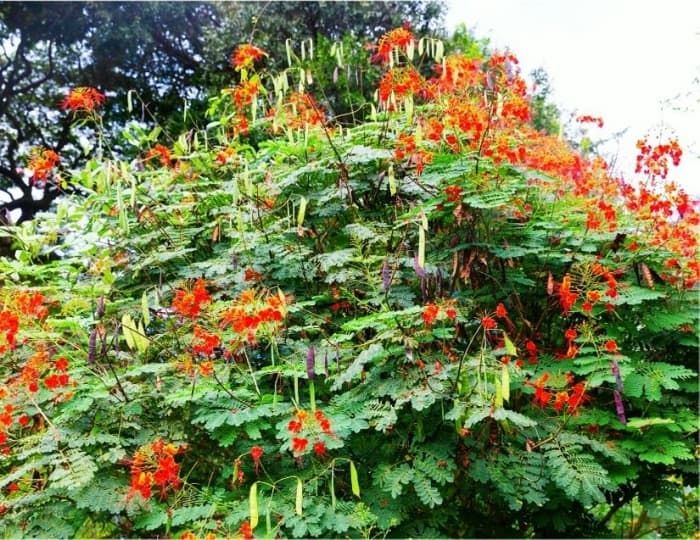 A full grown red bird of paradise (from the Caesalpinia genus) standing at its full height and full spread.

The standard Strelitzia reginae comes in one size and will max out anywhere from 3 to 5 feet +.

I love researching or brushing up on plants before I work with them for the first time (or the first time in a long time). I feel that knowledge makes you look at and treat the plant differently. You know where it came from, how it was named, what it likes and does not like, and knowing those things makes it a bit more personal. The plant has a personality now, and it’s great to see them that way! They are alive, and they do have personalities, and they respond well to gardeners who appreciate that about them. I always encourage people to talk to their plants because there is something soothing about it. Sure, the plants like it, but you would be surprised at what this engagement and interaction can do for you, too.

Now that you are armed with this information about birds of paradise let’s put your knowledge to work and get some in the ground!

Tools: rake and shovel for in-ground planting; hand tools for container planting; gloves for protection; hat & sunscreen if planting in the open sunlight

How To Plant and Grow Bird of Paradise Plants

Note: The steps below happily apply to both Caesalpinia and Strelitzia species. If no species-specific notation is added, everything is the same for both plants. When needed, a note will be added to advise when one needs something the other does not. There are also notes included for container planting, which is also largely the same. Easy peasy! 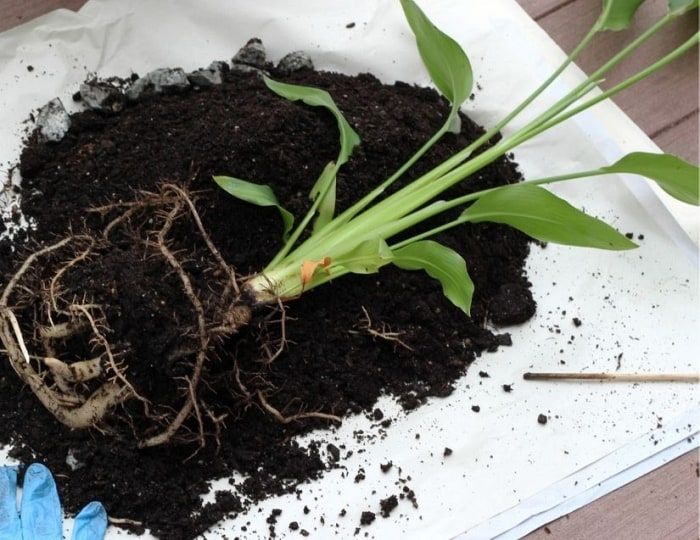 Getting ready to re-pot a young tropical bird of paradise plant. 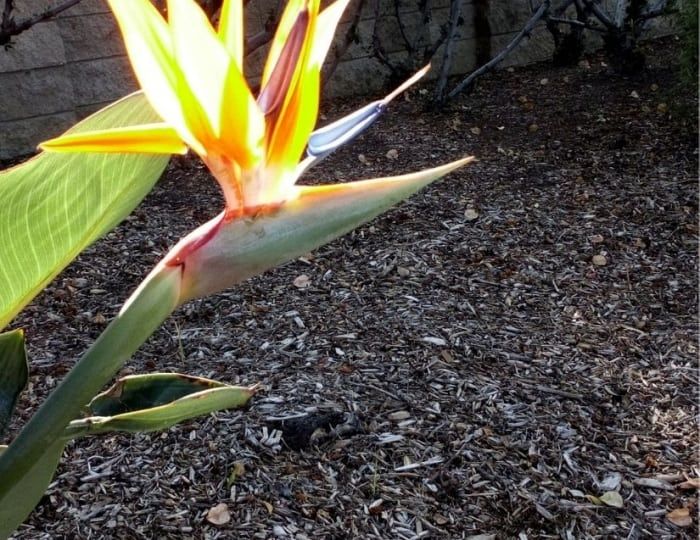 A healthy looking reginae in bloom, at home in a garden that’s been thoroughly mulched.

Caring for Birds of Paradise After Planting

Both genera are low maintenance plants. As long as they are in temperature, light, and soil conditions they like, the after-care is simple. While both are very drought tolerant, the establishment process does require more water, as is the case with all plants. Moisture levels of the soil will be the main thing to watch during its first year, along with browning in the plants. If you start to see this, bump up the watering.

Tropical birds of paradise will respond well to a daily misting if indoors or in arid conditions. Remember, they love their humidity! They also do not like to get dirty, so be sure to dust them and keep them clean. 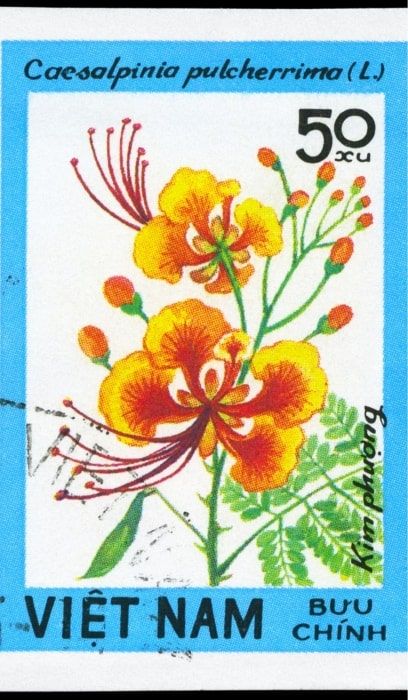 A Stamp printed in Vietnam shows the image of a Caesalpinia pulcherrima, from the series “Wildflowers”, circa 1984

Neither genera have issues with pests or diseases, other than the aforementioned root rot. In addition to being virtually disease and pest-free, both are also deer resistant. If you come across aphids, or anything else, you can treat with an application of neem oil.

As you continue through their first year and after, just continue to maintain the growing conditions they prefer. Containers will need to be moved indoors and outdoors. Caesalpinia will begin to require selective pruning, which can be done by hand with a good pruner. I always recommend the Corona 1” bypass pruner. I tried many different kinds throughout my landscaping career, and nothing else compares to the feel of the Corona.

Whether you chose a Strelitzia or Caesalpinia, or perhaps both, you chose well. They are truly amazing plants. What other plants can offer such toughness and resilience with intricately complex and beautiful flowers? With Caesalpinia, you’ll have showstopping blooms to enjoy in no time (if you don’t already). If you chose the Strelitzia, sit back and relax because you have a bit of a wait. But in a few years, all the love and talking you gave your plant will reward you with stunning flowers. 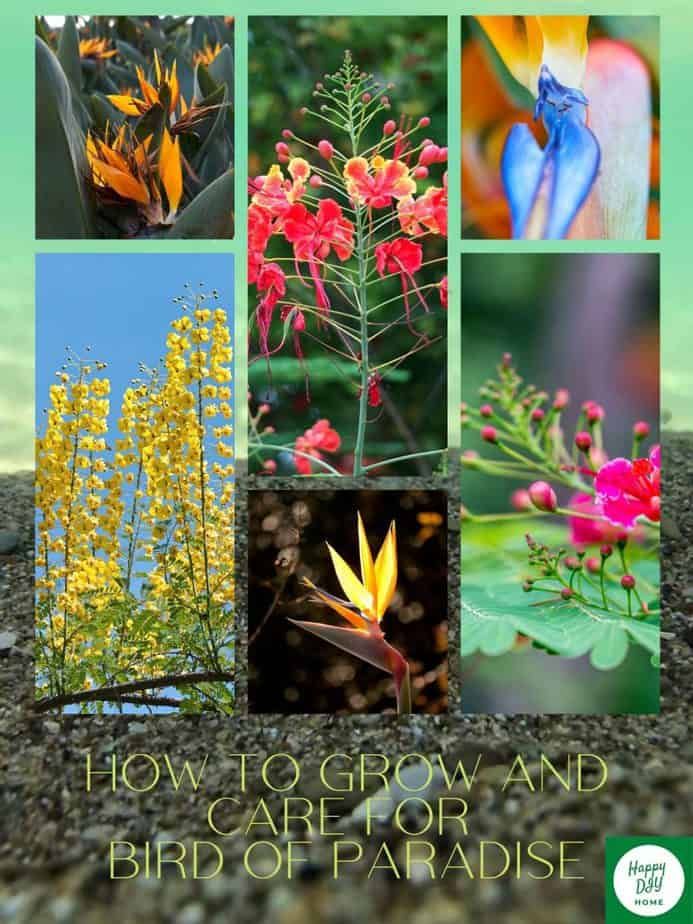 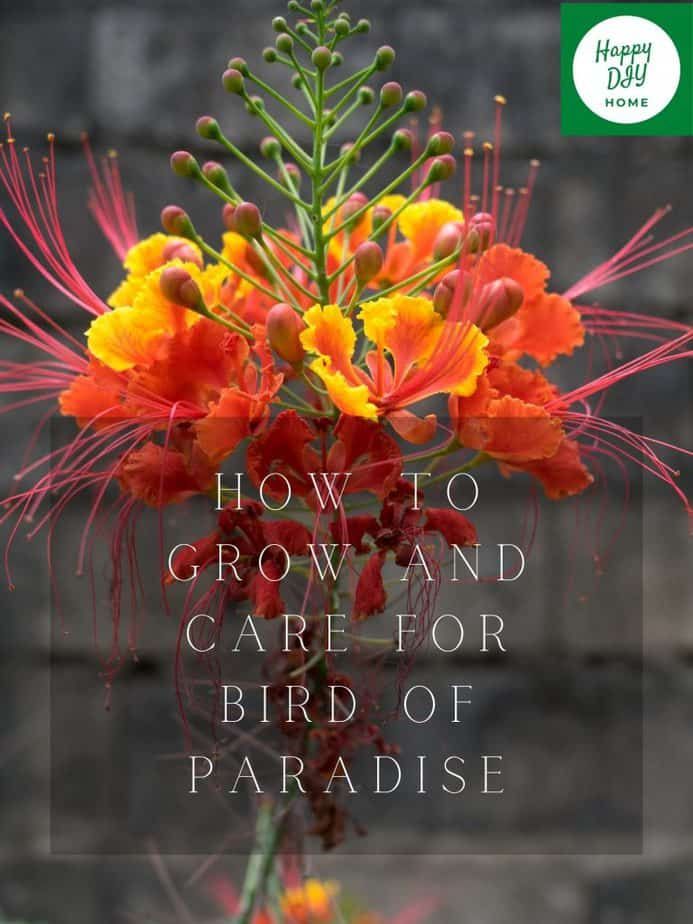