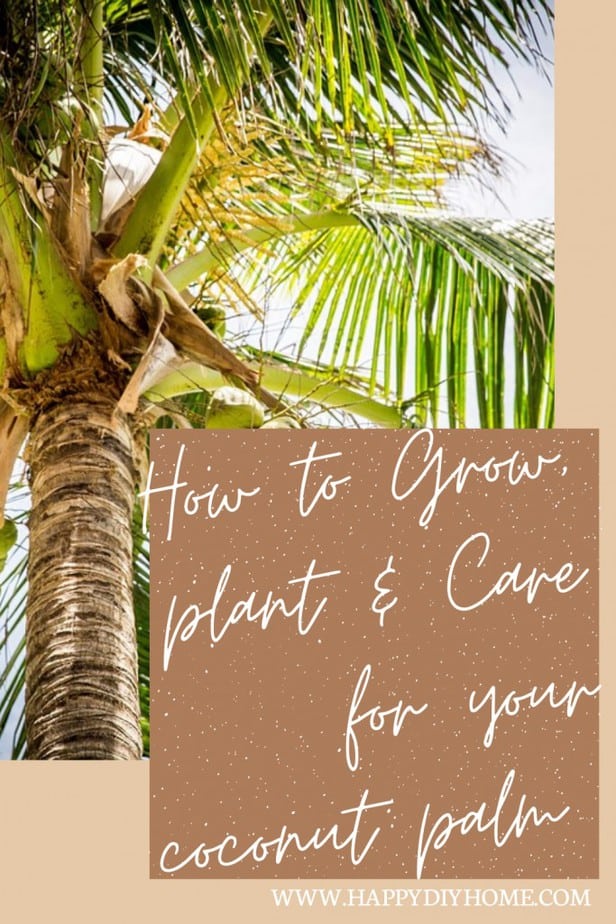 Ah, the humble coconut tree. Having originated somewhere in Indonesia or Malaysia (we think), coconut palms are the VIPs of trees in the tropics. Their long and storied history in this region dates back thousands of years, but only of late has the west caught on to just how precious to our health the coconut truly is.

Growing up to 80 feet in height, coconut palms are definitely not the tallest trees in the forest, but they’re certainly not the smallest either. Their swollen base tapers quickly off to a slender, ringed trunk that’s prone to swaying in the wind — particularly given its huge mane of feather-like leaves and heavy, hardy seeds.

Coconut palms grow like weeds in their homeland of Southeast Asia, as they do in the tropics across the globe. But getting them to grow in cooler climates is significantly more challenging.

In this article, we take a look at how to plant, grow, and care for your coconut tree — even outside of the tropics. 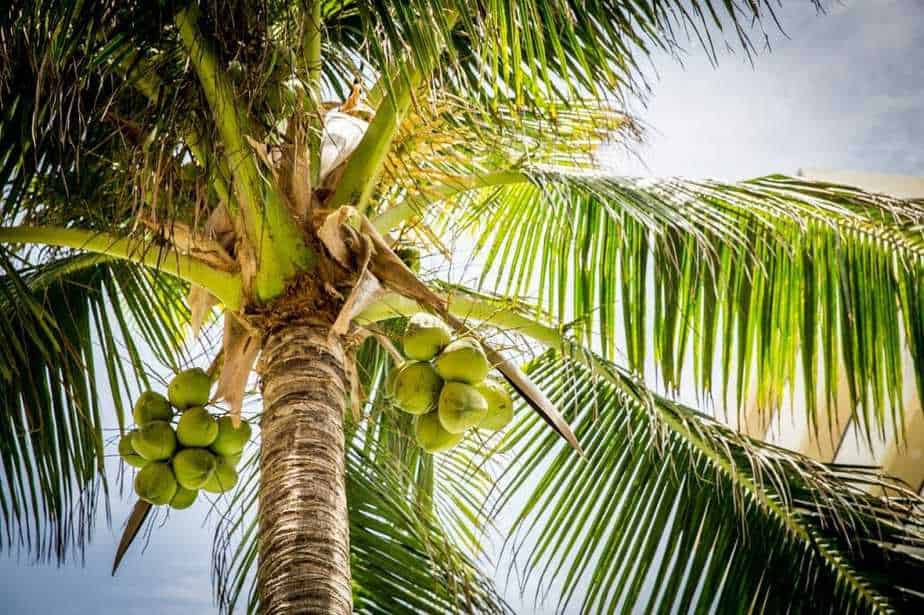 Coconut palms tend to symbolize vacations and holidays, so it’s not surprising that many people want to recreate that feeling in their own garden.

Choosing your coconut palm properly is an important first step before the seeding and planting process.

Believe it or not, there are more than 2,500 palm tree species. Not only do palms produce coconuts, but also dates, betel nuts, and acai fruit.

Only one of these myriad of species, however, produces the coconut plant, which is the coconut palm. And while there are many different varieties of coconut palms, they’re all divided into two main categories: tall and dwarf. 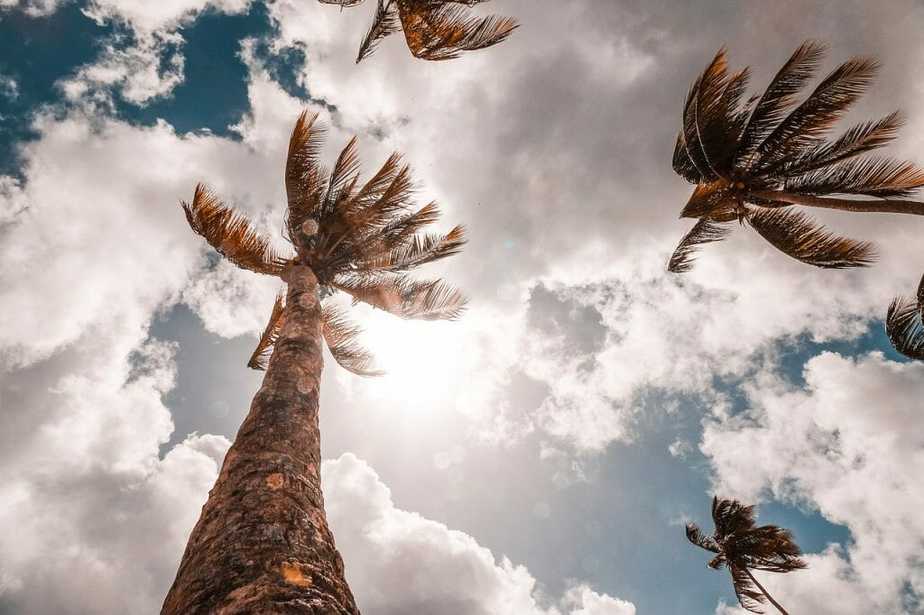 Coconut palms may not be the tallest trees in the forest, but they can grow pretty high nonetheless.

Dwarf coconut palms are the second most common variety of this species. They’re typically smaller than the tall coconut palm (hence the name). Because they most self pollinate, there are fewer varieties of this type of tree. Being more resistant to disease than their tall cousins, the dwarf coconut palm is the preferred variety of the species for planting in home gardens and parks. 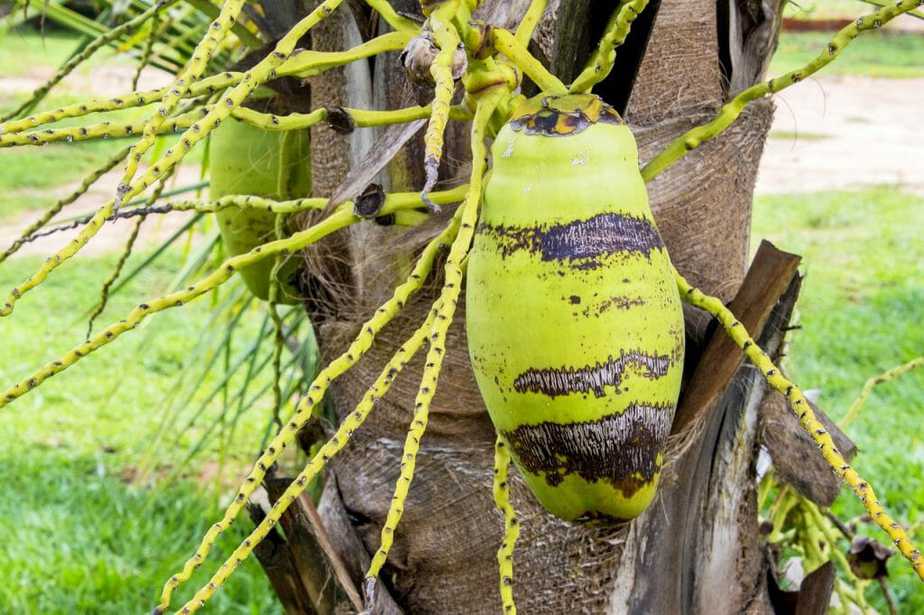 Dwarf palms grow up to 5 meters and usually produce fruit after three to five years. They tend to be considered more beautiful, too, with orange leaves and crown, while their coconut fruit tends to be gold, green, bronze or olive.

These trees are typically distinguished from one another by their color and country of origin. For example, the Malayan Yellow.

Growing your coconut from seed is not actually all that much more difficult than picking up a potted nursery plant from your local home and garden shop — it just requires significantly more time and patience.

The first thing we’ll need to do is soften the coconut shell. You can do this by soaking it in water for a few days.

Get yourself a fresh coconut that still has its husk, and give it a good shake. Does it sound like there’s some water in there, shaking around? Good!

Fill up a bucket with room-temperature water and place your coconut inside. Grab a large rock from your garden or some other form of weight, and weigh your coconut down so it’s submerged under the water.

Leave it for three to four days. 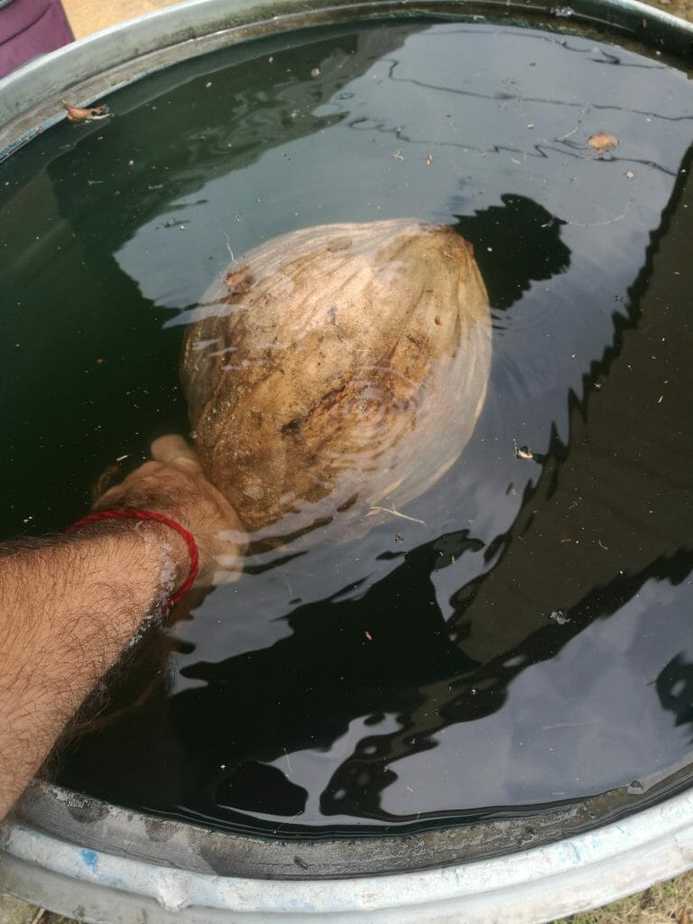 2. Seal your coconut in a plastic bag

After a few days have passed, remove your coconut from the water.

Find a zip-top bag that’s big enough to fit your coconut and seal. Place your softened coconut inside, along with one cup of water.

If you have a water heater, place the bag next to it. If not, simply ensure it’s in a warm, dark location.

Check on your coconut weekly. You can expect the seed to germinate in anywhere from a few weeks to a few months (it shouldn’t take longer than three months to start sprouting).

When you notice the roots starting to grow, remove your coconut from its sealed bag. Dampen some paper towel, and use this to wrap the roots.

Place the coconut back in the sealed bag, and keep an eye on it.

When the roots reach around six to eight inches in length, your coconut is ready to be transplanted into soil 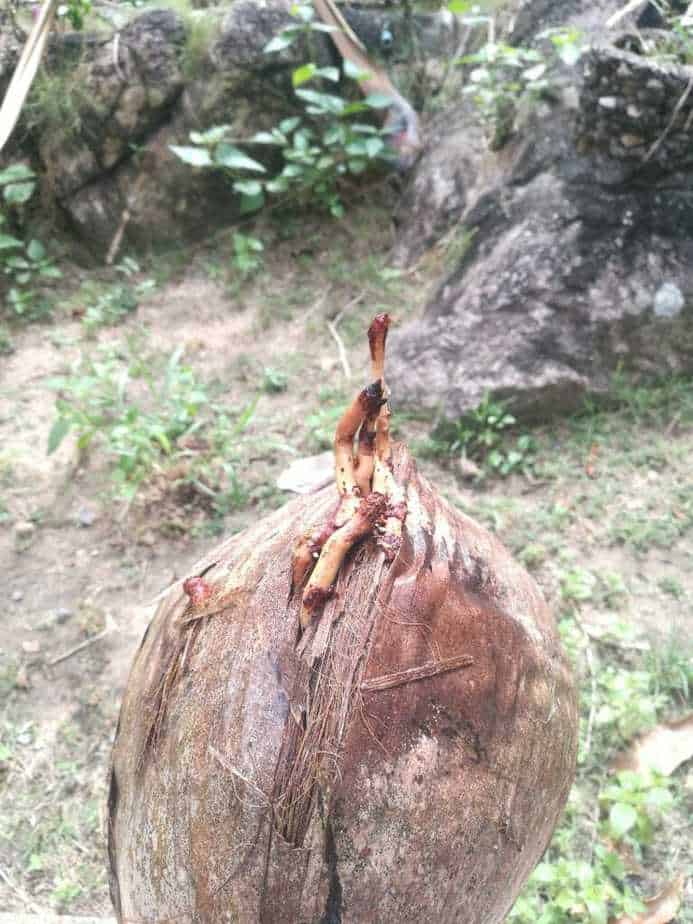 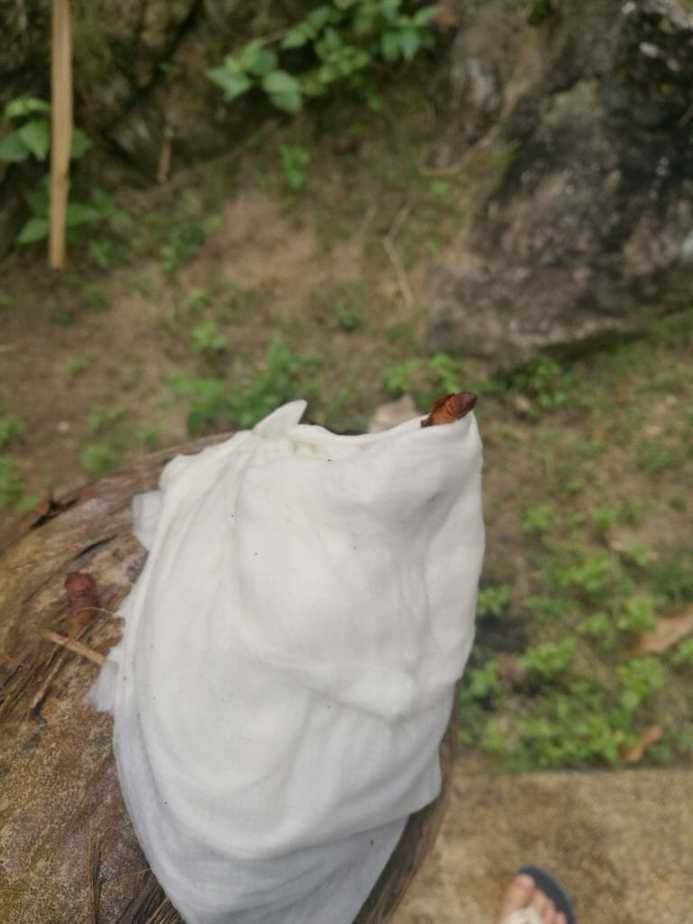 Covering the sprouted roots with a wet paper towel allows them to form a callus, which helps prevent rot when rooting.

When the roots reach the desired length, get your large pot and fill it with potting soil. Ideally, you want potting soil that’s been designed for cacti.

Alternatively, you can make your own cactus soil by mixing one part regular potting soil together with one part sand.

The coconut plant’s root ball is quite small and shallow rooted, so it doesn’t need a huge amount of soil for the first few months.

Make a hole in the soil and plant your coconut seed so that part of the sprout is covered by soil. Place your pot in a location that receives as much sun as possible throughout the day.

If, however, you’re planting your coconut in the ground, it’s all about location. Look for a spot with loose, well-draining, kind of sandy soil, which also receives full sun all day (if possible). If you’re in a low-lying area, it’s best to create a bed for your coconut — this improves drainage.

Don’t fret too much if you can’t find a location with full sun, as these trees do grow in full or part shade as well. They’re also well adapted to high winds and salt spray — you would be too if you came from the beachside!

It’s best to consider the coconut palm a tall feature plant in your garden. When planting, remember that these trees can grow higher than 10 meters. If that’s too tall, consider getting yourself a dwarf variety of the coconut palm, which only grows to five meters.

It may even be a good idea — depending on your location in the world — to build a mini greenhouse for your baby coconut to thrive. To do so, create a make-shift fence around your coconut with bamboo stakes, inserted into the ground about six inches from your sprouting plant. Get a roll of plastic wrap, and wrap it around the sticks, covering the top of your plant to protect it from the elements. When the plant has grown to 12 inches tall, the greenhouse contraption can be removed. 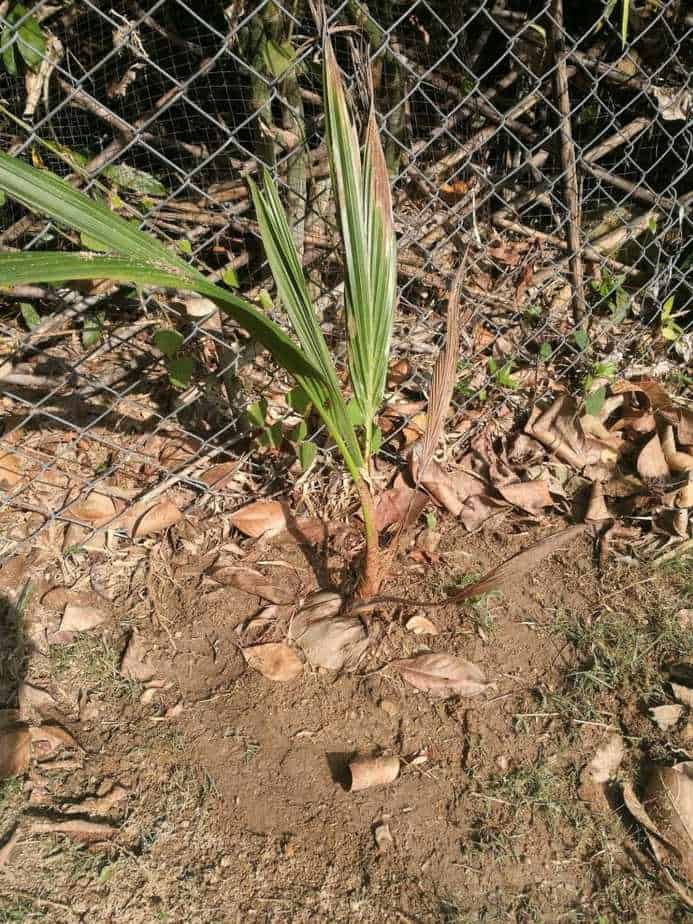 Once planted, your coconut palm needs five or six years to grow before it will bear fruit.

You’ll want to keep checking your potted or planted coconut on a weekly basis. The soil around it should always be moist. Watering your plant every week is usually enough. 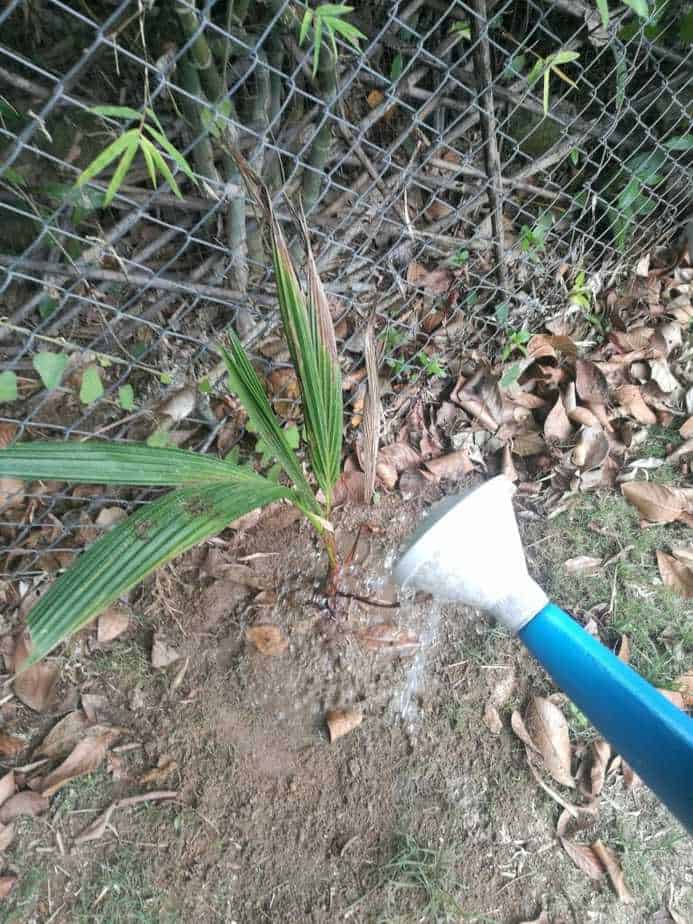 Keeping your coconut palm’s soil moist is essential for growing a strong tree.

Consider harvesting your own rainwater for an eco-conscious way to keep your coconut palm’s soil moist.

How to treat pests and diseases of the coconut palm

Though pretty easy to plant, coconut palms are a bit trickier to maintain. These tropical towers are prone to many different types of diseases.

Lethal Yellow is the coconut palm’s most common disease. Indeed, it’s what’s been plaguing native and commercial coconut trees up the Florida coast. Its symptoms include leaves turning yellow, dropping fruit, and a slow dying process.

To counter this disease — particularly if you live in the danger zone for it — you can try planting a variety of coconut palm that’s resistant to disease, like the Malayan Dwarf. Otherwise, you can try treating it with antibiotics, but just know that you’ll have to do so three times a year for the rest of the tree’s life.

As such, if a coconut palm in your home garden catches a disease, it’s usually easiest to simply remove it.

Another annoyance for the coconut palms is fungal bud rot. This turns leaves gray or spotty, while the buds shrivel up, turn yellow, and drop, producing a nasty smell. You’ll typically notice this pesky problem just after heavy rain, or if your coconut palm’s soil isn’t draining well.

Keep your coconut palm treated with fosetyl-Al to prevent this fungus issue.

Then, of course, there’s the creepy crawlies. In the tropics, where the coconut palms are native, the trees tend to be pretty resistant to insect predators (except for the occasional mealy bug, scale, or aphid, which are easily treatable). Outside of their homelands, however, coconut palm leaves are favored habitats of thrips and spider mites.

Tips for growing your coconut palm in the cold

While coconut palms typically conjure images of whitesand beaches, azure oceans and longtail fishing boats, they can be planted in cooler regions too.

These trees can stand temperatures as low as 55 F. The cold does slow the growth and weaken the plant. You’ll need to watch out for damping off and collar rot, and treat accordingly.

Coconut palms tend to grow slowly at first, when they’re young, and then faster as they mature. So, if you’re in a cooler climate, it’s best to keep your young coconut palm indoors where it’s warmer, supplementing sunlight with artificial light in the winter.

You’ll need to pay special attention to your young coconut palm if you’re in a cooler climate, but it won’t last forever — once mature, your coconut palm should be able to stand temperatures as cold as 20 F. 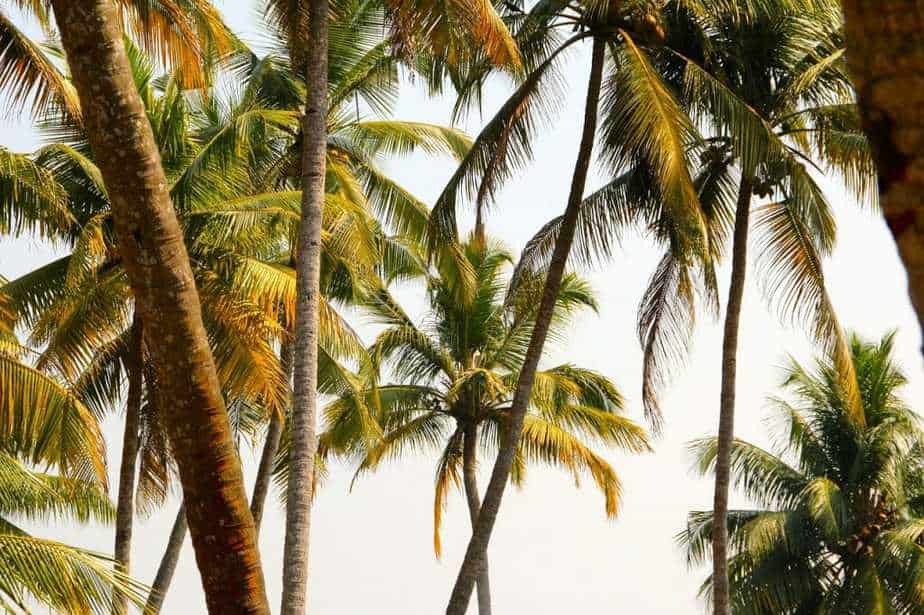 Coconut palms are not only limited to the tropics — these skinny giants can grow in cold climates too!

How to care for and maintain your coconut tree 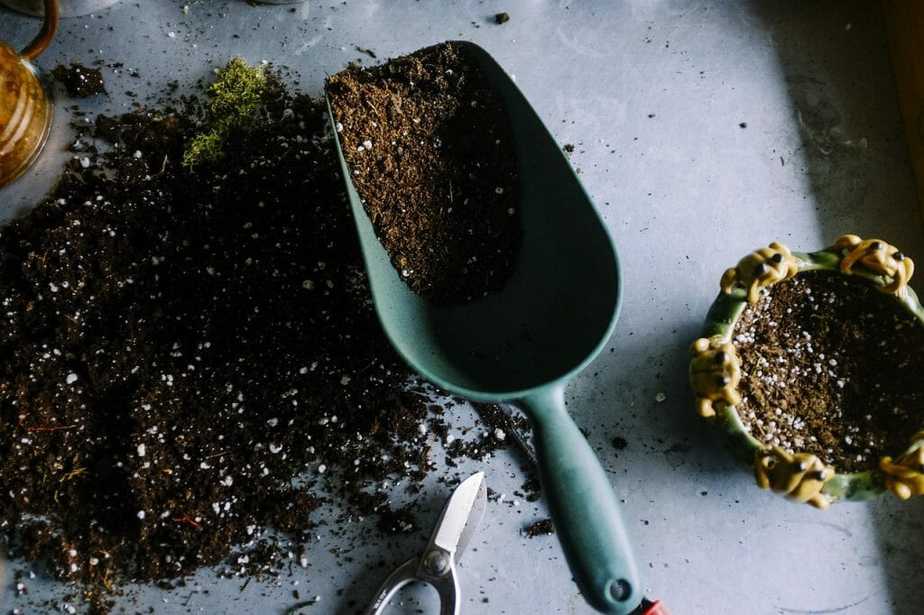 If you can’t find the right soil for your coconut palm, you can simply make your own.

💡Tip: Coconut trees grow fast, as do their fruits — the coconuts themselves. And because these seeds are so huge and hardy, they can cause a lot of damage to whatever they might hit when they fall from their stem. Keep this in mind when you’re choosing a location for your coconut palm, and don’t plant it near your house or anything of value that a falling coconut could damage.