A popular member of the vegetable garden, the potato is one of the easiest crops to grow. A low maintenance, versatile crop potato plants help to suppress weed growth and cultivate your soil. They are just as happy growing in containers and raised beds or planters as they are in the ground.

But when are your potato tubers ready to harvest? And, perhaps more importantly, how do you harvest them? Our guide to harvesting potatoes will tell you everything that you need to know. 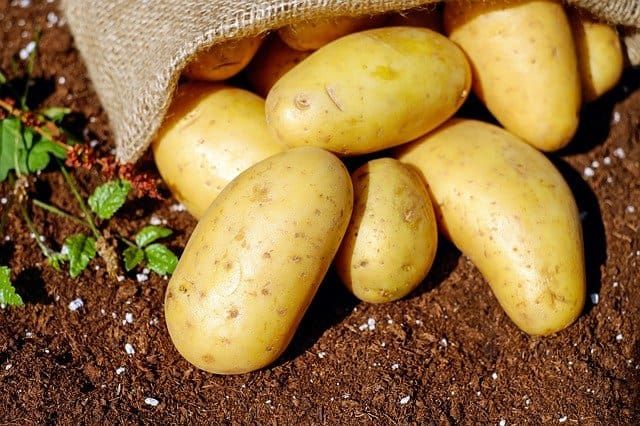 Packed with flavor and easy to grow, potatoes are an essential part of any vegetable garden.

When do I Harvest my Potatoes?

When your crops are ready for harvest depends on a number of factors, including your local growing conditions and the weather. It also depends on which type of potato you have planted. Seed potato plants are divided into 3 categories:

As the name suggests first early potato plants are one of the earliest crops you can plant and, therefore, start harvesting. Gardeners in most areas can plant first earlies from the end of February until the middle of March. The tubers are ready for harvest around 10 to 12 weeks later. If the weather is favorable, you may be able to harvest slightly earlier.

First earlies are one of the easiest types of potato to grow because they rarely suffer from blight. Known for their tender, flavorsome taste, first earlies are typically smaller than maincrop varieties, roughly about the size of an egg, and with soft skin. Popular varieties include:

To check your crop before you begin to harvest, gently move some of the soil around the top of the plant. If you find potatoes that are the size of an egg you can carry on harvesting. If you want slightly larger spuds, leave them in the ground for a little longer. 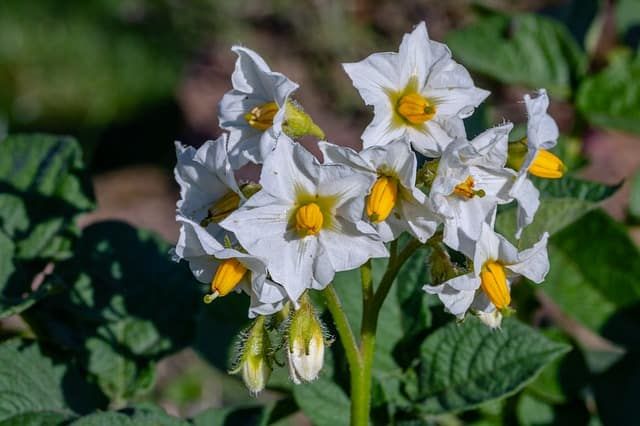 As the flowers fade from the plant, or unopened blossoms fall, you can begin preparing to harvest your potato crops.

Like first earlies, the easiest way to tell if your second earlies are ready for harvest is to watch the flowers. As soon as spent flowers or unopened buds start to fall from the plant, you can start your potato harvest.

Usually planted about a month after your second earlies you can plant maincrop spuds from mid march onwards for an earlier harvest. Maincrops mature in about 20 weeks. Typically larger tubers than the early varieties, they require a little longer growing time. Common common maincrop tubers include:

Typically, you can begin harvesting maincrop potatoes in August. The harvest can last well into September, depending on your planting date. Maincrops are ready for harvest when most of the foliage is yellow and starting to brown or shrivel. Allowing the plant to die away before you begin to harvest enables the tubers to store plenty of starch. This helps to fill them with flavor.

To harvest your maincrops, cut the plant down to about an inch above the ground. Don’t pull up the tubers just yet. Wait a few more weeks, they keep perfectly well in the ground, before harvesting. This helps to cure the potatoes, hardening the skin and making storage easier. If you don’t intend on storing your maincrop overwinter, you can begin harvesting as soon as the plants are ready. 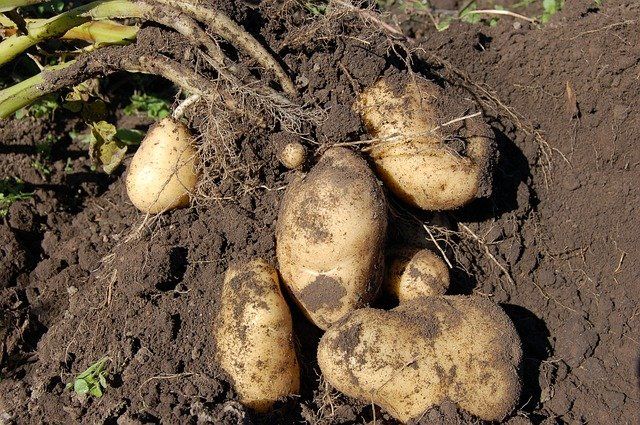 Larger tubers require a slightly longer growing time before they are ready for harvest.

When to Harvest Late Season Tubers

If you have planted a late maincrop for a winter harvest, allow the weather and the plant to tell you when to harvest. As with earlier plantings, allow the top of the plants to die away before you begin to harvest.

The temperature can also affect when to harvest. Potato plants can tolerate light frosts but should be lifted and stored before the first hard frost arrives. The soil should be at least 40 ℉ and workable. After curing the crop can be stored for use throughout the winter and early spring. Growing a large, late season crop that can be stored is a great way to grow your own food all year round.

How to Harvest your Potatoes

Be careful when harvesting. Try to avoid damaging the tubers. This is particularly important if you intend to store your spuds. Damaged tubers rarely store well and, instead, may cause your entire crop to rot.

Harvesting tubers is best done on a dry day. Too much moisture during the harvest can encourage rot and disease. Whether you are growing potatoes in containers or in the ground, harvesting is largely the same.

How to Harvest First and Second Earlies

I find it easier to use my hands to remove early potato crops. Gardening gloves help to keep your hands fairly clean and protected.

Use your hands to reach into the soil and dig up as many spuds as you can find. If you have mounded the soil up around the plant during the growing process, carefully remove the soil and take the potatoes that you want before remounding the soil around the plants. When harvesting take just what you need, early varieties don’t store well. They keep far better in the soil. In fact many continue to grow and develop. 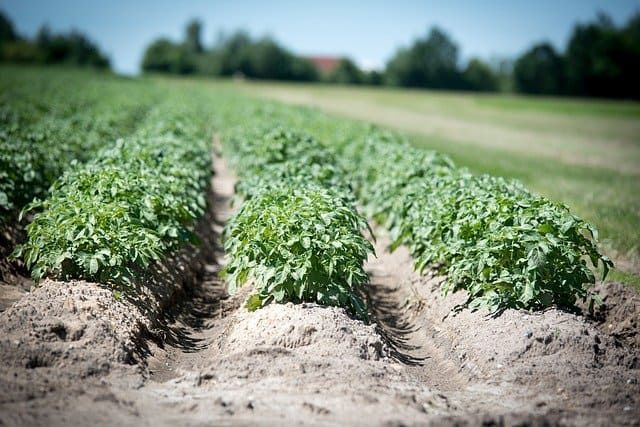 Remove the soil from the base of the plant and take the potatoes that you need. After harvesting, remound the soil around the plant.

After harvesting apply a fish emulsion fertilizer to the plants. This encourages a new set of tubers and fresh growth to form.

If you are growing your potatoes in a container such as Delxo 7 Gallon Grow Bags which have a harvest window, simply lift the flap and remove the earth until you find your potatoes. After you harvest what you need the earth can be replaced and the remaining potatoes can continue to grow until you are ready to use them.

When harvesting and handling potato plants you may see small potato seeds amongst the leaves. They often resemble green, cherry tomatoes. These are toxic and should be destroyed or placed on the compost heap.

How to Harvest your Maincrop

For larger plants you will probably need to use a garden fork to lift the entire plant. Insert the fork into the soil about one foot away from the center of the plant. Push as deeply into the soil as possible. You are aiming to lift the entire root mass as one. You may need to insert the fork a few times before you can do this. Remember to check the soil after lifting the plant for any potatoes you may have left behind.

After harvesting brush away any dirt and allow the spuds to dry for a few hours before using or storing.

Maincrop potato plants growing in containers can be harvested simply by tipping the contents of the container out onto a sheet of tarp. You can also empty the soil into a wheelbarrow. Sift through the soil to gather all your spuds.

If you are harvesting maincrop or potato tubers for winter storage, dig up a few to test them before harvesting the entire crop. The skins should be thick and firmly fixed to the flesh. If the skin can be easily rubbed from the plant the tubers are too new and should be left in the ground for a few more days.

When harvesting be careful to not bruise or cut the crop. Damaged tubers rot during storage.

After harvest cure the tubers by letting them sit in a dry position for around 2 weeks. During this time the temperature around the crop should average 45 to 60 ℉. As the potatoes cure their skins harden and minor cuts seal up. After curing you can then store your tubers. If you are unsure how to store your potatoes after harvesting, this is a great in-depth guide.

When harvesting potatoes or removing them from storage, always check the color of their skin. Avoid any green tubers. These have an increased level of alkaloids, usually caused by too much exposure to light. Green spuds can also contain solanine. This not only turns them bitter but is also poisonous. To avoid greening keep your potatoes in as dark a position as possible. 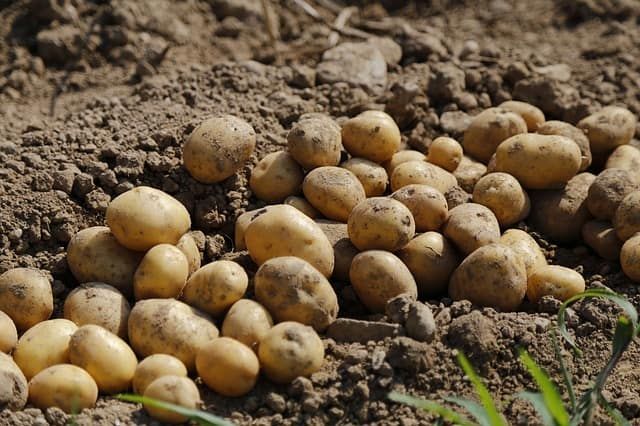 Full of flavor, for many a potato crop is the cornerstone of the vegetable garden.

While growing potatoes can take up a lot of space, and may also require an efficient crop rotation system, it really is worth the effort. Freshly harvested potato tubers are more tender and with a richer flavor than store purchased spuds. They are also one of the easiest crops to grow and harvest. 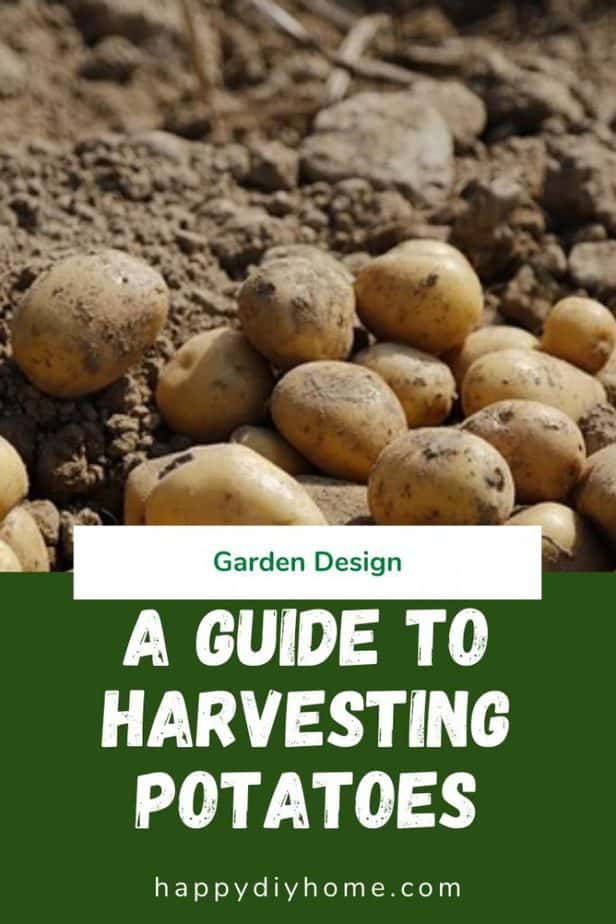 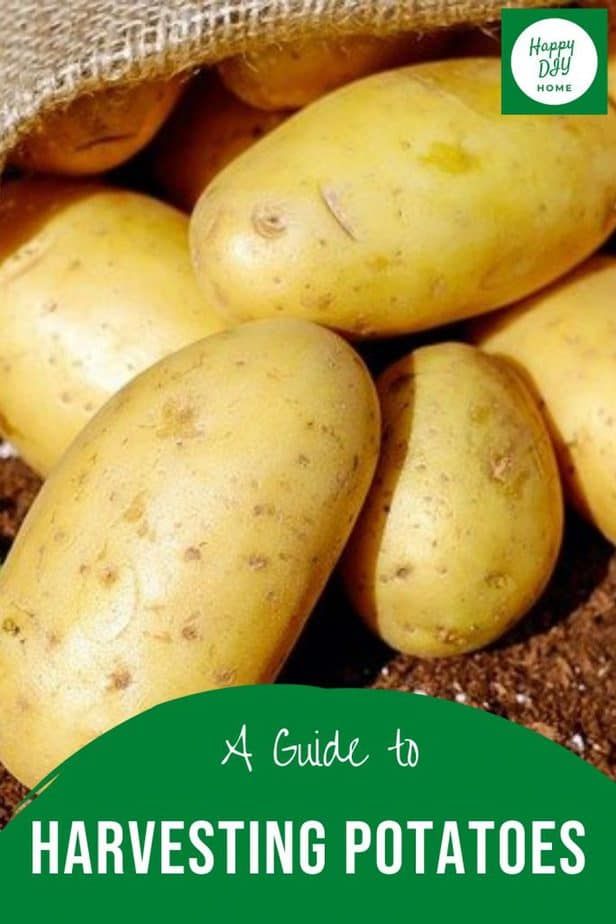