The pink quill plant is known as Tillandsia cyanea, and it’s a very versatile, easy-to-care-for, hardy, tropical houseplant. As part of the Bromeliad family and unlike the majority of plants in this species, it can grow as an air plant and in a pot. Under the right conditions, this plant will give you a showy display over long-lasting, large pink bracts that look like ink quills. This is where the common name comes from. The bracts add a lot of interest to this plant, and they’ll last for several months once they appear to allow you to enjoy the vibrant colors. You can also appreciate the smaller but pretty violet-hued flowers that come out in the late summer months, but they only last two or three days.

Pink quill will take a few years to reach full maturity, and it won’t bloom until it does. This is why a lot of people choose to buy mature plants at the flowering stage instead of waiting. As the bracts grow, they go from ink to green, and when they start to die back, the plant will start to die. However, if you want to appreciate your blooms and bracts more, it’s easy to propagate this plant. So, you can grow several generations of blooms.

In the native tropical rainforest, pink quills will grow on trees as an epiphytic species. Having the option to put it in a pot instead of having to secure it to other objects, like wood, or attach them with wires, makes this plant very appealing for gardeners. We’ll outline how to keep it happy and growing below. 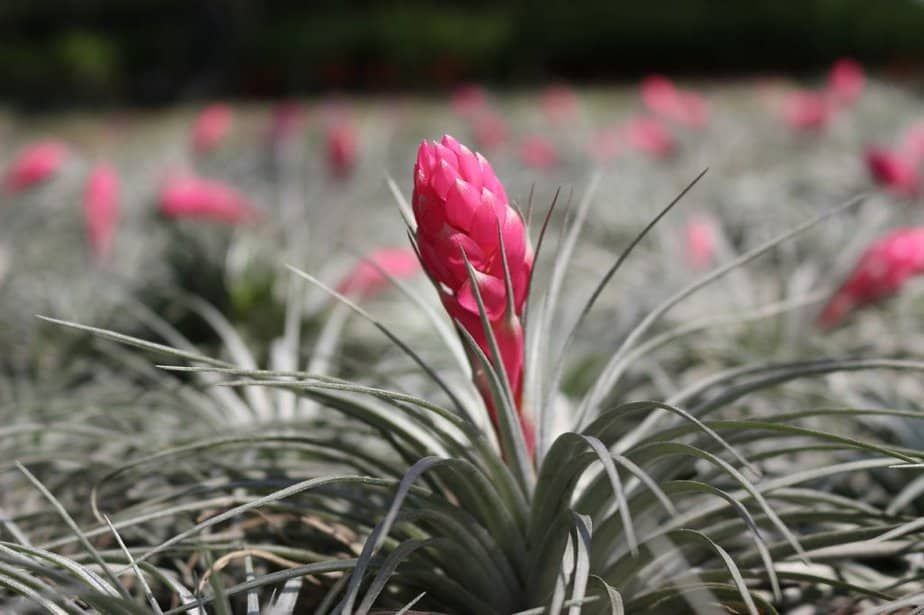 The pink quill plant can be a very eye-catching specimen if you’ve never seen one before, and it’s a very versatile tropical houseplant.

Characteristics of the Pink Quill Plant

The pink quill plant has many defining characteristics to it, and knowing what they are can help you pick this member of the Bromeliad family out.

There will be several purple, blue, or pink flowers that appear on the sides of your plant’s flowering bract. This plant may only have one or two smaller flowers open at a time, and they are very short-lived. They usually only stay open for one to three days at most.

The biggest draw for the pink quill is the flowering bract, and it’s often bright pink and quill shaped. It tends to wave around looking alien-like, and it naturally draws your eye. The bract can usually flower for six months, but the color will fade and slowly turn to green. Many people choose to buy these plants at the flowering stage. However, if you choose to grow a young plant, you can expect the bract to appear when they are between three and four years old.

If you include the bract in the mature plant’s final height, it’s usually not more than 10 inches tall with an 8 inch spread. If you allow multiple offsets to grow at the same time, the spread will be wider as the years go on.

Once fully grown, this succulent is quite a small plant. It takes between two and three years for a young offset to get to the flowering stage, but the plant grows quickly for its size. You do have to think in relative terms with the pink quill plant in terms of speed of growth though because the final size is quite petite. 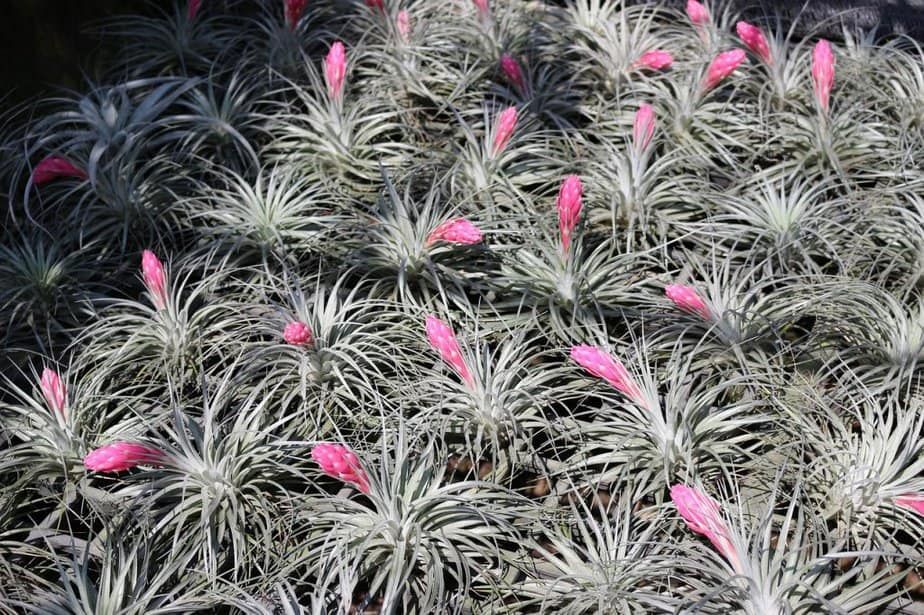 These are slightly more compact plants that look very pretty as a hanging plant or in a pot, and you won’t need a huge amount of room for them to thrive.

With any Tillandsia plant, their key care requirements involve getting the correct balance when it comes to watering and light. If you manage to do this, pink quill sho give you a long-lasting and vibrant display of bracts.

Most people won’t fertilize air plants or bromeliads, but you can do it once a year if you think the plant really needs it. In nature, pink quill will get all of the nutrients and moisture it needs through the foliage instead of the soil. This is why it’s best to spray a liquid fertilizer onto the surface of the growing medium and the foliage if you do decide to add it.

You can get an all-purpose orchid fertilizer that you dilute to ½ the strength, or you can find fertilizer for air plants. You want to add it in the spring or summer, and once or twice a year is usually more than enough. They do require good air circulation, and they’re not picky about it being cool or warm.

Pink Quill is one tillandsias that likes to be put in a very well-draining growing medium instead of epiphytically. Although, it will survive and grow well epiphytically. When you grow them in soil, the pink quill will develop a sturdy root system. They grow very well in a mixture of sphagnum moss and epiphytic mix. This medium allows the plant to tolerate frequent watering sessions and expand the roots.

You could also plant the pink quill in orchid bark or in a cymbidium mix. When you’re planting it, make sure that you get them room to expand and branch out. It’s not uncommon for the plant to produce between 10 and 12 offshoots as it grows. However, this can take several years.

Bright, good natural light is best for the pink quill. Putting it in a space where it gets east or west exposure is best. You want it in these brighter lighting conditions to bring the flowers out and encourage the plant to thrive in the long run. Be sure to avoid any direct, strong sunlight as it will burn the plant.

It shouldn’t surprise you that this tropical plant prefers to be in warmer conditions. The ideal minimum temperatures to encourage it to bloom and produce the bract is right around 75°F. They also aren’t fans of dry conditions, and if there isn’t enough humidity, the foliage will get brown tips.

Although pink quills won’t need as much water as the average houseplant, they do need more than the majority of Tillandsia species. If you pot them, depending on how dry the conditions are and the time of year, they need watering anywhere from once every few weeks to once every few months. Some people do recommend a deep watering session before removing any water that runs through, they agree that regularly misting is better. Soggy roots are one huge issue with the pink quill plant, and it can cause health problems for the plant.

In warmer weather during spring or summer, gently mist the plant once a week and allow the runoff to get the roots wet. Always let your potting medium dry out before you water it again, and if you doubt the moisture level, it’s always better to underwater it than overwater it. During the colder months, cut back even more on your watering sessions. They’re chlorine-sensitive, so you want to use filtered tap water or rainwater. Most tap water has chlorine in it, and this can easily damage your plant if you water it with it. So, try distilled, filtered, or rainwater instead.

To learn how to propagate the pink quill plant correctly, you have to understand the general life cycle. You can summarize this as:

This means that your pink quill will, eventually, die. However, you get to enjoy the colorful bract and foliage for months at a time before it comes to this point. After a while, the vibrant bract will start to turn green. This lets you know that the plant is done flowering. The flower head starts to turn green because chlorophyll will overtake the colored pigments. The quill will stay green for a few months before it’ll turn brown or yellow. At this point, you want to remove it as it’s rotting. If you keep it attached to the plant, it’ll continue to pull nutrients from the healthy areas of the plant.

How to Remove Pups

Removing the pups from the main plant can be a challenging process if you’ve never had to do it before. When you remove this pup from the mother plant, it’s best to get a pair of sharp scissors or garden clippers. You want to cut the pup as close to the mother plant as you can. This pup most likely won’t have roots yet, but it’ll form them very quickly if you put them in the correct potting mix.

If you don’t have scissors or garden clippers on-hand, you can hold the mother plant in one hand and pull the pup away with the other. Apply pressure side-by-side to remove the pup, and it should pop off. If it breaks off too far away from the main plant, you can dip the end into rooting hormone to try and salvage it. All the end to callus over before you put it in potting soil. Once you get the pup off of the mother plant, put it in a well-draining potting soil mixture. You’ll need to keep the soil moist and give it enough light to encourage new growth. 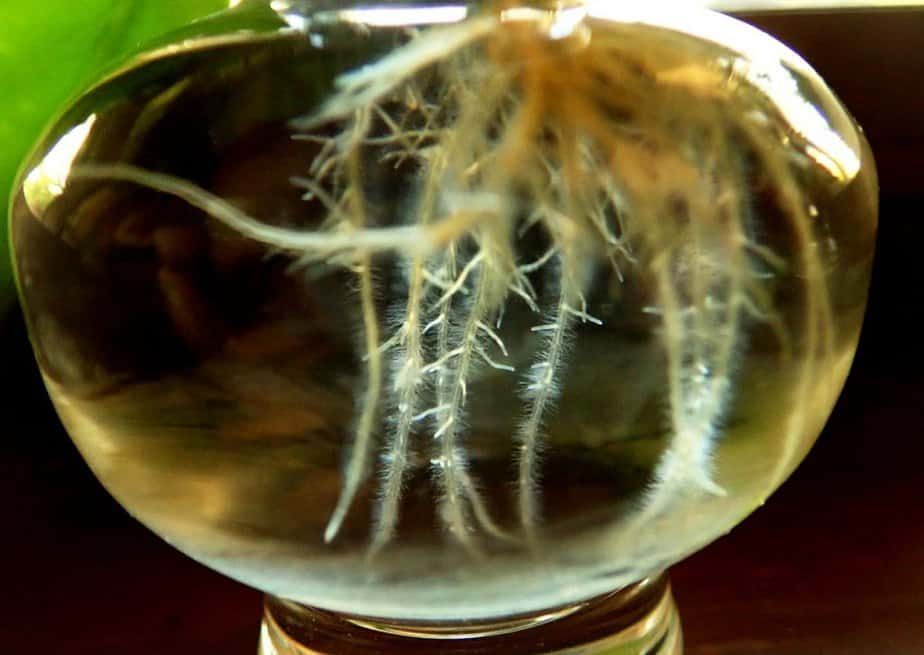 Applying rooting hormone to the pups when you pull or cut them from the mother plant can  help encourage quicker propagation.

If you purchase a pink quill plant that is flowering, you won’t need to repot it. If you are growing a pup, however, you’ll repot and upsize the pot once each spring if the roots start to fill the pot. Don’t be concerned if the roots don’t fill the pot as the root system on this plant is very compact and basic. You’ll want a small amount of space for new roots to come through, and if there is in the current pot, leave it alone. The potting mix you pick out has to drain freely, and you can get this with a standard potting mix by adding a little perlite or grit.

Pink Quill usually doesn’t have many big issues with diseases or pests. Once in a while, you may have an issue with aphids, but there are several ways you can go about getting rid of them, including applying insecticidal soaps or washing them off.

While this plant isn’t invasive or toxic, cats and other small pets can experience digestive upset after they chew on the leaves. A few other issues that are very common with pink quill include too cool temperatures or too much water. If the plant gets too much water, it will start to die very quickly. Common signs that you’re overwatering your pink quill including the flowers starting to fall off or the leaves starting to droop. To save the plant, move it to a sunny windowsill and stop watering it.

This plant can also suffer if the temperatures dip too low. If the temperatures stay around or below 59°F, the fan flower can quickly start to die off. You want to keep it in a bright spot and monitor it. If the plant dies from one of these common issues, you can propaga a new pink quill using the plant’s offsets.

The pink quill plant is a flashy but compact tropical plant you can add to your collection fairly easily, and it’s not a high-maintenance specimen. If you purchase it at the flowering stage, you can enjoy the bright color while getting pups that you can propagate to several new plants in a few short years.