The small, green grasshopper is a common sight in gardens and grasslands. Popular with insect loving children and adults alike there are over 11,000 different types of grasshoppers across the world. Interestingly these small insects are probably over 200 million years old.

If you want to learn more about the grasshopper, this article is designed to not only explain exactly what these little insects are, we will also highlight some of the most commonly found types of grasshoppers. 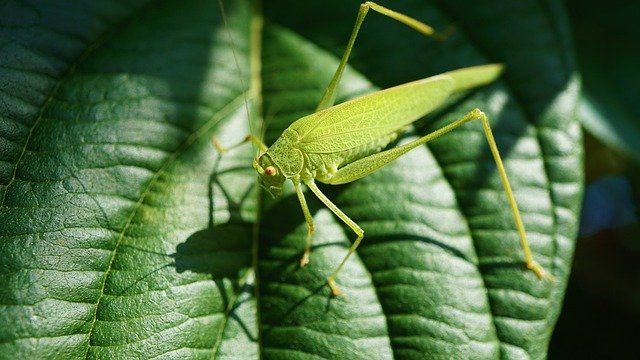 The grasshopper is one of the most recognizable insects.

What is a Grasshopper?

While you may think that all types of grasshoppers look the same, small green insects, you would be wrong. These little insects can vary in both size and color.

The grasshopper can vary in size from less than one inch long to almost 3 inches. While most types of grasshoppers have green bodies, some can be brown or black in color. The size of both the hind legs and hind wings can also vary. Grasshopper eyes, while always large, can be either green, gray or brown. Finally, the size of the antennae, one of the grasshoppers most distinguishing features, can also vary.

As well as differences between species, the male grasshopper can also differ in appearance from the female. Typically the male has more brightly colored wings. This helps them to attract a female as well as acting as a form of defense. 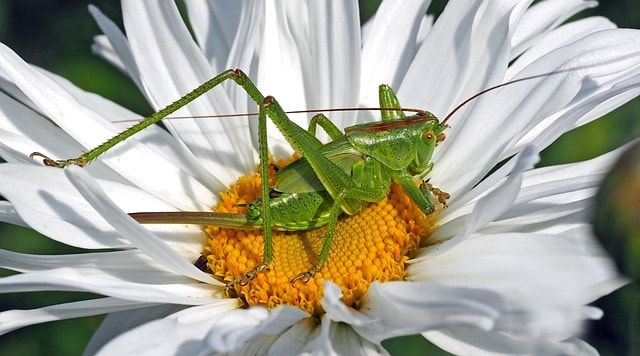 Depending on the species, the appearance of the grasshopper can vary.

Many types of grasshoppers can leap around 20 times the size of their body. Some can also fly, reaching speeds of around 8 miles per hour.

Typically found in warmer regions, these colorful insects dislike cold weather. This means that they are more active during the summer months. Preferring the evening or night time to daylight, the grasshopper spends the summer nights feeding.

Most types of grasshoppers feed on parts of plants such as stems, leaves, petals and seeds. However, some species are fussier than others, preferring to sample their food before eating it.

Causing severe defoliation, it can be difficult to protect plants from grasshopper attacks because foliar insecticides can also impact detrimentally on useful insects and pollinators such as bees and butterflies.

One way to reduce the impact of the grasshopper is to regularly water your garden. This not only reduces stress caused by drought it also slows down the rate that insects eat your plants. Constructing your own rainwater collection system enables you to keep your garden green and watered without running up a large water bill.

Most types of grasshoppers prefer green and healthy grass to garden plants. Keeping your lawn healthy is a good way to protect your plants from these destructive insects. If you don’t mind leaving an area of grass uncut, a border of tall grass around the edge of your yard provides most types of grasshoppers with a food source, meaning that they are more likely to leave your plants alone.

Should a grasshopper infestation develop, apply insecticidal soap to the affected plants. Homemade insecticidal soap is both effective and safe to use anywhere in your garden. You can also hand pick the insects from the plants and dispose of them.

Keeping chickens, if you have the space, is a good way to keep grasshopper numbers down. Chickens like nothing more than roaming the garden, looking for grubs and insects such as grasshoppers. You can also protect crops and plants by covering them with Garden Mesh Netting during the summer months, when the grasshopper is at its most active.

Building a bug hotel encourages a range of insects to inhabit your garden, providing a natural way to keep grasshopper levels to a minimum.

Types of flies that lay eggs near grasshopper eggs can threaten the survival of local grasshopper populations. Some species can even lay eggs on top of the grasshopper’s body during flight. As a form of defense many types of grasshoppers can emit a spit known as “tobacco juice”. Other grasshopper predators include mice, snakes, birds, beetles and spiders.

Now that we have established what a grasshopper is, here are some of the most commonly found types of grasshoppers.

The Long-Horned Grasshopper, also known as the Bush Cricket, is a member of the Tettigoniidae family. Part of the Orthoptera order of insects, there are around 6,000 recorded different types of Long-Horn. These distinctive types of grasshoppers can be identified by their long, slender horns.

Most types of grasshoppers in this family are green with long wings. Their habitat consists primarily of trees, shrubs and bushes. Unlike other types of grasshoppers, the tympanum (hearing organ) of Long-Horns is situated on their front legs. The antennae are hairy and are as long as, if not longer than, the body. Despite this they can be easily camouflaged.

Long-Horns are most active at night. This is also the period when they tend to create the most noise. 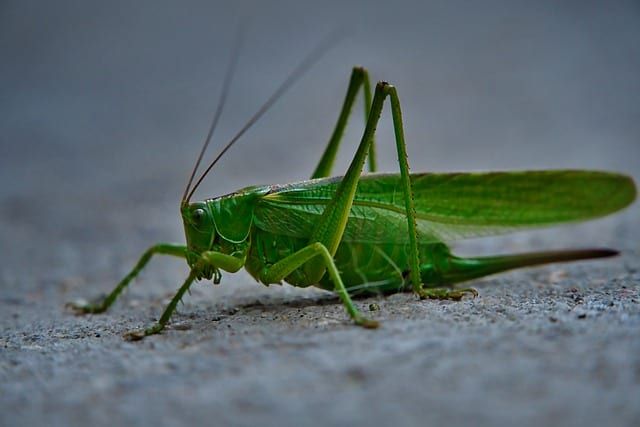 Long-Horns are named for their long antennae.

Female Long-Horns have a pointed ovipositor which helps them to lay eggs in underground chambers. The long wings of the female can often be a different shape to those of the male. Male Long-Horns produce female-attracting songs by rubbing their wings together.

Long-Horned types of grasshoppers are most active during warm weather.

The Katydid is one of the most well known Long-Horned grasshoppers. Identified by their long antennae, large hind legs and thick, curvy ovipositor, Katydids are named for their distinctive song, which sounds like “katy did, katy didn’t”. The insects typically sing when reproducing or defending their territory.

Most Katydids are 1 to 2 inches long, however the Matriarchal Katydid can reach 4.5 inches long. Typically bright green in color, some types of Katydids can be pink or yellow. 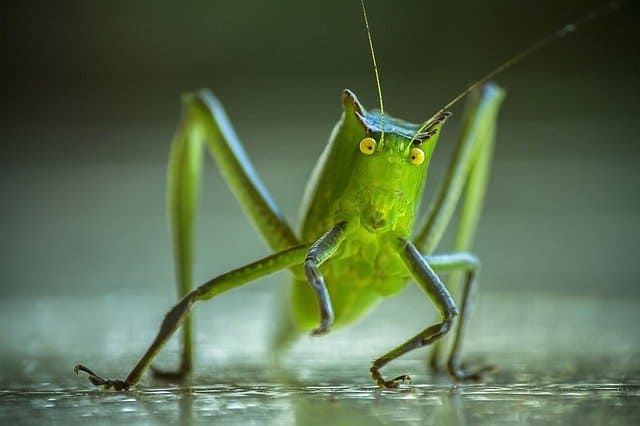 The Katydid is one of the most common types of Long-Horns.

Commonly found in western parts of North America the Shield Back Katydid can often be seen in open fields as well as farmlands, forests and woodlands during the summer and early fall months. Once winter begins, Shield Back Katydids enter a dormant period.

The Meadow Grasshopper is a small to medium sized insect that is commonly found near water bodies such as lakes and ponds as well as meadows and pastures.

A small insect with a slender body, they typically develop in stages, starting as wingless nymphs, which are a common sight in pastures during the months of April or May, before maturing into winged adults in June. Their green bodies help the Meadow Grasshopper to blend into its surroundings. Some types may also have gray-brown stripes around their eyes. As they age the Meadow Grasshopper sheds their exoskeletons. Meadow types of grasshoppers make a distinctive “rrr” sound when mating. 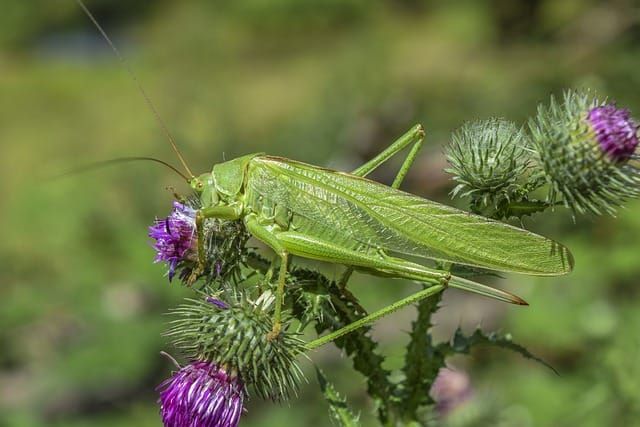 Their coloring helps the grasshopper to blend into its surroundings.

Cone-Headed Grasshoppers, as the name suggests, have a distinctive cone-shaped head. Light green or brown in color with slender bodies, these Long-Horned types of grasshoppers favor grasslands and weeds.

Like other Long-Horns, Cone-Heads have a specific song, which helps us to identify them before we can even see them. The song of the Cone-Headed Grasshopper is a one note song which is repeated to produce a melody. These types of grasshoppers can be found in many parts of North America as well as the warmer regions of South and Central Europe.

Members of the Acrididae family, Short-Horned types of grasshoppers belong to the Orthoptera insect order. As the name suggests, Short-Horns have short but heavy antennae. Rarely exceeding 4 inches in size their bodies are typically green or straw colored. This makes it easy for them to camouflage themselves in their surroundings.

In addition to their small antennae, Short-Horned types of grasshoppers can be identified by their long hind legs and femurs. These elongated limbs help them to jump long distances. The females have a four-valved ovipositor, which helps them to lay eggs in protective underground chambers, and a tarsi made up of 3 segments.

The Short-Horned Grasshopper is a herbivorous insect, with a reputation for being vicious. A number of types of Short-Horns lack wings, meaning that they are flightless. If present, the males can rub their wings together to make a sound. 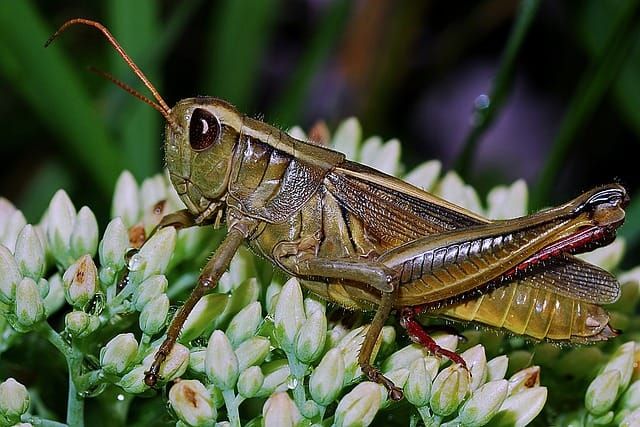 The length of the antennae helps us to differentiate between different types of grasshoppers.

The Spur Throated grasshopper is one of North America’s most commonly seen types of Short-Horned grasshopper. The females of the species can lay up to 20 eggs in the soil each year, sitting on them over the winter months. After hatching in the late spring, Spur Throated nymphs mature in early summer.

The Spur Throated grasshopper comes in a range of colors, including red, brown, yellow, orange and green. Some can have a range of colorful stripes on their bodies while others may be spotted. These colorful insects are typically seen in meadows and open fields. During the summer months they can also be observed flying between locations. 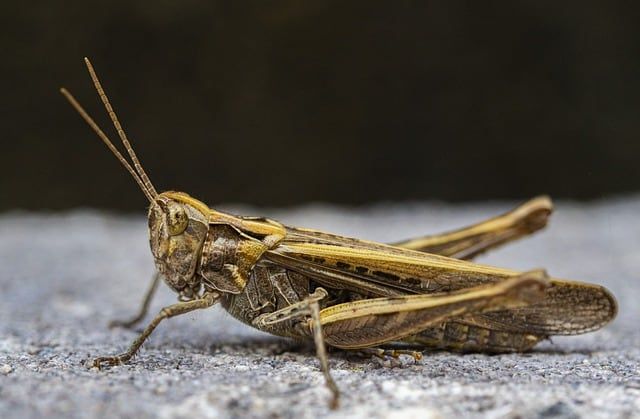 Spur Throats come in a range of different colors.

Another Short-Horned grasshopper, the Lubber is a common sight in southeastern parts of the United States. In the state of Florida Lubbers are notorious for destroying vegetable crops. Easily identified by their large, colorful bodies, unlike other types of grasshoppers, Lubbers are often described as being slow and clumsy. They often prefer to walk or crawl instead of jumping or flying like other types of grasshoppers. Their name, Lubber, refers to this habit. Lubber is an old English word meaning lazy.

Migratory Grasshoppers are common to North America, where these Short-Horns can inhabit a range of habitats including meadows and grasslands. Herbivorous insects, the Migratory Grasshopper has a reputation for being a destructive insect, capable of destroying large swathes of vegetation in a surprisingly short period of time. As the name suggests, Migratories migrate and disperse, moving between habitats on a regular basis. 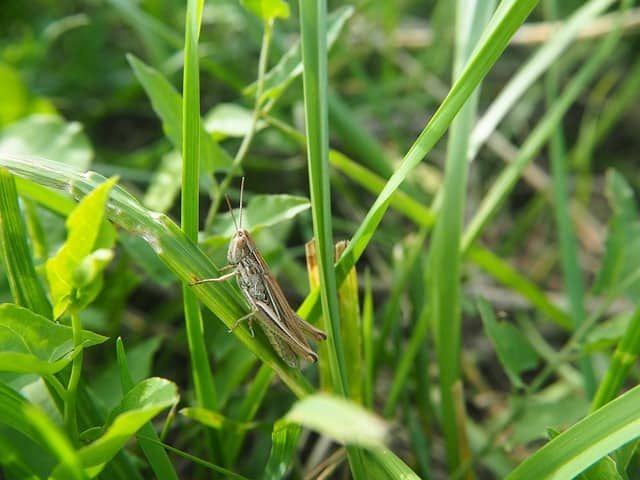 The Migratory Grasshopper likes meadows and swathes of long grass.

The Band Winged Grasshopper is named for its colorful hindwings. These can be patterned in shades of black, red and yellow. The only type of Short-Horned Grasshopper that can produce a range of sounds, when in flight they create a crackly noise. When not in flight the colorful hindwings are hidden by the plainer forewings, helping the Band Winged to blend into its surroundings.

The Slant Faced is named for its slanted face.

A common pest not many people realize that the Locust is actually a type of Short-Horned Grasshopper. Generally solitary in nature, conversely adult Locust can often be seen in large groups laying waste to vegetative growth or crops. One of the fastest types of grasshoppers when in flight the Locust can cover long distances in an incredibly short amount of time. 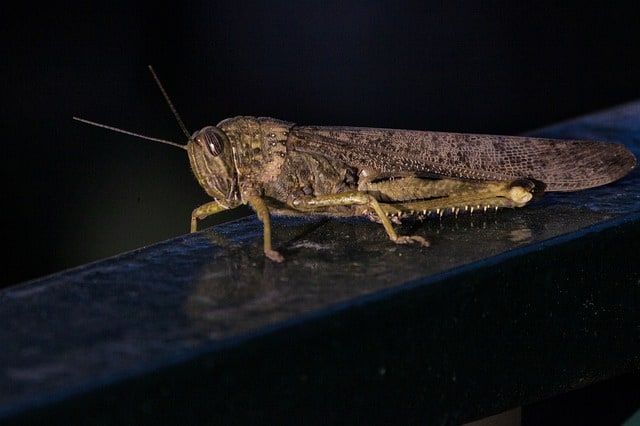 The Locust is a destructive pest.

The Pygmy Grasshopper, also known as the Grouse Locust, is a small insect which can be either brown, gray or green in color. A dimorphic insect, the forewings, if present, are small.

One of the smallest types of grasshoppers, the Pygmy rarely exceeds 0.6 inches in length. When it comes to laying its eggs, the Pygmy differs from the Short-Horned Grasshopper, preferring to lay the eggs in small grooves in the soil instead of underground chambers.

Unlike other types of grasshoppers, Pygmies lack both sound producing and hearing organs. They are commonly found in large patches of short grass or in muddy areas. 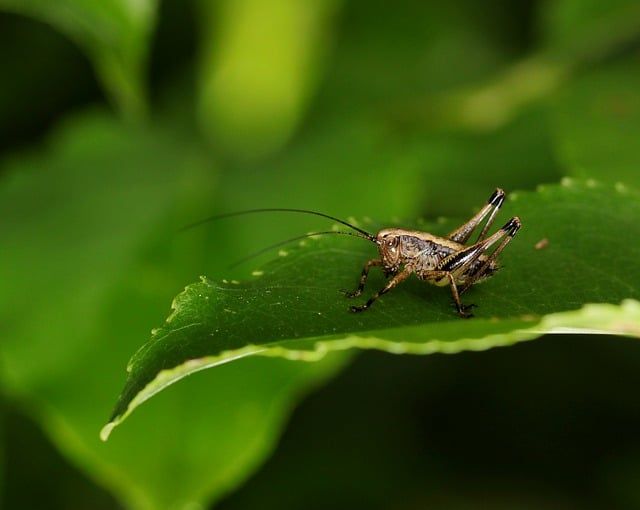 The grasshopper comes in a range of colors and sizes.

One of the most well-known bugs, as you can see, there is far more to the grasshopper than meets the eye. 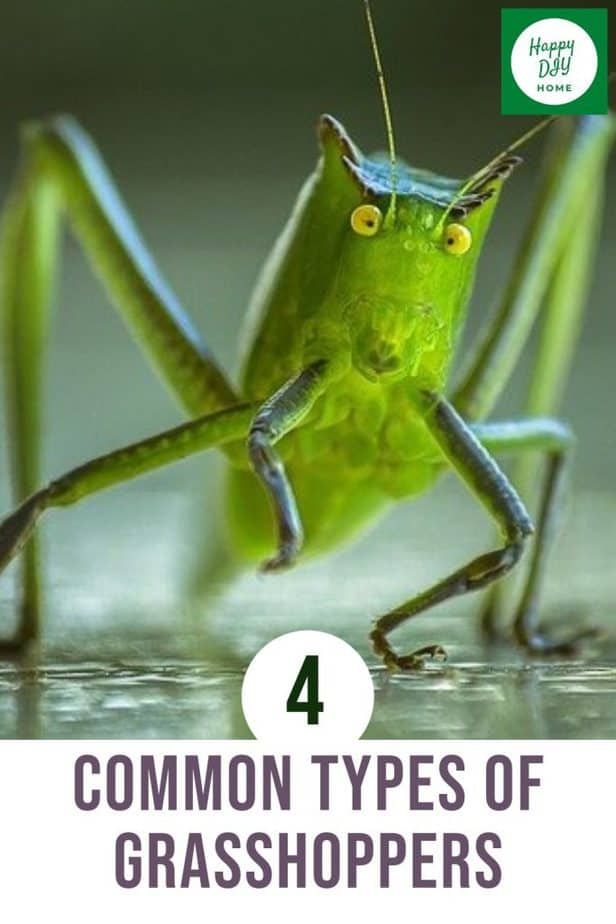 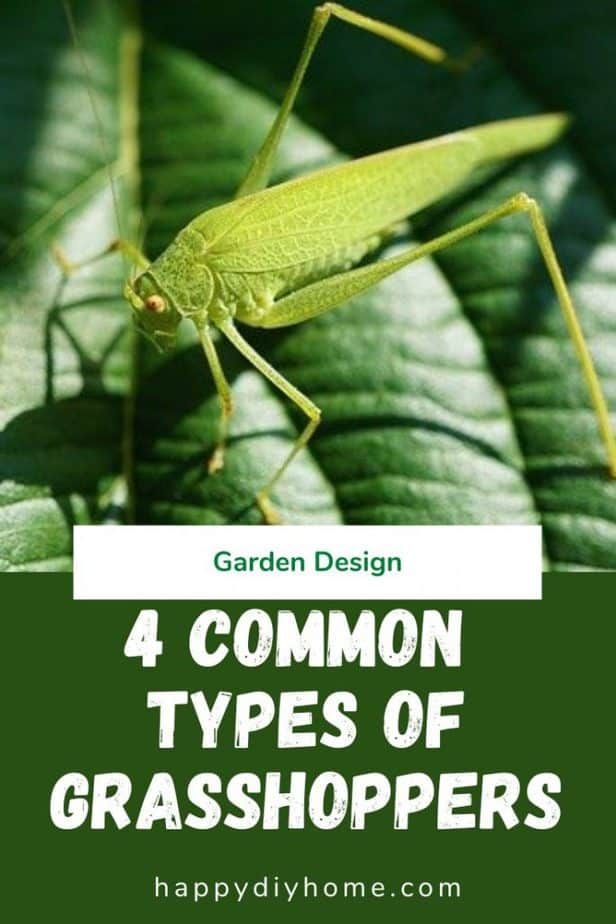