Witch hazel is a very underrated shrub that is a fantastic addition to many gardens. It flowers during the winter, something very rare, and provides great fall color with yellow, red, or orange leaves.

The bark of the witch hazel plant is also a staple in herbal medicine. It has a wide range of uses, mainly for skincare.

If you’d like to add winter interest to your garden, here’s a complete guide on how to grow and care for witch hazel plant.

What Is Witch Hazel?

Many people aren’t familiar with witch hazel (Hamamelis sp.) as a landscaping shrub, although you may have heard of it as an ingredient in skin toners and other products.

Witch hazel is a native plant in the U.S. that grows into a large shrub or a small tree. There are also varieties native to Japan and China. Without pruning, plants will grow 15-30 feet tall with a similar width.

Native shrubs are most often found in wooded areas along the east coast of North America, from Canada to Georgia. There is another species that grows in Arkansas and Missouri. 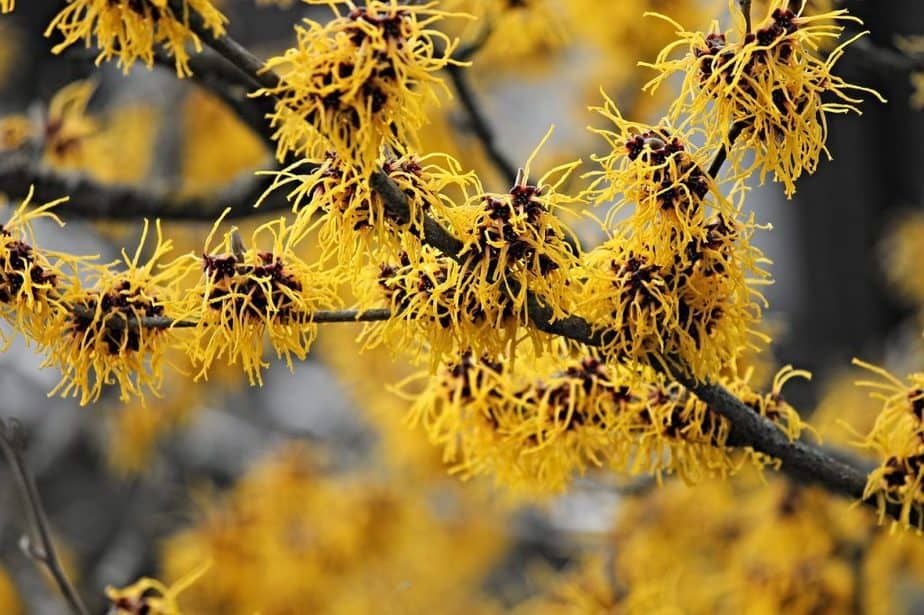 Witch hazel is one of a small group of plants that bloom during the winter when most of your garden is dormant. The bright flowers bring welcome color during gray days.

The native species of witch hazel has its own attractions in the landscape but is still mainly grown so that the bark can be harvested for medicinal uses. Hybrid cultivars have been developed that are showier and more widely used as ornamental plants.

Whatever type of witch hazel you choose to grow, plants will put out bright green leaves in the spring that turn yellow, red, or orange in the fall. Fragrant flowers will then appear and bloom sometime between October and December or January and March.

The witch hazel plant has a long history of use both as an ornamental shrub and a valuable medicinal plant. You can grow it for either one of these purposes or both.

Native Americans highly valued the inner bark of the branches. They would boil it in water to make an astringent concoction used for all kinds of skin ailments. The properties of the bark can also be extracted using alcohol or steam distillation to make witch hazel extract, popularly used in all kinds of skincare products.

The branches of the witch hazel shrub also had another use. It was believed that forked branches could be used to find underground water sources.

People called dousers would cut specifically shaped sticks off of the shrubs and walk around a location to find water. They would hold the branches parallel to the ground, and if the forked stick started pointing downwards, that indicated the presence of water. 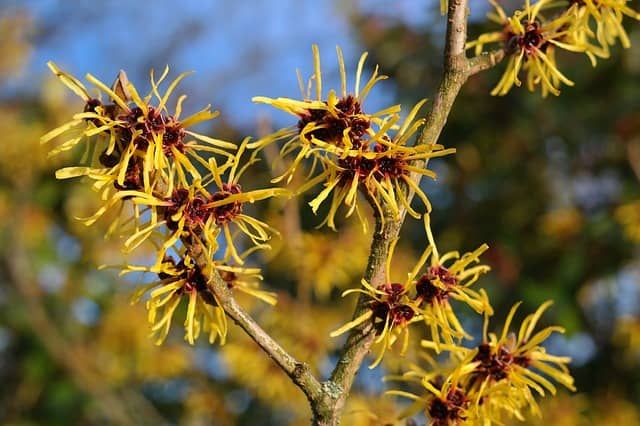 Witch hazel has a long history of use as more than a landscape plant. It was believed that forked branches from the shrubs could be used to find underground sources of water.

There are four main species of witch hazel commonly grown as landscape plants. Two are native to North America and two to Asia. There’s also a popular hybrid variety that has the showiest appearance.

There are plenty of witch hazel cultivars to choose from. If you really want to grow the plant to use the bark, go with the straight species Hamamelis virginiana. Different cultivars will give you different options for both flower color and foliage color in the fall. The most popular varieties are highly fragrant, colorful, and bloom profusely.

If you want to grow witch hazel mainly as a landscape plant, here are some of the best cultivars to choose from: 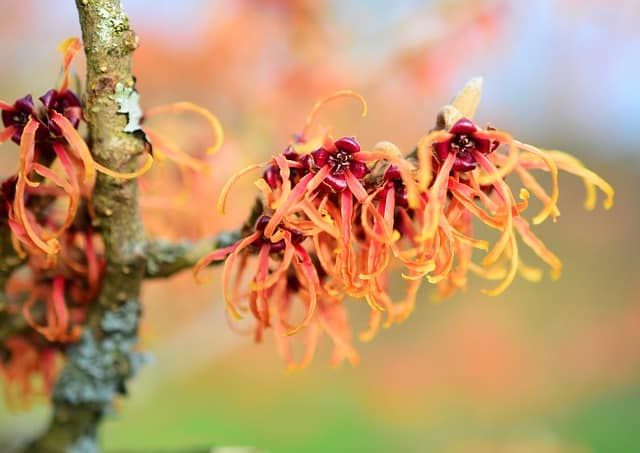 Different cultivars will have orange, yellow, or red flowers. Most of the hybrid varieties bloom from January to March. American witch hazel blooms October to December.

How to Grow Witch Hazel Plant

There are a few ways to grow witch hazel. The easiest is by growing it as a several year old potted shrub, but you can also try your hand at starting it from seed (if you have a lot of patience).

If your local nursery carries witch hazel, you can simply buy a potted shrub that has already been growing for a few years. Typically, a few different sizes will be offered with the larger ones costing more.

If you can’t find anything locally, some online plant stores will ship potted plants. Before buying, you can ask about how long it will take the shrubs to flower after you plant them at home. Large ones may flower right away, while smaller ones may take a year or two.

Many online nurseries will ship bare root witch hazel. This simply means that the roots are exposed rather than being in a pot with potting soil.

Bare root plants are often easier to ship because they weigh less than plants that come with a pot and soil. You plant them in a similar way to potted plants.

Growing witch hazel from seed is a time consuming process, but it can be done if you want to try an experiment. Seeds can take as long as 18 months to 2 years to germinate, so this is definitely not the best method if you want a full grown shrub this season.

Also, keep in mind that it will take about 6 years for witch hazel started from seed to grow to a large enough size to flower.

You’ll need to mimic the seasons witch hazel seeds would go through in nature. Take your seeds and place them in a container or plastic bag with a soilless growing mix or another medium like sand. Make sure to get your medium damp before adding the seeds.

Place your container or bag with the seeds somewhere that gets about 85°F for 2-3 months. The best way to do this is to keep it in a warm shed during the summer, but you can also use a heater. 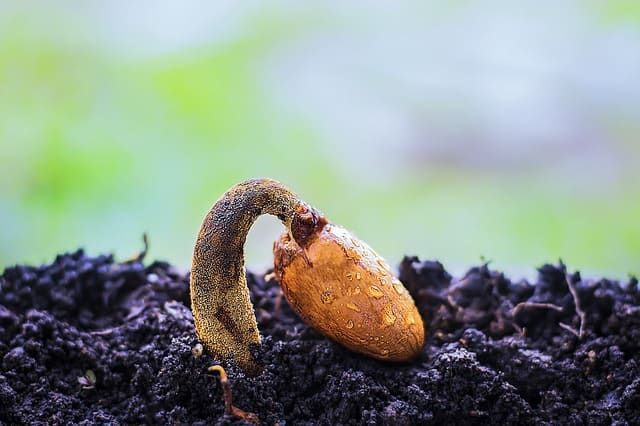 Growing witch hazel from seed can be done but it will take a lot of patience. Seeds normally take 18 months to 2 years to germinate in the wild.

Then, place the container or bag into your refrigerator for three months. Make sure the soil or sand stays damp (not soggy) the whole time. Add some water if it dries out.

At the end of three months, you can plant your seeds outside when temperatures reach 70-75°F. They may germinate in another 2-3 months, but it could take another cycle of hot and cold before they sprout.

Once your seedlings have had time to grow, you can transplant them to more permanent spots where they will grow about 6-12 inches per year.

If you purchased a potted or bare root plant, you can put it in your garden in spring after your last average frost date. In milder regions, witch hazel can also be planted in the fall.

Witch hazel can be grown in either full sun or partial shade, but too much shade will mean sparse flowering. In hotter climates, try to give your plants some shade during the afternoon.

The shrubs like moist but well-drained soil. They will tolerate a range of conditions but don’t always do very well in heavy clay soils. You can amend your soil with compost or sand before planting to improve drainage and texture. 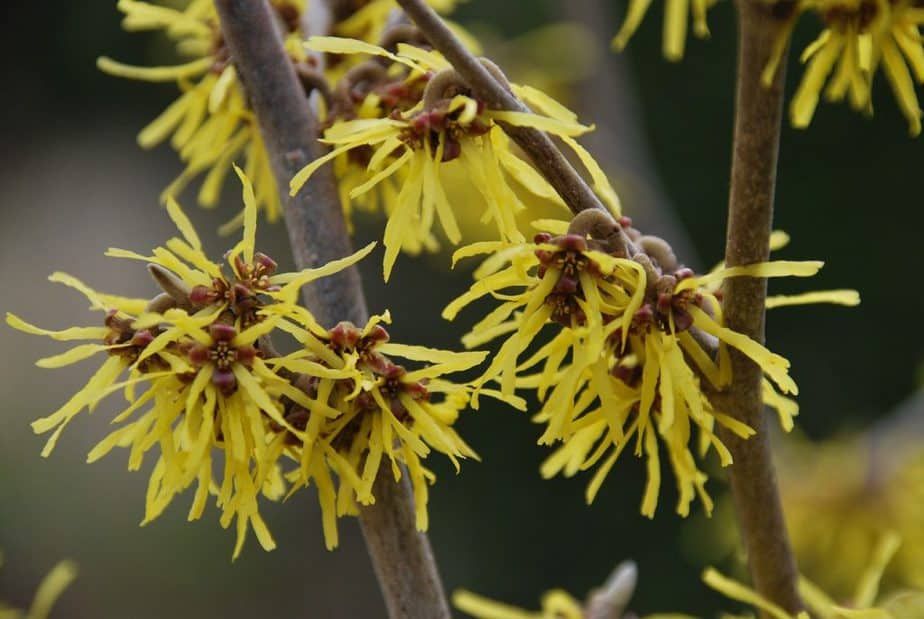 Depending on how old your witch hazel plants are, they may or may not bloom the first year you plant them. Ask at the nursery you buy them from how long it will take them to flower.

Witch hazel prefers slightly acidic soil. If yours is on the alkaline side, there are some ways to make your soil more acidic like adding peat moss or an acidic fertilizer.

Plants are cold hardy but do best if they are protected from harsh winds.

You can grow witch hazel in a container, although larger varieties may need to be planted in the ground after a few years.

How to Plant Witch Hazel

The planting method for both potted and bare root plants is similar. If you can’t plant right away, keep potted plants watered. Store bare root plants somewhere cool and keep the roots moist. You can also put them in a pot with moist potting soil.

Once it’s time to plant, water your containers well or soak your bare root plants for a few hours while you get the planting site ready.

If you haven’t already, amend your soil as needed. You can then dig holes that are slightly deeper than the root ball and wide enough for the roots to spread out. Bare root plants will probably have a wider spread and need wider holes.

Gently plant each shrub so that the top of the root ball is level with the ground and just covered with soil. Firm the soil around each plant and water them all in well. 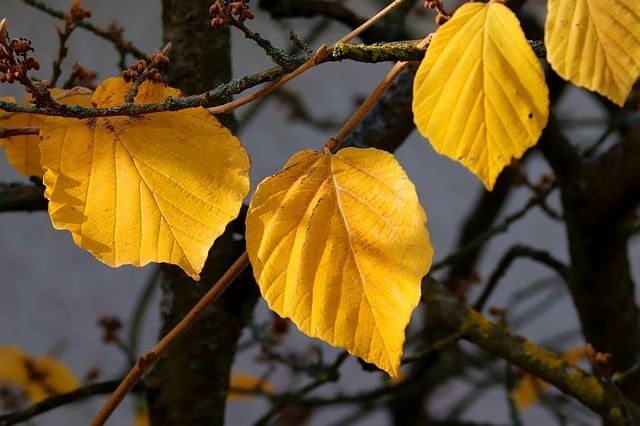 Once established, witch hazel shrubs will provide year round interest in your garden. They have bright green leaves in spring, lovely fall foliage, and attractive winter blooms.

Witch hazel likes to have consistently moist soil. Be sure to water your new plants during the summer anytime the weather gets dry.

Mulch can help keep soil moisture in and will also keep weeds down. You can use a shredded bark mulch or something simple like pine needles. Leave space between the mulch and the trunk of your shrubs so that the bark doesn’t start to rot.

Witch hazel is a very low maintenance plant, so your only other chore is pruning.

Left to themselves, most witch hazel plants will grow into small trees. They can be kept at shrub-size and structured the way you want them by pruning. You’ll also need to prune dead and crossing branches off each year to keep plants healthy.

Do your pruning in springtime after plants have finished flowering.

Witch hazel plant tends to be largely pest free and disease resistant. They aren’t completely deer resistant, but these large pests usually eat them only as a last resort. You may want to protect young plants with chicken wire until they have a chance to mature.

Aphids will sometimes attach witch hazel. They usually don’t do enough damage to cause harm, but a large infestation can be controlled with a horticultural oil. Witch hazel rarely has pest or disease problems. Even deer don’t find the shrubs very attractive to eat, although they may munch on them as a last resort.

Leaf spot and powdery mildew can show up on the leaves when conditions are damp. They will rarely seriously hurt the tree.

Using and Designing with Witch Hazel

Planting early spring bulbs (like snowdrops) around the base of witch hazel makes a very pretty picture in early spring. Growing witch hazel where it will be backlit in the afternoon makes a stunning winter scene.

You can use the bark of witch hazel to make your own skin concoctions, although you’ll want to harvest it carefully to avoid harming your plants. Witch hazel extract makes a great addition to toners, facial cleansers, and more.

Now that all the hard work is done, you’ll be able to sit back and enjoy a beautiful display of flowers when the rest of the landscape is cold and gloomy!

Want to learn how to grow another winter blooming plant? Check out this guide to growing camellias. 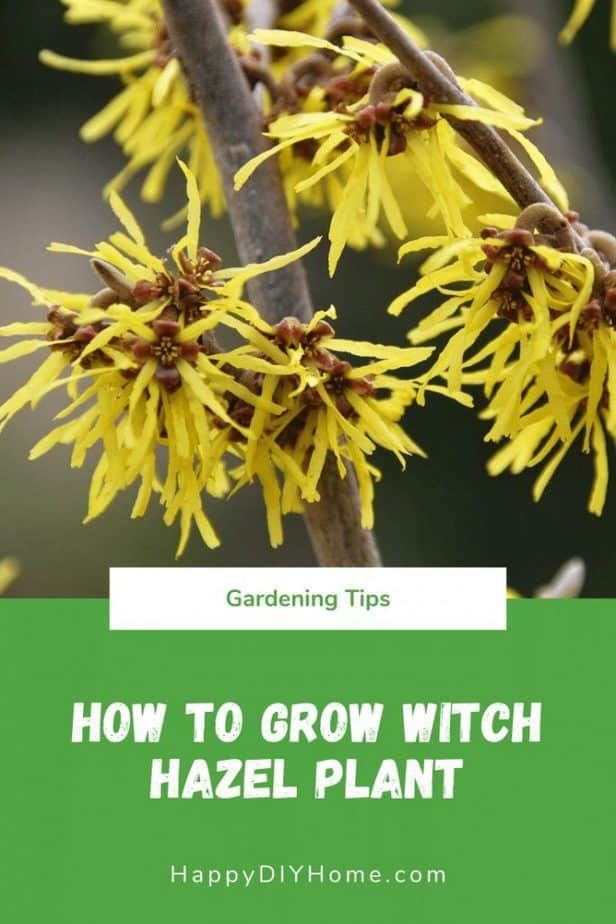