A bee is a bee right? Wrong. There are actually many different types of bee, from the fluffy bumblebee which lives as part of a large colony to the solitary bee. While the honey bee lives in a hive, the carpenter bee prefers to make its home by drilling into wooden objects. Some varieties can sting while others can’t.

Look a little more closely and you will discover a range of brightly colored insects with a myriad of different preferences and habits. In fact there are over 4,000 different bee species just in North America.  Many native species are completely harmless and should be encouraged to visit your garden, for the good of the species and the environment. 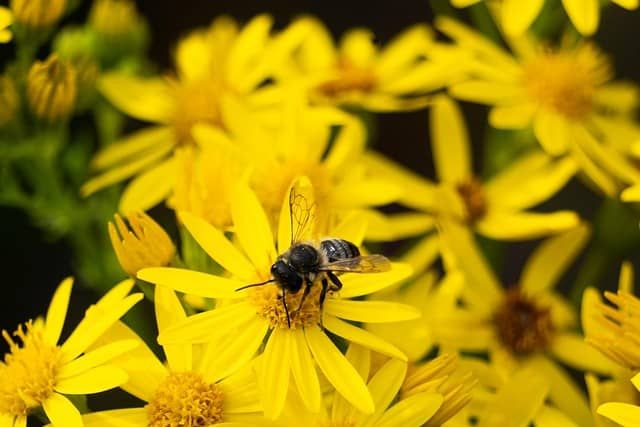 A beneficial insect, why not encourage ground nesting bees to your garden?

As we have already noted there are over 4,000 native bee species in North America. Unlike honeybees, which were introduced to the continent by European settlers in the 17th century, most native species are solitary specimens. Avoiding hives, they prefer to nest in underground chambers. Contrary to popular belief most bee species do not produce honey.

Despite the lack of honey, ground nesting bees play a key role in the ecosystem, helping to pollinate many flowering plants including wildflowers and food crops. The more pollinators that you can encourage to visit your flowering crops, the larger your harvest yield will be. As a native species ground nesting bees are best suited to pollinating native plants such as squash, cranberries, tomatoes and blueberries.

Depending on the species the bee either collects loose pollen on its fur, grooms it into little pollen baskets usually found on their stomachs or legs or they create what are sometimes called pollen pants, covering their legs in pollen. Once secure, the bee takes the harvested pollen back to its chambers to be used as a food source for the larvae. Meanwhile the nectar harvested from plants is a key source of energy for the bee. The female bee sometimes mixes the nectar with pollen to form “loaves”. These are used to lay eggs on.

The vast majority of native species are short lived. Lasting for one season, they have enough time to mate, nest and lay eggs before dying. The following year the eggs hatch and a new bee generation emerges. 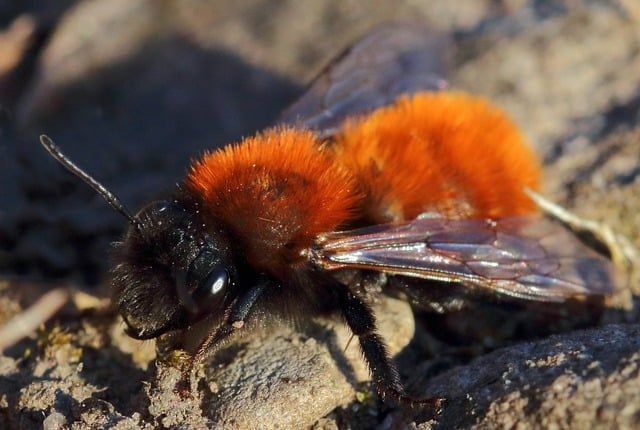 While you may think they are all striped, different bee varieties come in a range of colors.

There are several types of ground nesting bee in the Hymenoptera family. These are all native to North America and include the digging bee from the apidae subfamily as well as:

The majority of ground nesting bees are small or medium in size, usually measuring between one quarter and three quarters of an inch in length. Like other bee species, their appearance can differ slightly between the different species. Some can be hairless while others have hairy abdomens. Some specimens have the typical orange or yellow and black striped body while others have brown, tan, blue or even green bodies. The wings can also vary from brown or black to iridescent wings.

The vast majority of ground nesting bees are non-aggressive. Only the female of the species is able to sting but they rarely do so. Attacking only when provoked or handled roughly. 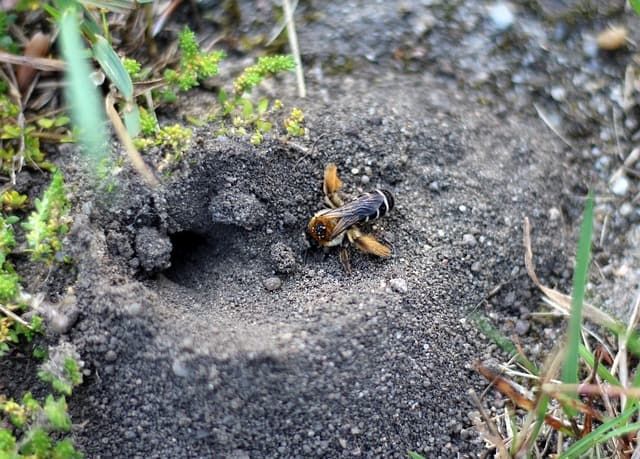 As the name suggests, ground nesting bees make their home in the soil.

Like a number of other native bee species, ground nesting bees are a solitary species. As the name suggests they like to make their nest sites by digging into dry soil. It is the role of the female to find a suitable south-facing site. This is often in a bare patch of soil or lawn. She then burrows down into the ground, making an entrance and a number of brood tunnels.

As the female bee digs down into the soil she mounds the freshly dug earth back around the entrance to the nest. This makes the nests easy to identify. Look out for small, conical mounds of dirt with a circular entrance measuring a quarter to half an inch wide. The small entrance way allows only one solitary bee to enter and exit at a time.

The nursery is then stocked with pollen, ready for the hatching of the next generation of ground nesting bees. Some plasterer bee species even line the nest with a cellophane-like secretion. This waterproofs the chamber, keeping eggs safe and preventing fungal disease from developing.

Despite being a solitary species, many ground nesting bees like to build their nests close to family members. So don’t be surprised if you notice a number of nests in a bare patch of earth.

As we have already noted, despite all the effort put into creating their nests, these are short lived species. They mate, nest and lay eggs. This process lasts for 6 to 8 weeks. The ground nesting bees then die. Meanwhile, the late season eggs develop in the safety of the underground nurseries before emerging the next spring.

Bumblebees and Carpenter Bees are often mistakenly confused with the ground nesting bee.

Members of the Apidae family, bumblebees belong to the Bombus genus. There are around 50 different species native to North America. Larger than ground nesting bees, they range in size from three quarter inches to one and a half inches long. The typical bee in appearance, they are black with orange, yellow or white stripes.

A social species, bumblebees live in colonies consisting of a single queen and several types of worker bee, including sterile females and male drones. Like ground nesting bees, male drones can’t sting. Females and queens can sting, but only do so to defend the nest. Typically the queen bee only stings another queen.

Making their homes at soil level, bumblebees don’t tend to dig their own chamber. They prefer to inhabit an already existing, empty cavity such as an abandoned burrow. If a suitable abandoned chamber can’t be found they instead create a new nest on the top of the soil, loosely covering it with thatch and pieces of vegetative debris such as grass clippings, bark and pieces of tree stumps.

In the chosen site the queen builds wax pots that are topped up with honey. This sustains her while she tends to the eggs. A larger pot is also constructed, this contains a mix of nectar and pollen. On top of this mix the first brood is laid.

The initial brood hatches to produce sterile female workers. Following this, the queen continues to lay eggs while the worker bee maintains the nest and collects pollen. Like ground nesting bees, the vast majority of the colony die off at the end of summer. The only survivors are the next generation of queen bee. They have to find a new mate and shelter before winter arrives.

The carpenter bee belongs to the Xylocopa genus. Seven species are native to North America. Often confused for ground nesting bees, carpenters are half an inch to an inch long and typically have black wings and black and yellow or orange striped bodies. The males also have a small white patch on their face. Some carpenters can have iridescent wings and green or blue bodies. They are often confused with large bumblebees.

A docile species, males don’t sting but do hover near intruders. Females only sting when provoked or roughly handled.

Carpenters are a solitary species. The females of the species construct the nest as well as collecting all the pollen and nectar to feed the eggs. They like to nest in old bare wood such as dead trees, fascias and decks. Once a suitable site is found, the female makes an entrance hole before drilling a series of connecting chambers or galleries. In each gallery an egg is laid on top of a pollen and nectar loaf.

Ground nesting bees have a number of natural predators. These keep population numbers under control.

Insects such as crab spiders, dragonflies and wasps also hunt the bee.

Finally, rodents and mammals such as foxes, minks, shreqs, weasels, bears and skunks are all known to eat both flying adults and entire nests.

How to Encourage Ground Nesting Bees

There are a number of ways to encourage ground nesting bees to your garden.

The best way is to provide a ready made home for them. A deep plant pot or box or wooden frame is ideal. Just make sure that it is strong enough to withstand the wind and rain. Put it at soil level in a quiet corner of your garden. Tilt the pot slightly so that water can run off its surface.

Now that you’ve provided a potential home you need to prepare the nest material. Top soil, gravel and sand can be mixed to make the perfect substrate. To do this, make a mixture that is two parts sand, one part gravel and half a part top-soil.

Fill the pot with the substrate, continuing to mix the material together as you do so. Pour warm water into a Plastic Spray Bottle and gently spray the surface of the nest material. As you spray, press the substrate down, you can use a tile or another flat, hard object to help with this. Pressing the substrate compacts it. Continue this process until the pot is full. You may need to add a few more layers a couple of days after first filling as it all settles.

Once the material is settled, take a screwdriver or a pencil and make a series of holes in the material. These should range in diameter from 8 to 13 mm or 0.3 to 0.5 inches. Waiting for a few days before the substrate settles means that it won’t crumble when you make the holes. If it does start to crumble add some more water and pat the sand down to compact it. Space the holes roughly 0.7 inches apart. If you are using a pencil to make the holes, push it down as far as possible.

Finally, add flowers around your artificial house. This encourages the ground nesting bees to visit. Creating your own bee garden not only benefits your local pollinators but also adds color to your own garden. Popular plants that attract bees include:

Fruit trees are also a great way to draw pollinators to the garden. If you want to add some fruit trees to your space, this is a great guide. 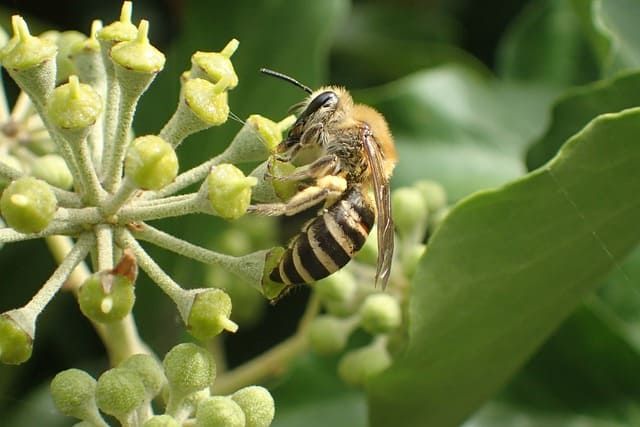 Encourage pollinators, and pollination, by planting a range of friendly flowers.

Building a pond or a bug hotel are also great ways to draw lots of different beneficial insects to the garden.

Native to North America, ground nesting bees are one of the best pollinators that you can attract to your garden. Relatively harmless, they rarely attack, and while they may not provide you with honey, they will pollinate all your plants, encouraging more flowers and fruit to form. 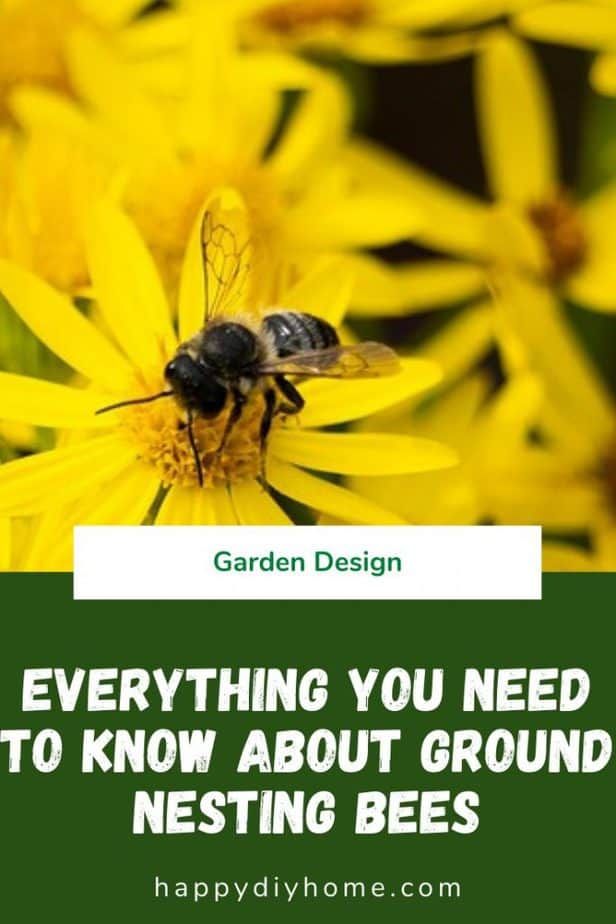 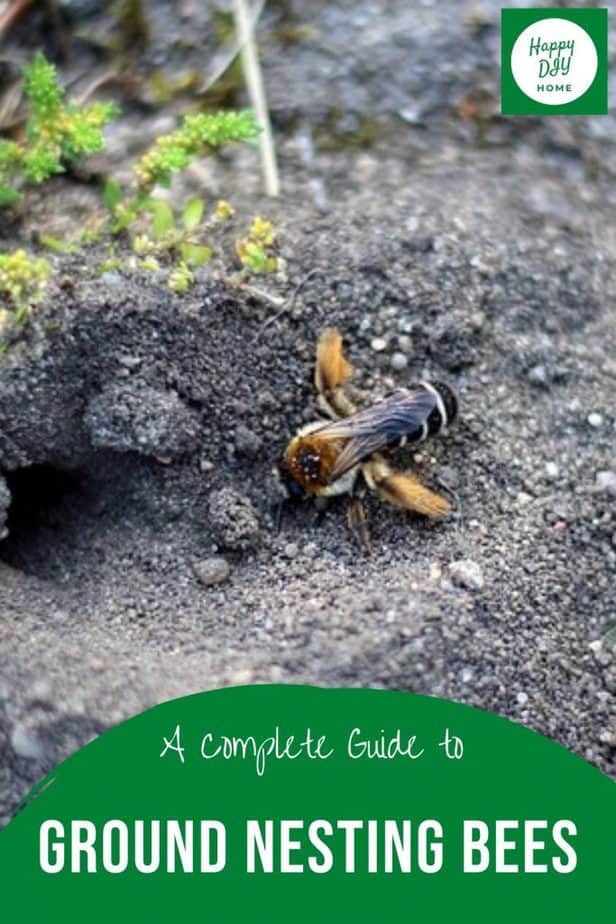