Peppers can be considered a staple vegetable both in the garden and in the kitchen. Whether you like sweet peppers, green peppers, or hot peppers, there is almost an endless variety to choose from.

Not only are they a healthy and colorful snack, peppers are also filled with flavor and easy to grow in areas with hot summers.

Even better, they’re one of the easiest veggies for seed saving (to collect and save seeds from), which will give you a whole new (and free) crop next season. Here’s a seed saving guide that will show you how to save pepper seeds the right way.

Why Save Pepper Seeds?

Saving seeds is not only an act of sustainability. It also gives us a closer connection with the plants that grow our food and is an education all in itself about how plants work.

Peppers, however, are one of the easiest plants and vegetables to save seed from. Other good choices for your first seed-saving attempt include tomatoes, eggplant, beans, and peas. 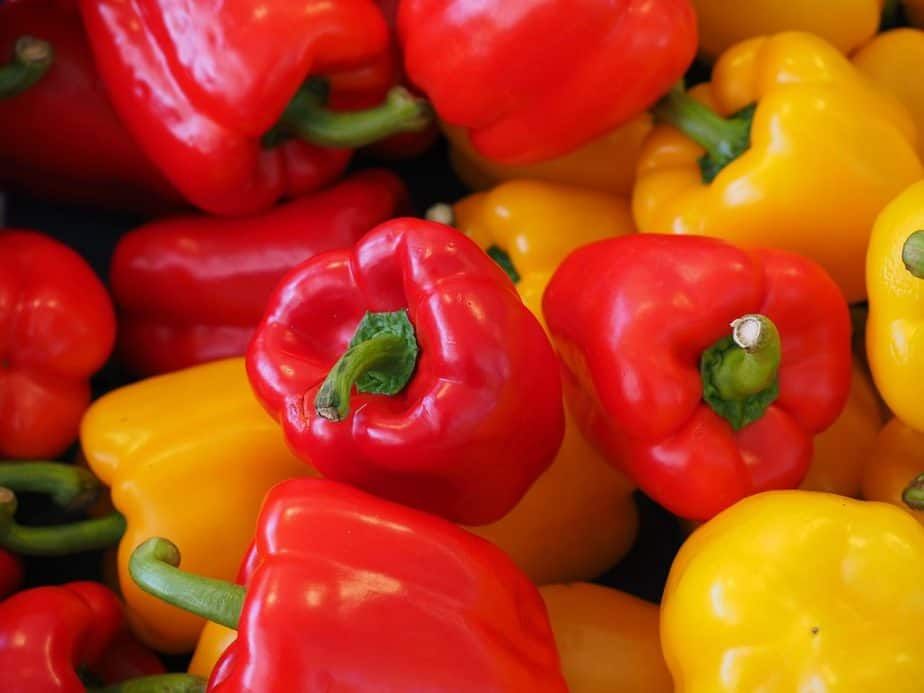 Peppers are one of the easiest plants to collect and save seeds from. There’s an almost endless variety of peppers to choose from and by seed saving, seeds give you a free way to grow new plants.

Saving seeds is also an easy way to keep growing your favorite varieties, and there’s a sense of pride in doing it yourself. It gives you a virtually free way of continuing to grow peppers in your garden for years to come.

While the actual steps for saving seeds from peppers are pretty easy, there are some important terms you need to know and planning steps to take before even planting your crop for this year.

One general rule of seed saving is to not save seeds from hybrids. A hybrid is the result of cross-pollination between two different varieties.

This can happen naturally, but it also happens when humans deliberately cross two strains to come up with a “better” plant that has characteristics of both parent plants. Many pepper plants and seeds that you buy from the store are hybrid.

While there’s nothing wrong with hybrid plants, they most often won’t come true from seed. So if you save seed from your favorite pepper and plant the seeds next year, you’ll most likely end up with peppers that resemble one of the parent plants and not the hybrid you wanted. It’s not a good idea to save seeds from peppers you’ve bought from the store. You have no idea what variety they are, and many of the varieties sold in stores are hybrids.

To avoid this, you should only start with open-pollinated or heirloom seeds or plants.

Heirloom seeds can be thought of as “original” varieties that have been passed down through many generations. They haven’t been hybridized and have been carefully kept as a pure strain. This means they will grow true from seed.

Open-pollinated means that the plants the seeds came from were pollinated naturally (by birds, insects, etc.). They weren’t deliberately cross-pollinated by humans and aren’t hybrids.

This type of peppers is likely to come true from seed, but there will be a little more variation than with heirlooms that have been carefully preserved.

How Do You Know?

If this is starting to sound complicated, don’t worry! All plants or seeds that you buy should be clearly labeled.

Hybrid plants or seeds usually have the label “F1” in their name to designate them as a hybrid. Heirlooms are often clearly labeled as such because many gardeners specifically look for heirloom varieties to grow.

Keep in mind that many open-pollinated seeds are also heirloom, so it’s not uncommon to have them labeled as both.

Choosing your variety is what you need to do when selecting plants at the beginning of the growing season. These are the seeds you’re going to start or the seedlings you’re going to plant that will be harvested in the fall so you can save seeds for next year. 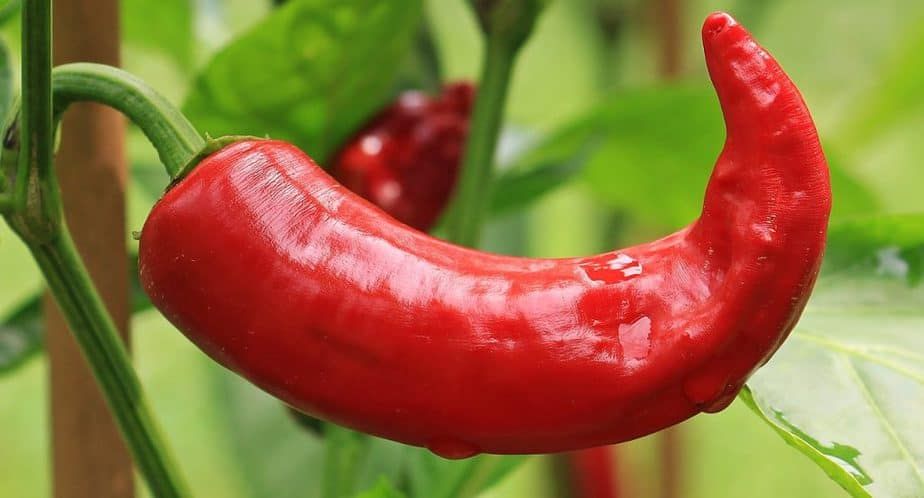 When you buy your pepper plants or seeds, it should be clear from the label whether they are hybrid, heirloom, or open-pollinated. If not, ask the manager of the nursery or seed company you’re buying from or look up the name of the pepper on Google.

This is also why you don’t want to try saving seeds from a store-bought pepper. You would have no idea what type of pepper it is and whether it’s a hybrid or not.

When it comes to collecting pepper seeds to save, you only want to collect from vigorous plants with healthy fruit. This means growing happy and productive plants to begin with.

Although they can be grown as perennials in more tropical climates, peppers are typically grown as an annual crop. Here are some tips for growing and caring for your pepper plants: 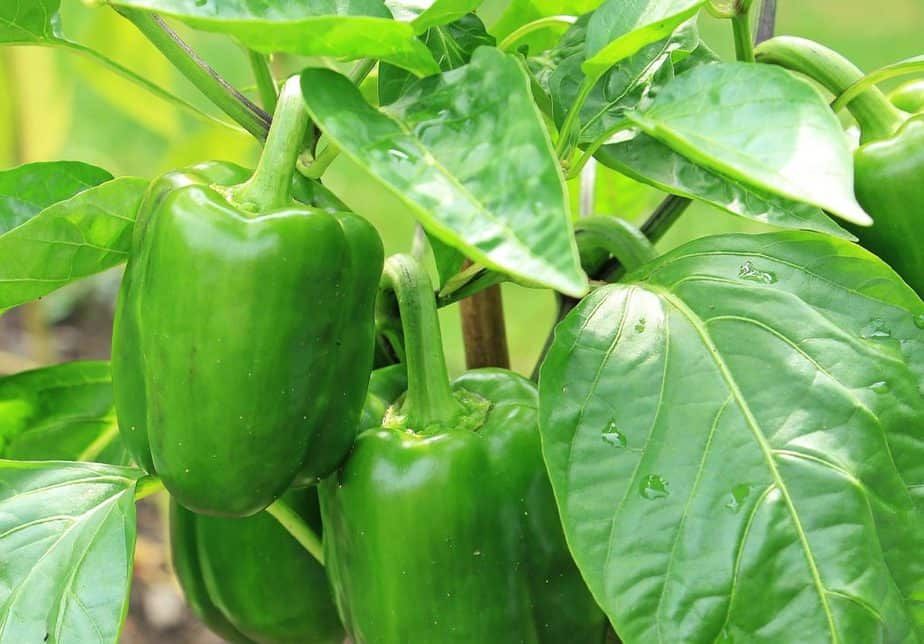 Peppers like lots of sun and heat and will appreciate compost or fertilizer added to the soil. Growing healthy plants is essential to saving healthy, viable seeds.

One of the reasons peppers make a good vegetable to save seeds from is because they are a self-pollinating plant.

Certain plants- like melons and squash, for example- have separate male and female flowers. The pollen needs to be taken from the male flowers to the female flowers in order for fruit to start forming. When pollen from one variety gets taken to another variety, this is known as cross-pollination.

On the other hand, plants like tomatoes and peppers don’t have separate male and female flowers. The flowers self-pollinate and don’t need the aid of pollinators like insects to develop fruit.

However, peppers can still be cross-pollinated if a bee climbs in the flowers of one variety of pepper and then goes to visit the flowers of another variety. If this happens, you’ll end up with a cross of the two varieties when you harvest the seeds instead of the original pepper you want. 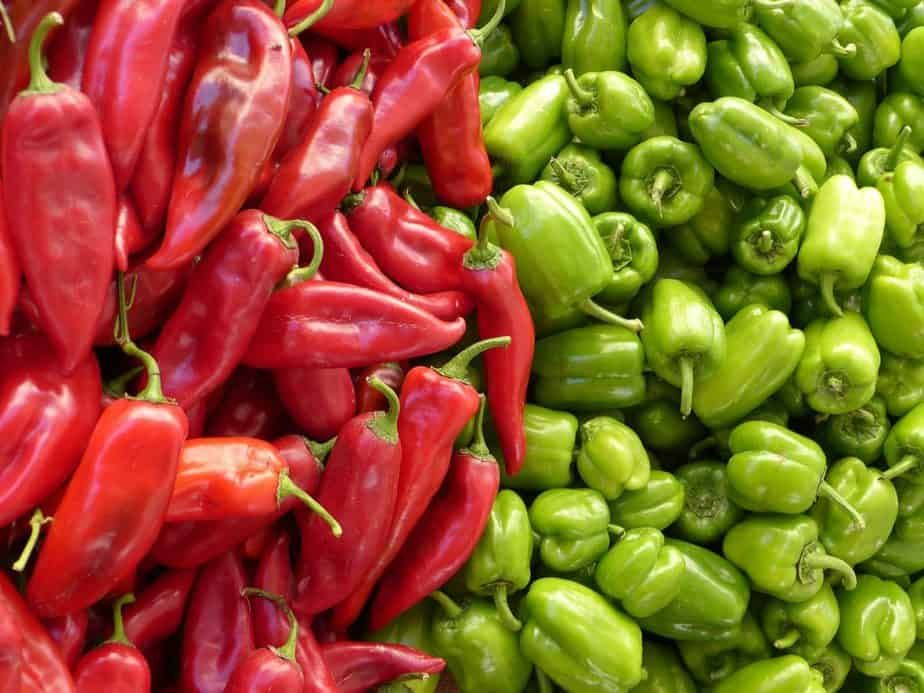 So if you have hot and sweet peppers growing together, you might save the seeds from your sweet pepper plant and end up with hot peppers next year by accident.

To prevent this from happening, gardeners use isolation methods to make sure there is no cross-pollination. There are a few ways to easily do this in your garden:

If you’re a home gardener who plants several varieties each year, isolating by using blossom-bags is probably your best option. It’s easier than trying to measure and separate plants, and it only takes 1-2 peppers to get a good harvest of seeds to save.

Peppers can be harvested at any time for fresh eating. You can harvest bell peppers while they’re still green or wait until they ripen and get sweeter. Most hot peppers should be harvested when fully ripe. 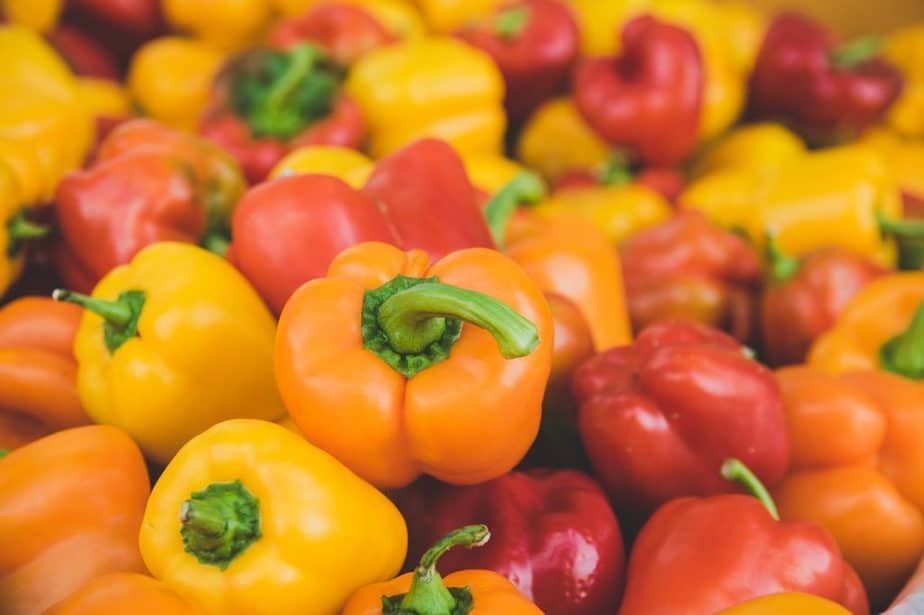 To save seeds, allow all of your peppers to fully ripen and color before harvesting. This allows the seeds to fully mature so that they will be viable.

For seed saving, all types of peppers should be allowed to fully ripen on the plant before being harvested. You can allow them to wrinkle slightly before picking them to be sure they’re completely ripe.

Select only peppers that look healthy and pest-free. Don’t harvest any from plants that look like they are diseased or unhealthy.

Harvest your chosen peppers with a pair of garden pruners by cutting them off cleanly at the end of their stems. If a frost is coming that will destroy your crop before it’s ripe, you can take out the whole plant and hang it in a cool, dry place until the fruit finishes ripening.

How to Save Pepper Seeds

Once you’ve harvested your peppers, take them into your kitchen or a chosen work space and use a clean knife to cut them open and take out the seeds.

This is best done by cutting around the stem and twisting out the core. You can then use your knife to scrape off the seeds.

Be sure that you keep seeds from different varieties separate and clearly labeled throughout the whole process. If you are working with hot peppers, it’s a good idea to wear gloves and avoid touching your face, especially your eyes.

Once you have the seeds out, rinse them gently to remove any leftover pulp. Then, lay them out to dry on a coffee filter, newspaper, or paper towel. Let them keep drying in a warm and dry spot with good ventilation and out of direct sunlight.

The seeds will need about a week to fully dry out. Check them every day or two and turn them over once or twice to make sure the bottom side is drying.

Test your seeds by taking one and breaking it in half. If it’s brittle and snaps cleanly in half, your seeds are fully dried and ready to be stored. You can then remove the seeds.

How to Store Seeds

Pepper seeds will remain viable for 2-4 years if you store seeds properly, although you can expect the germination rate to go down the longer they are in storage.

After you remove the seeds, your seeds need to be stored in a cool and dry place and kept out of sunlight. You can put them in paper packets, sealable plastic bags, or airtight glass containers. Paper packets are convenient for storing and labeling different varieties and can then be placed in one large container. 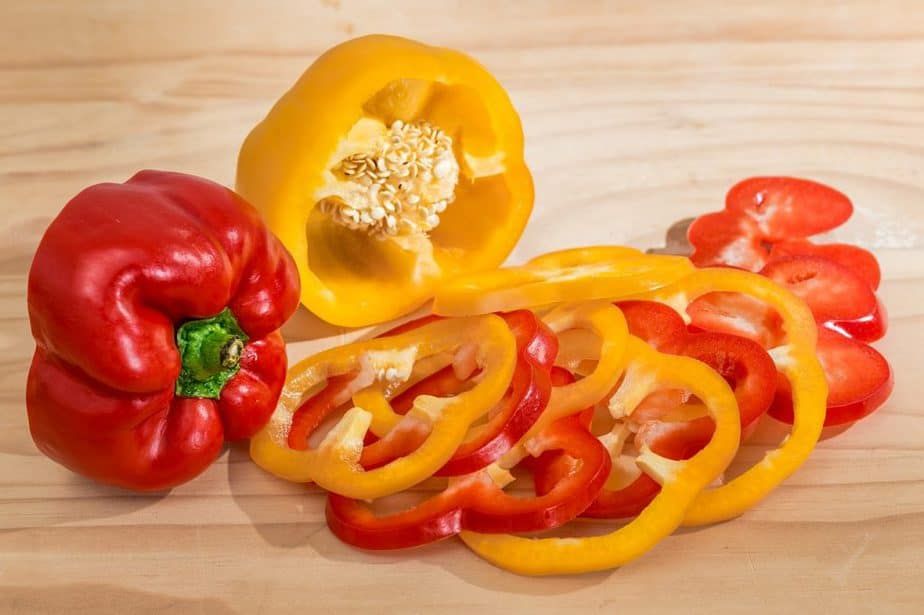 Just one pepper will contain a large amount of seeds. When stored correctly, the seeds will be good for 2-4 years.

As long as containers are airtight, storing your seeds in a cool location like your basement is a good choice. Some gardeners will also refrigerate seeds at temperatures between 35-45°F.

If moisture is a problem, you can add a desiccant to your containers. Silica gel is a popular choice and is available at craft stores. You can also use 1-2 tablespoons of powdered milk wrapped in a tissue or muslin bag.

By following these steps, you will have successfully saved your pepper seeds and will be able to start next year’s crop from seeds you harvested yourself!

And now that you know how to save pepper seeds, why not also learn how to store garlic? You can use it for cooking all winter (along with your peppers) and replant it for a new harvest next year. 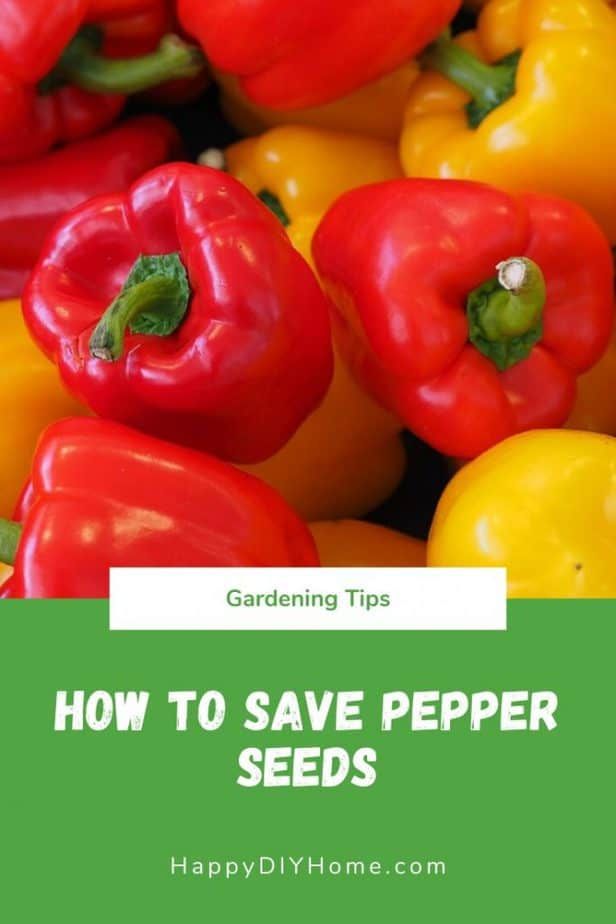