The sago palm (Cycas revoluta) is prehistoric. It has been around since the dinosaurs.  Despite the name they are not true palms but are cycads.  The main difference between cycads and palms is that cycads do not flower and palm trees flower or produce fruit.  Sago palm (Cycas revoluta) are slow growers.  The sago palm plant will grow about a foot every ten years.  A mature sago palm will grow to around 10 to 12 feet tall and take about 50 to 60 years.

Not Really A Palm

The leaves, called fronds, on a sago palm plant usually span about as wide as the sago palm is tall.  Some of mine have grown more and some less depending on the amount of sun and water it receives.  I love how I have many of the same sago palm plants but each one has different and unique qualities. 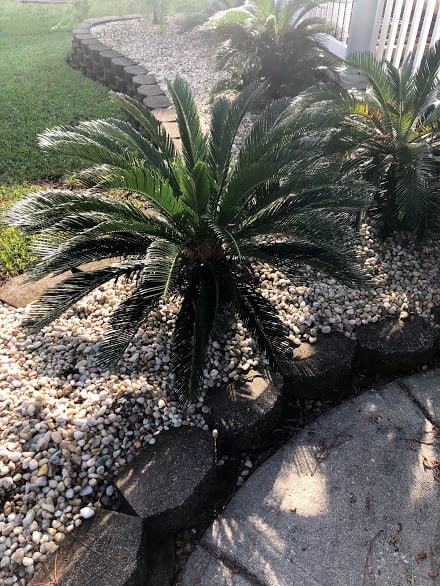 This sago palm is ten years old.  It is one of our slower growers. 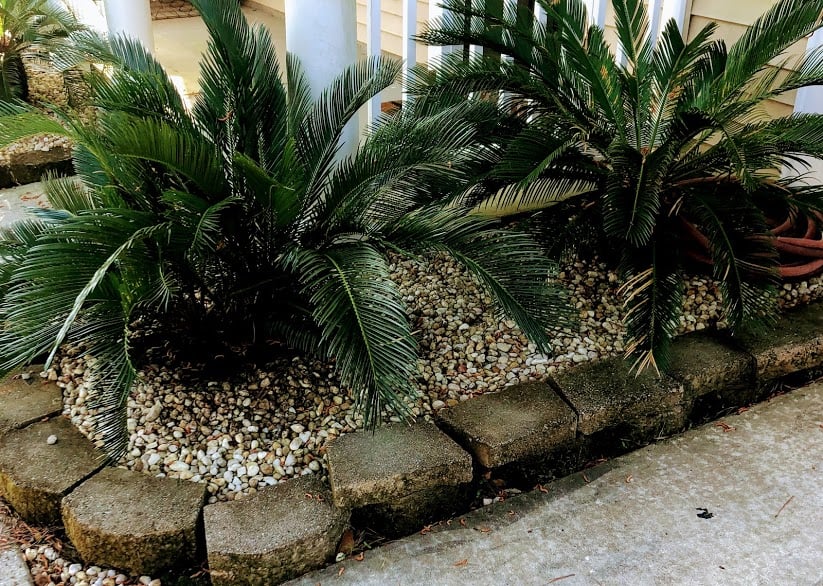 This is actually two connected sago palms that were pups and thankfully came up very quickly after the temperatures rose in the spring.  The original sago palm in this spot died during the freeze.

We did learn that the sago palm is a survivor. We thought that two of our sago palms did not make the storm. The plants did die, but there were pups that survived because new sago palms sprouted up underneath the dead soggy plant.  I had to remove the dead plants. When the base is spongy in appearance and looks waterlogged, you know your sago palm did not survive. The sago palm plants do not like to be continually wet. They need a good system of drainage. Since the snow lasted for 10 days it kept the sago palm too wet.  The bigger sago palms had a larger base or trunk and survived.

Sago palms have pups.  A pup is what you call the offshoots of the sago palm.

They can pop up very quickly once the weather warms up. I prefer to remove the pups from the sago palm because I like the way it looks.  I also wanted my sago palms to grow up rather than wide. This is a personal preference. It does not hurt or help the sago palm plants to leave the pups. 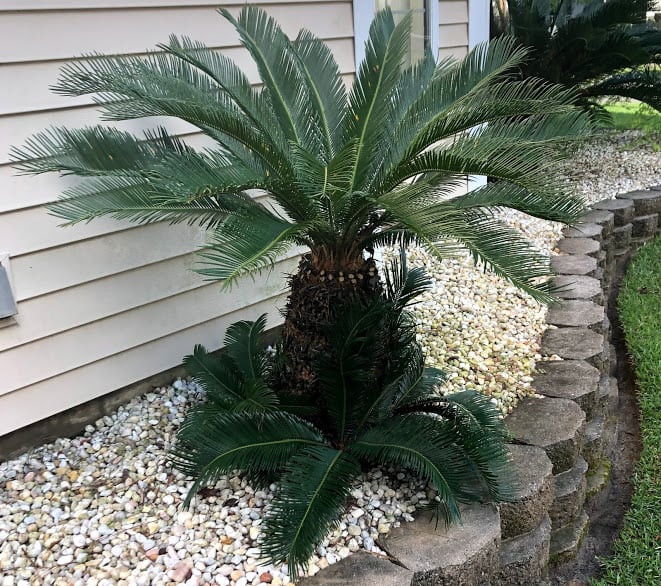 This sago palm has several pups growing out at the bottom.

If you decide to remove the pups you need to dig around the pup so that you can keep the roots intact.  You dig about 3-6 inches down. How large the pup determines how long the roots will be. The bigger the pup the longer the roots.  You use a sharp tool to slice the pup from the tree. Sago palms can be male or female and both produce pups. 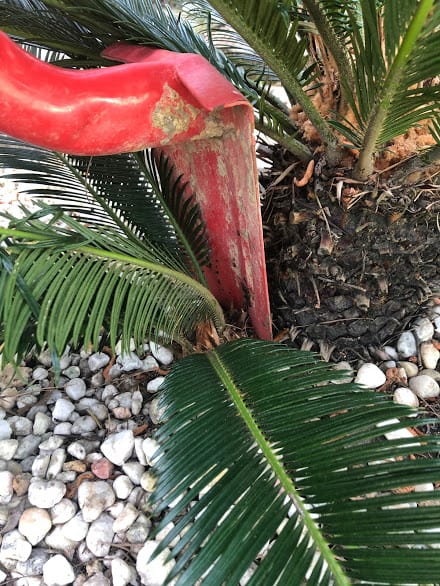 The trencher shovel works the best for me so I can get the tip of the shovel right next to the Sago palm and make a clean slice to remove the pup.

I found after a lot of trial and error that a trencher shovel worked very well. I like this shovel because I am small and can easily use it and use my feet and legs for more leverage and strength.   I can use my foot too angle the trencher shovel correctly to cause the least amount of damage to the original sago palm.

My sago palms have not produced seeds yet.  So I am not sure if they are male or female.  The sago palm is dioecious meaning having the male and female reproductive organs in separate individuals. Males produce a cone-like seed pod and females produce a large round mass with seeds inside.  These structures grow on the very top of the trunk. In order to fertilize the female seeds, there needs to be a male sago palm present.

These are some of the pups that I put in pots.  These are pictured in the sun, but you will want them in a spot with more shade for the first month or two of growing.

You do not have to replant the pups.  You can give them away or put them in a pretty pot and give to your neighbor or child’s teacher as a unique present.  They are good indoor plants if you do not overwater and keep near a window.

When you pot the sago palms you need a  mixture of 50% potting soil, 20% compost manure, 10% peat moss, 10% sand and 10% perlite.  This is a dry mixture because that is what the sago palm likes to live in. You do need to water them well right after you put them in the pots and keep them in an area that gets some sun but not all day sun.  At first, the sago palm pup will need more shade than sun. In about a month the pup will be able to tolerate the full sun. It just needs some time to adjust after the trauma of the removal and transplant.

Fronds grow out of the trunk every year.  Trimming the fronds keeps your plant healthy and aesthetically pleasing.  You need to get right up under the lowest layer of fronds and cut as close as you can get to the trunk.  Every part of the sago palm is strong and rough to the touch. Sago palms are prickly because they have needles all over the plant.  I like to use Corona classic cut pruning shears because they are tough and durable.  I wipe them after each use with a rag and they last for many years. 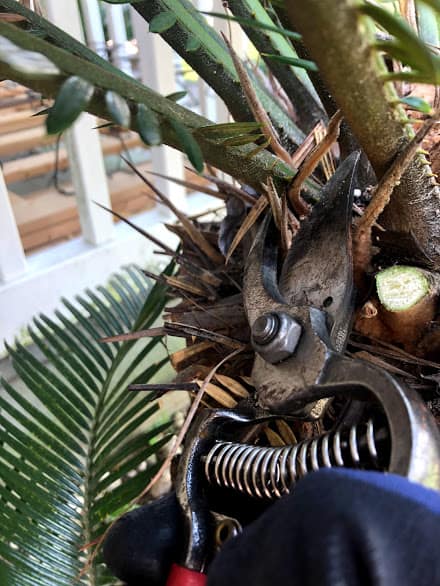 You need to get as close as you can to the trunk of the sago palm plant when pruning the fronds.

When you prune the fronds you need to protect your whole body and take care.  You need to wear pants, a long-sleeved shirt and I wear long gloves that go all the way up my arms.  The sago palm has needles all over the fronds and the trunk.  Every part of the sago palm is rough to the touch. The needles on the plant can puncture the skin and cause irritation.  I have even got a bit of the sago palm needle in my finger, somewhat like a splinter and it made my finger puff up. Once I removed it I felt much better.  Sago palms are poisonous if ingested. 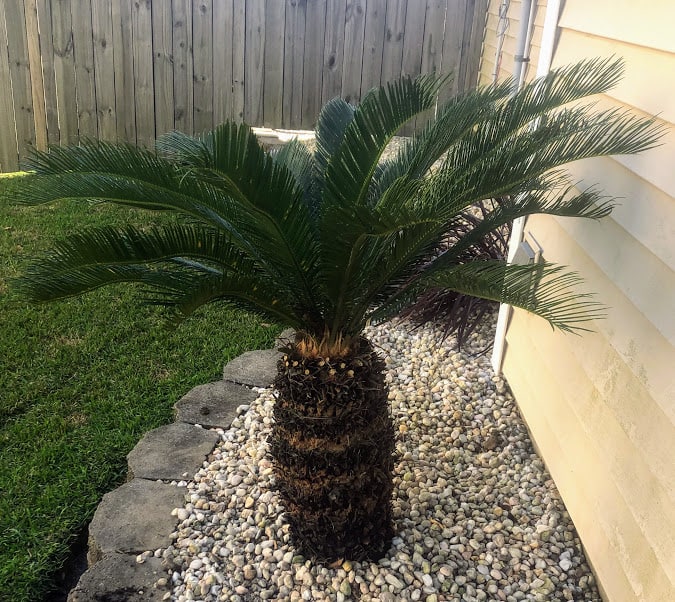 This is a freshly trimmed sago palm all set to thrive and grow more gorgeous for the remainder of the spring and summer!

Sago palm plants do not require a lot of maintenance. I make sure the fronds are trimmed in the early spring.  I also take off the pups in early spring. You need to make sure the weather is going to stay consistent and no low temperatures at night when removing parts from the plant.  They are very hearty but when you do remove parts of the plant it needs good weather and no more trauma due to weather conditions to fully recover and continue to thrive. You do not need to fertilize the soil.  The only time I do add to the soil is when I have removed the pups and there may be a spot where some soil needs to be refilled. I add a small mixture of manure and compost to enrich the soil.