Yarrow is a plant with many uses in the garden. It’s frequently used as a medicinal herb, has great ornamental appeal, and is loved by pollinators.

Though it blooms with delicate-looking flower clusters, yarrow is incredibly hardy and very easy to grow. You can put in an herb garden, native meadow, wildflower garden, or use it as a landscaping plant.

Here’s everything you need to know about growing yarrow, including a complete care guide.

Yarrow (Achillea millefolium) is an herbaceous perennial that many consider a native wildflower. Its original habitat is in the temperate regions of northern Asia and Europe. It was introduced very early in colonial times to North America and has become naturalized in many areas.

Common yarrow has white flowers and grows happily in meadows and prairies. It isn’t a show-stopping plant but has been a staple in herb gardens for centuries because of its medicinal properties.

Over the years, many hybrids and cultivars of yarrow have been developed that are much showier and much more ornamental.

Most varieties can be grown as a perennial in USDA hardiness zones 3-9. They typically bloom from early summer to fall (spring to summer in warmer climates) with an array of yellow, pink, red, white, orange, and gold flowers. 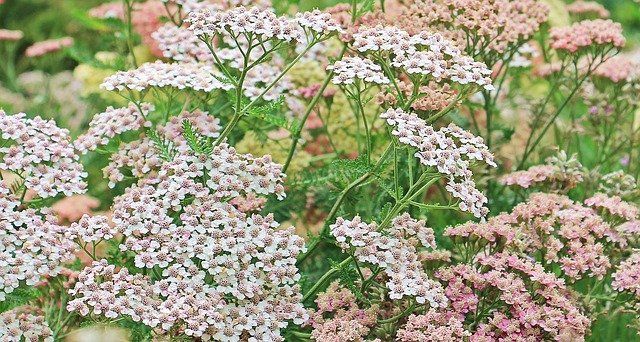 Yarrow is a very versatile plant that fits into almost any garden. The common variety is white with some ornamental appeal, and there are many colorful cultivars that stand out even more.

The foliage of yarrow is also attractive. It is finely cut, feathery and fern-like, and ranges from green to gray-green in color.

Yarrow typically grows 2-3 feet tall and wide, though there are dwarf cultivars and some that grow taller. Most of its height comes from the flower stalks, which are topped by tightly packed flower clusters made up of dozens of tiny florets.

To go with its attractive appearance, yarrow is a virtually care-free plant to grow and perfect for a low maintenance landscape.

It has a lot of versatility with different varieties fitting into perennial borders, naturalized areas, meadows, and more. Some low growing cultivars even make an excellent ground cover.

The flowers are great for cutting and look very attractive in arrangements. They also have a long bloom time and add color to the summer garden. The leaves are aromatic and will release an herbaceous fragrance when crushed.

Another bonus is that deer and rabbits don’t usually find yarrow attractive, so you won’t have to worry about your plants getting eaten.

On the other hand, bees, butterflies, and other pollinators are attracted to yarrow, which makes it a good companion plant for a vegetable garden. 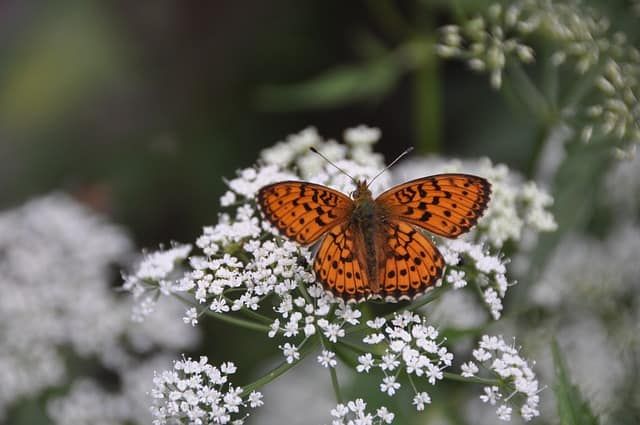 A great plant for a pollinator garden, yarrow attracts butterflies, bees, and even some birds. You can also harvest it and use it as a medicinal plant to stop bleeding and help skin to heal.

Yarrow also has a long history of use as a healing plant. It was once used to stop bleeding and aid wound-healing in battle. This earned it several nicknames like “soldier’s woundwort” and “nosebleed plant.”

If you want to grow yarrow for health purposes, you’ll need to grow the common white variety. The ornamental cultivars don’t contain the same plant compounds that make yarrow medicinal.

A Caution About the Enthusiasm of Yarrow

Though yarrow has many wonderful attributes, its care-free nature makes it an aggressive plant in certain regions.

Plants spread by underground rhizomes. In some areas, this simply means it will spread itself to fill in an empty area. In other areas, the plants may spread too rapidly and crowd other plants out.

The best thing to do is to find out whether yarrow is considered invasive or aggressive in your region. If it is, you may want to consider another plant or be prepared to divide it often to keep it from getting out of control.

There’s a good yarrow plant for almost every garden. Here’s a look at some of the most popular varieties for different uses: 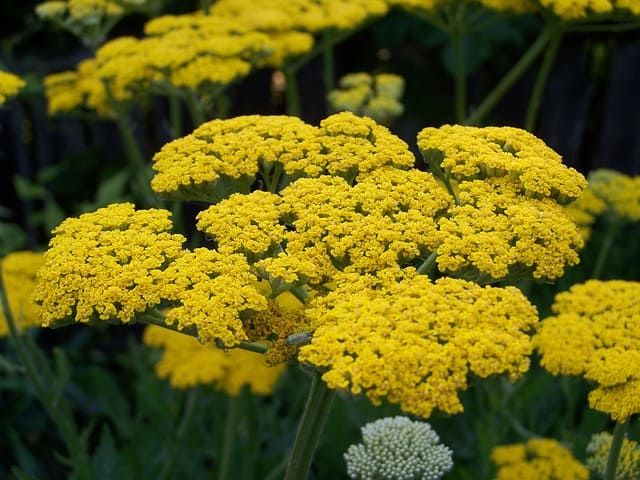 Yellow yarrow varieties like ‘Coronation Gold’ and ‘Little Moonshine’ can really brighten up your garden with their golden or sunshiny yellow color. Pair them with white or other warm colored yarrows.

How to Grow Yarrow from Seed

Yarrow can easily be grown from seed, but there will most likely be some variation in height and color. If you have your heart set on a particular cultivar and want it to look exactly like the picture, buy transplants from a nursery instead of seeds.

On the other hand, mixes like ‘Summer Pastels’ are best started from seed because this will give you the most varied color range.

To start a yarrow plant indoors, you can sow your seeds 8-10 weeks before your last average frost date in the spring.

Start by mixing your seed starting soil with water until it’s damp and just clumps together when squeezed. Then, fill your tray to the top with the damp soil mix and level it off.

Yarrow seeds need light to germinate, so they should be sown on top of the soil. Press them gently into the soil so they don’t wash away, but don’t cover them. Water the seeds gently and put plastic covers over the trays if you have them (this helps keep moisture in).

Place the trays somewhere they will get light- either by a window or under grow lights.

At temperatures of around 65-72°F, your seeds should germinate in 10-14 days. In cooler temperatures, it may take them up to 21 days to germinate. 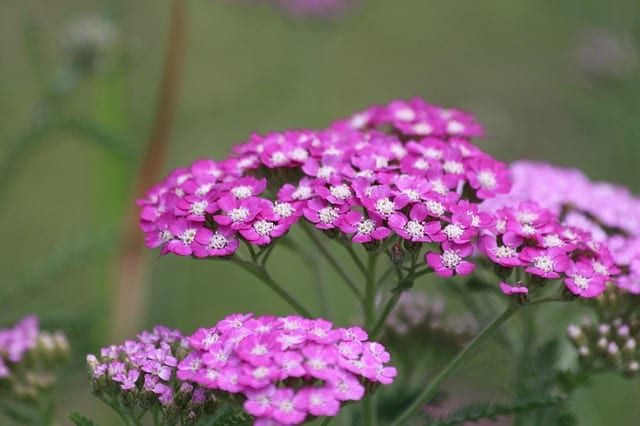 Yarrow is easy to start from seed, but you’ll get more variation in color and height than you would from plants bought at a nursery. Start seeds indoors to get a headstart.

Once the seeds sprout, remove the plastic covers if you have them on, and place the trays under grow lights or by a very sunny window. Water your seedlings consistently as they grow. You’ll want to water them before the soil dries out but not so much that it gets soggy.

A key to keeping healthy seedlings is to avoid getting the leaves wet and give them good airflow. This can come from natural circulation or from a small fan.

After the danger of frost is passed, you can harden off your yarrow seedlings and transplant them to your garden.

Another option for starting yarrow from seed is to sow them directly in your garden. Because it is a perennial, this can be done either in spring or in late fall.

Yarrow seeds sowed directly in the spring will be slower to bloom than those started indoors but should still flower in their first year. You’ll want to put your seeds out after all danger of frost has passed.

In the fall, sow them before the ground freezes but late in the season so they don’t sprout before winter comes.

Before sowing your seeds, prepare your garden bed by weeding and smoothing out the soil surface. You can also add in some compost before planting, but fertilizer isn’t necessary because yarrow will flop over in overly rich soil. 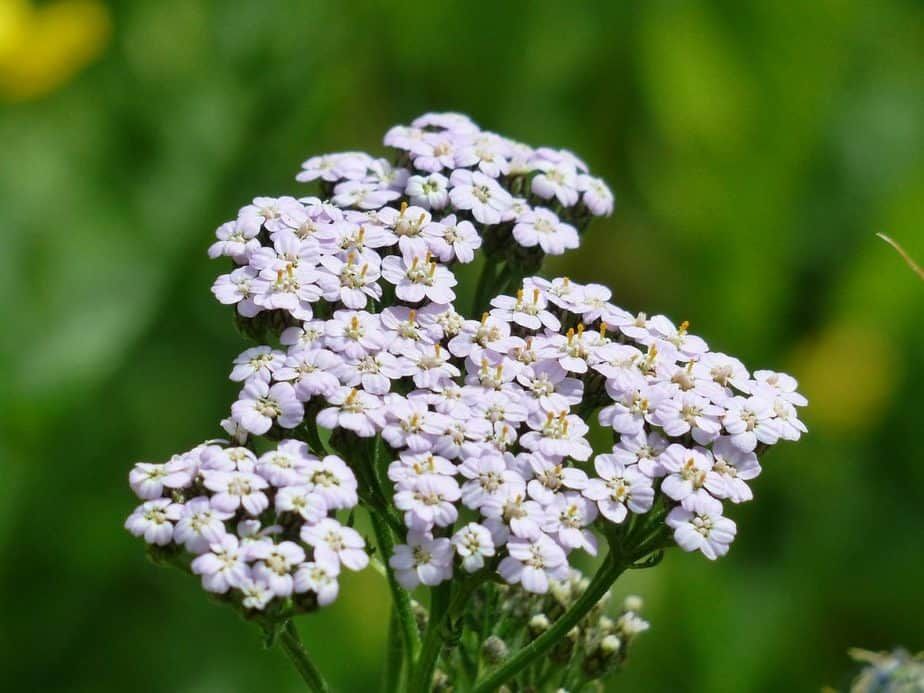 Seeds that are started outdoors will be a little behind plants started indoors, but they should still flower in their first year. You can plant seeds in fall or anytime from spring to early summer.

Once the bed is prepared, sow the yarrow seeds on top of the soil, pressing them gently in.

If you are planting in fall, your work is all done! Nature will take care of the watering for you, and you can look for your seeds to sprout in the spring. Just make sure you mark the spot where your seeds are so you don’t plant anything on top of them.

If you are planting in the spring, water your seeds well after sowing them, and keep the soil from drying out while they germinate. When they get 3-4 inches tall, thin them to a spacing of 12-24 inches, depending on the cultivar.

How to Plant Yarrow

Yarrow seedlings can go into your garden any time from after the last frost in spring to early summer.

Choose a spot that has well-drained soil and gets full sun. Having “wet feet” is one of the few things that yarrow can’t deal with, so be sure to add amendments like compost or create raised beds if your soil doesn’t drain well.

Yarrow doesn’t do well in overly rich soil, so it’s a great choice for areas of your garden that have poor soil. It’s also drought tolerant, so feel free to plant it in a dry spot.

Yarrow should typically be spaced 12-24 inches apart, but the exact spacing depends on which cultivar you’re growing. Dwarf varieties can be planted closer together, but larger varieties should be given plenty of room for good air circulation. 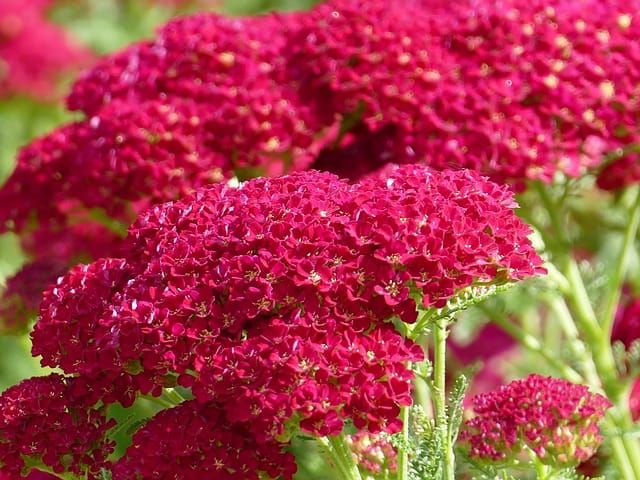 The biggest tip for planting yarrow is to make sure it has well-drained soil and full sun. Soggy soil is one of the biggest reasons for yarrow plants to fail to thrive.

Once you have the spacing figured out, plant your seedlings so that the top of the root ball is just below the soil. Firm in each plant with your hands, and water them well.

Yarrow is a very low maintenance plant, so there are only a few tasks you’ll need to do regularly.

Though drought tolerant once established, your seedlings will need watered regularly until they can get their roots deeper into the soil. Keep them well weeded, especially while they are still small.

Mulch usually isn’t a good idea with yarrow plants because it may keep the soil too wet for them.

Fertilizer also isn’t necessary and can actually cause your plants to grow too aggressively or to flop over. Instead, apply a layer of compost around your yarrow each spring to give it some nutrients.

Deadheading your plants in midsummer when the flowers start to fade is optional but will encourage repeat blooming and keep them blooming for longer. If plants become too tall and start leaning, you can cut them back to the foliage to make them bushier and more compact.

Ideally, you should divide your yarrow plants every 3-5 years. This keeps them healthy and vigorous and also prevents them from spreading. 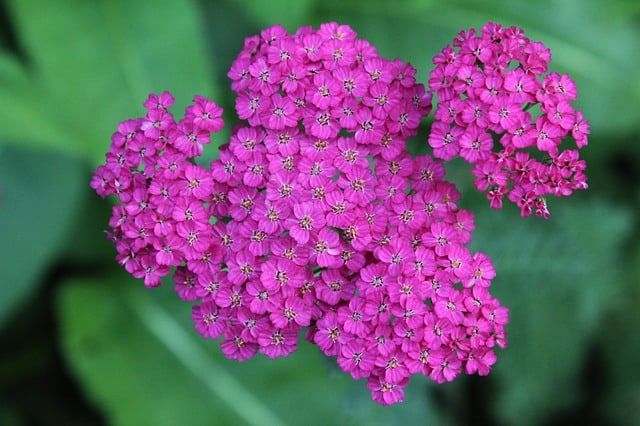 Deadheading will keep your plants flowering for longer, but it’s completely optional. If you notice plants getting too tall and flopping over, it is a good idea to prune them back to the foliage.

To divide plants, simply dig them up in spring or fall and cut through the roots so that you have several smaller sections. Replant them all or give a few away.

Yarrow rarely has pest or disease problems. It is even resistant to larger pests like deer and rabbits.

Occasionally, you may find aphids on your plants. They can be dealt with by spraying them off with a hose or using an organic spray if necessary.

Powdery mildew, stem rot, and mold are fungal pathogens that can affect yarrow if it’s grown in damp conditions. Ensure that the soil drains well and that plants are spaced properly to avoid fungal problems.

If your yarrow plant does not seem to be growing well, the most common problems are overly wet soil and not enough sunlight.

Yarrow has a lot of versatility in the garden. Try it in any of the following ways:

There are also lots of plants that pair well with yarrow, but summer blooming perennials are especially nice. Try it with plants like purple coneflower, lavender, balloon flowers, butterfly weed, or bee balm.

Because there are so many choices for yarrow, you can also combine different varieties in contrasting or complementary color schemes.

Whatever you choose to do, yarrow works well in almost any garden! 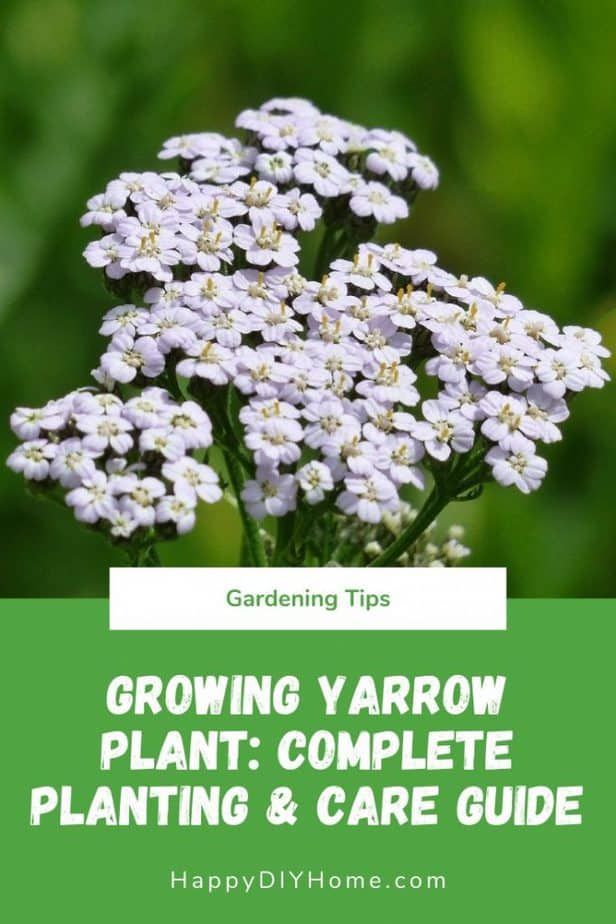