Colorful and attractive, the dragonfly is not only one of the most popular insects but also a common sight near water sources such as ponds, lakes and streams. But did you know that there are many different types of dragonflies?

Also known as the Devil’s Darning Needle or the Devil’s Arrow, the first types of dragonflies emerged over 3000 million years ago. While today they are typically 2 to 5 inches long, fossilized dragonflies have been discovered with a wingspan of up to 2 ft.

The dragonfly can be identified by its long body and transparent wings. Today, there are over 5000 different types of dragonflies. Members of the Odonata order, denoting a flying insect Odonata means “toothed one” in Greek. This article will highlight some of the most interesting. We will also give you some tips to attract all types of dragonflies to your garden. 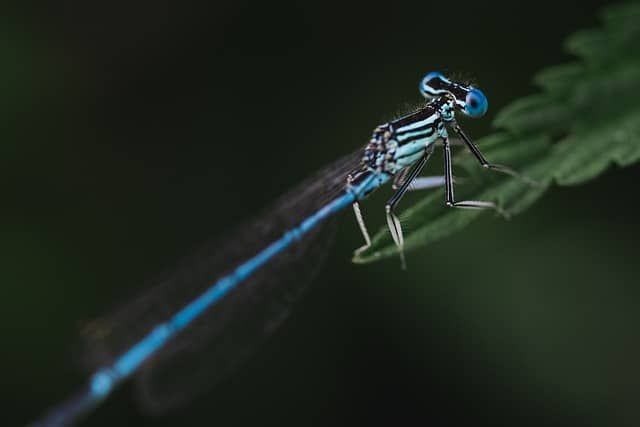 The dragonfly is a colorfully attractive insect.

How We Categorize Different Types of Dragonflies

Despite similar appearances not all types of dragonflies are the same. Most varieties can be placed in one of 3 super families:

Aeshnoidea is the first super-family, it consists of 5 distinct types, one of which the Aktassiidae is sadly extinct.

Also belonging to the Aeshnoidea group are: 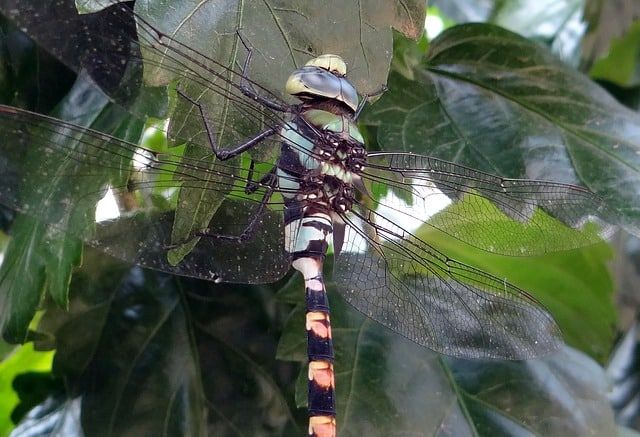 The Common Clubtail is more muted than other, colorful dragonfly insects. 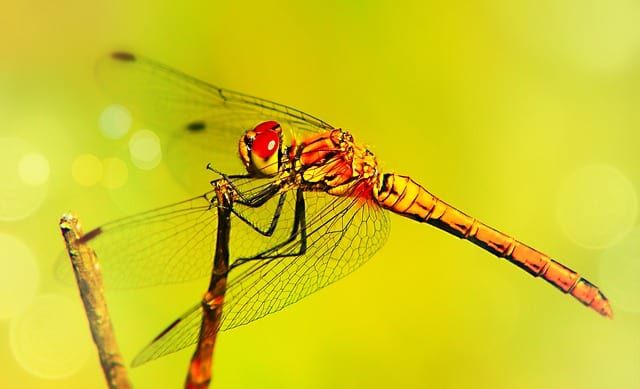 The translucent, unpatterned wings of the dragonfly are clearly seen when the insect is stationary.

This super family consists of 4 types of dragonflies: 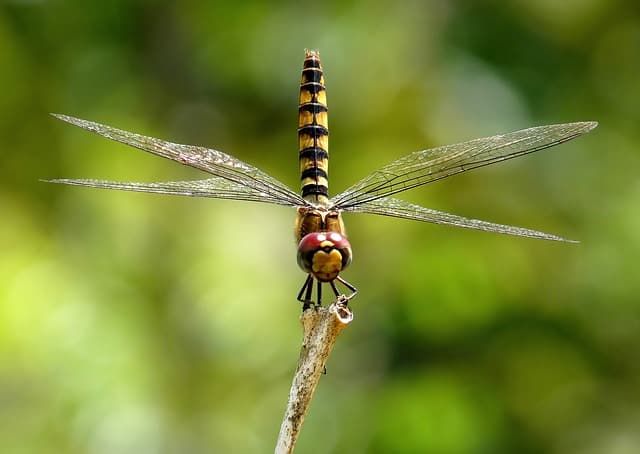 Sometimes a dragonfly can be seen perching in the sun.

Each of the super families explained above contains many different types of dragonflies. These can often look similar in appearance to each other or other subfamilies, making identification difficult.

The following are some of the most commonly seen and easily identifiable types of dragonflies.

A member of the Gomphidae family, Clubtails are commonly seen close to or hovering over water bodies across North America. There are over 100 different species of Clubtails most of which have a club shaped abdomen. This is often more pronounced in males. Sometimes called the Bladetail dragonfly, males are typically black with green markings and yellow spots close to the abdomen while the female is black with yellow markings.

The Skimmer dragonfly is commonly seen in many parts of North America. There are over 100 different recorded species of Skimmers, all of which belong to the Libellulidae family. Also known as Perchers because of their habit of perching on crops or vegetation when it is in sunlight, Skimmers are typically medium sized insects. Depending on the exact species the color can be a dark brown or black, lightning to yellows, greens or blues. 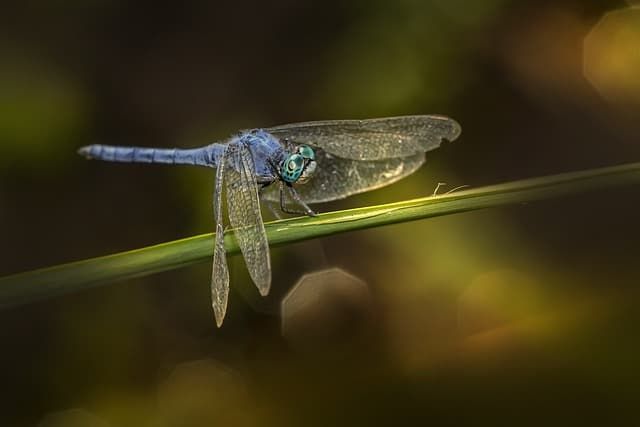 The Southern Skimmer is a medium sized, blue insect.

Capable of cruising long distances along river banks, streams or roads, Cruisers belong to the Macromiidae family. One of the larger types of dragonflies, River Cruisers have long, slender bodies with yellow stripes and bright green eyes. Like clubtails they are a common sight across North America.

A member of the Cordulegastridae family, Spiketails can be identified by their long, large bodies. Further enabling identification, the brown or black abdomen usually has a distinct bright yellow pattern. One of the most active types of dragonflies, Spiketails are rarely seen perching or resting. Spiketails are a common sight in the wooded areas close to the Rocky Mountains.

Members of the Aeshnidae family Hawkers are thought to be one of the fastest types of dragonflies. Common to North America these large insects mate mid flight before laying the eggs closeby, usually in water. While males are typically dark blue with green markings, females are brown with green markings. Interestingly female Hawkers are thought to be capable of faking death to avoid the unwanted advances of unsuitable males. 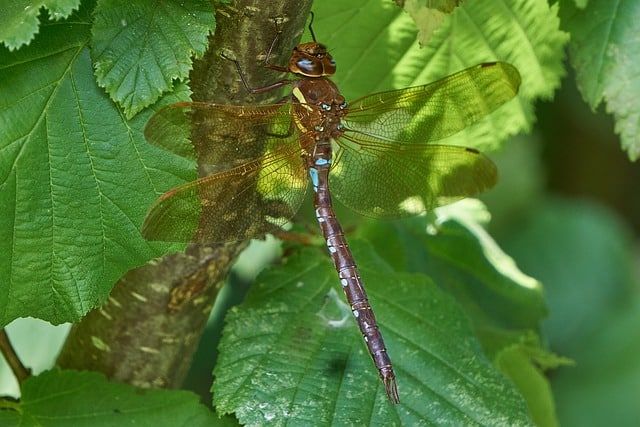 The blue markings of the Hawker are clearly visible.

One of the most distinctive types of dragonflies, the name Petaltail is derived from the insect’s long straight tail, which resembles a petal in shape. Black and gray in color, this unusual coloring makes identification easier. Members of the Petaluridae family there are 11 species, the largest of which is found in Australia. Unlike other types of dragonflies that tend to lay and develop close to water, Petaltail’s prefer fern-filled areas. 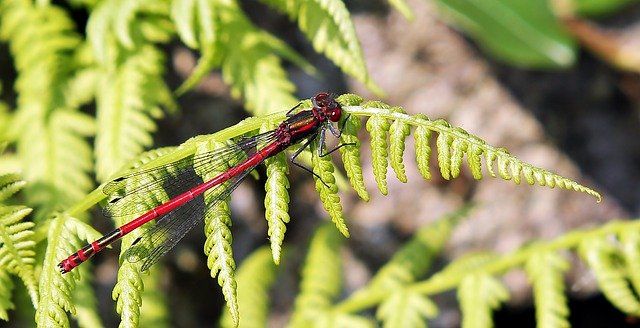 Some types of dragonflies prefer areas rich in ferns.

One of the most prominent members of the Sythemistidae family, the Tigertail looks similar to Corduliidae and Gomphidae types of dragonflies, meaning that they are small in size with slender abdomens. Commonly found in Australia and New Guinea Tigertails like to be close to streams, ponds and slow moving bodies of water. As the name suggests, Tigertails have yellow and black striped markings on their tails.

Like Hawkers, Darners belong to the Aeshnidae dragonfly family. Found near lakes, streams and ponds across the United States most Darners have a black body with blue spots. Typically males have blue dots on the thorax or abdomen while the females have yellow or green spots. 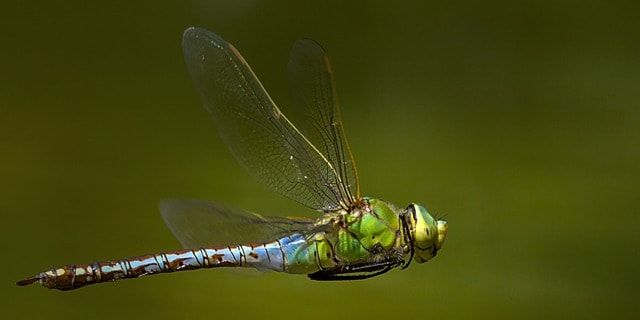 Darners are amongst the most colorful types of dragonflies.

Commonly seen in Mexico, Canada and the United States, Saddlebags belong to the Libellulidae dragonfly family. Also known as Black Saddlebags, these types of dragonflies like to be close to slow moving, fish-free bodies of water. The ideal habitat will also have lots of vegetation closeby. Capable of migrating from the north in the spring to the Atlantic coast in the fall, Saddlebags are sometimes called Dancing Gliders because they conduct a mating dance to both mate and lay eggs. A great natural way to control mosquito populations, depending on the exact species, Saddlebags can be deep red to brown or almost black in color.

While not strictly a dragonfly, Spreadwing Damselflies belong to the same scientific category, Odonata.  Unusually Spreadwings keep their wings spread even when resting. Preferring to be close to still or slow moving water bodies, Spreadwings can perch on crops or vegetation in sunlight while searching for food. A large damselfly, Spreadwing bodies are usually green or metallic bronze. 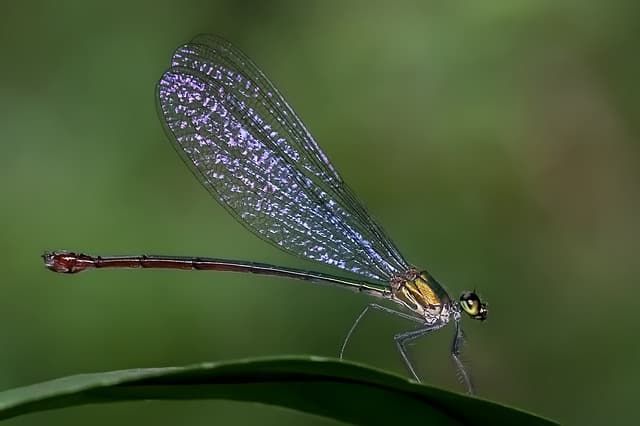 The damselfly belongs to the same scientific class as the dragonfly.

Another large insect, Broadwing Damselflies have bright flashy bodies, often displaying hints of metallic blue or green. Some such as River Jewelwing, which is a particularly attractive insect, can be just as large as many types of dragonflies. River Jewelwing is one of the most prominent and easy to spot members of the Broadwing Damselfly family due to its wide wings.

If you want to attract a dragonfly to your garden the best thing you can do is introduce water. These colorful insects love boggy areas as well as ponds and fountains. Around water, the dragonfly acts mainly as a beneficial insect, keeping pests such as mosquitos to a minimum. Largely harmless to people, many types of dragonflies are capable of eating their own body weight in bugs in around half an hour.

Be careful, while they are visually attractive, not everyone likes these insects. Some dragonfly species can be territorial and may buzz around you or even bite. In some cases this can trigger allergies. However allergies from dragonfly bites are nowhere near as common as those triggered by bee or mosquito bites.

Don’t worry about a visiting dragonfly being predated by larger creatures. These are surprisingly quick flying insects. A healthy dragonfly is capable of avoiding large predators such as birds and frogs.

The female dragonfly typically lays her eggs in wet or muddy areas. Nymphs, dragonfly larvae, usually hatch within 3 weeks. You can also create a breeding area by filling  an old water barrel up with water. With the addition of a few plants, it quickly becomes a safe mating area, as well as a safe place for nymphs to develop.

Interestingly all types of dragonflies are sensitive to air pollution. A large dragonfly population is a sign of good air quality.

The easiest way to attract a dragonfly is to install a pond. Ideally it should be about 20 ft in diameter and at least 2 ft deep. Constructing a pond with shallow, sloping sides allows you to install lots of vegetation such as pond plants. Don’t put fish in your pond. Fish eat dragonfly nymphs. If you want to learn more about constructing your own pond, this is a great guide.

If you don’t want to install a pond, you could plant a rain garden or bog garden. Either of these options will also attract many types of dragonflies. Installing lots of 3 ft stakes 6 ft apart around or in your pond, as well as further back into the garden, gives the visiting dragonfly lots of places to perch. Bamboo Stakes are a sturdy, natural option. You can also spread large rocks around the edge of the pond to provide a low level perch.

In addition to creating a watery area, there are a number of plants that you can plant to encourage a dragonfly to visit your garden.

Submerged vegetation such as Dwarf Sagittaria grows well in USDA Zones 6 to 10. It provides a great shelter for developing nymphs as well as a reliable source of food.

Floating pond plants such as water lilies provide a safe place for a female dragonfly to lay her eggs.

Emergent plants that rise out of water are useful for both dragonfly nymphs and adults. Water horsetail is an ideal plant. Hardy in USDA Zones 4 to 11, the dark green, hollow stems provide an excellent perch for a visiting dragonfly. Other good pond plants include Swamp Milkweed and Wild Celery,

Shoreline plants provide hiding and hunting places for a visiting dragonfly. Marsh plants such as arrowhead and cattail are great choices. For a list of some of the best bog plants, check out our list here.

You can also plant a number of flowers around your pond or water feature. Popular dragonfly flowers include: 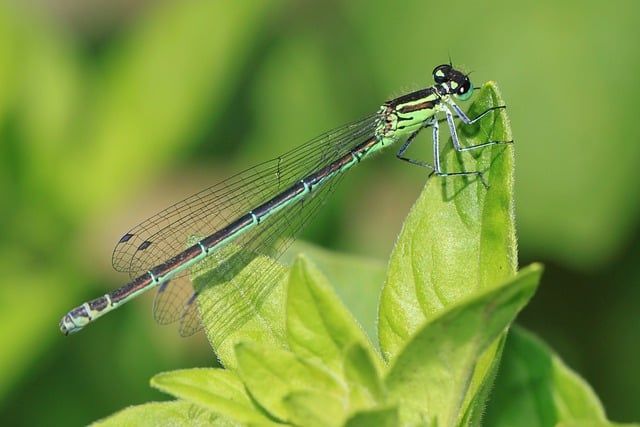 Colorful, elegant and beneficial, the dragonfly is one of the most attractive insects.

Attractive and beneficial, the many types of dragonflies provide interest to a watery area. They are also a useful part of a vibrant, healthy ecosystem. Whether you want to attract them to your garden or simply admire their vibrant colors, there is no doubt that the dragonfly is one of the most attractive insects in the garden. 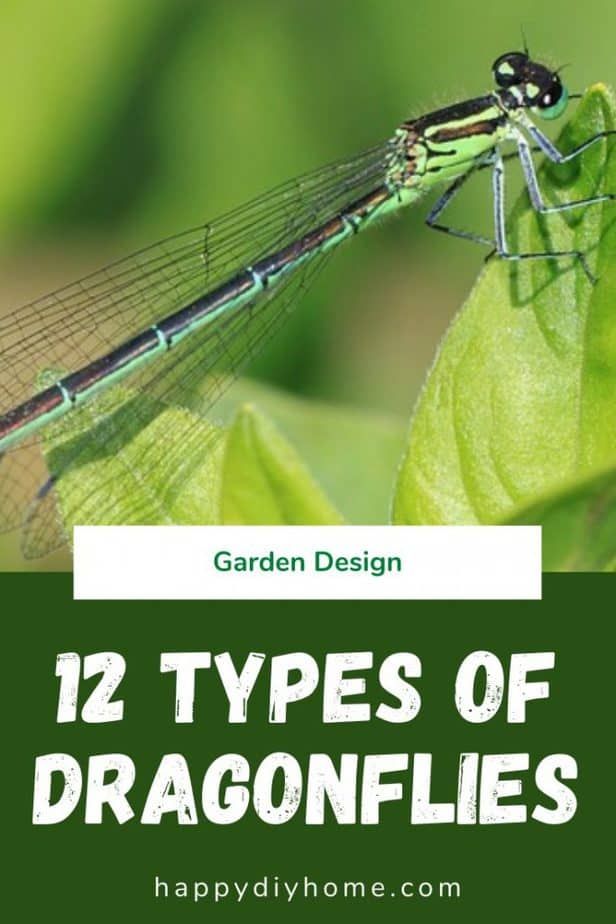 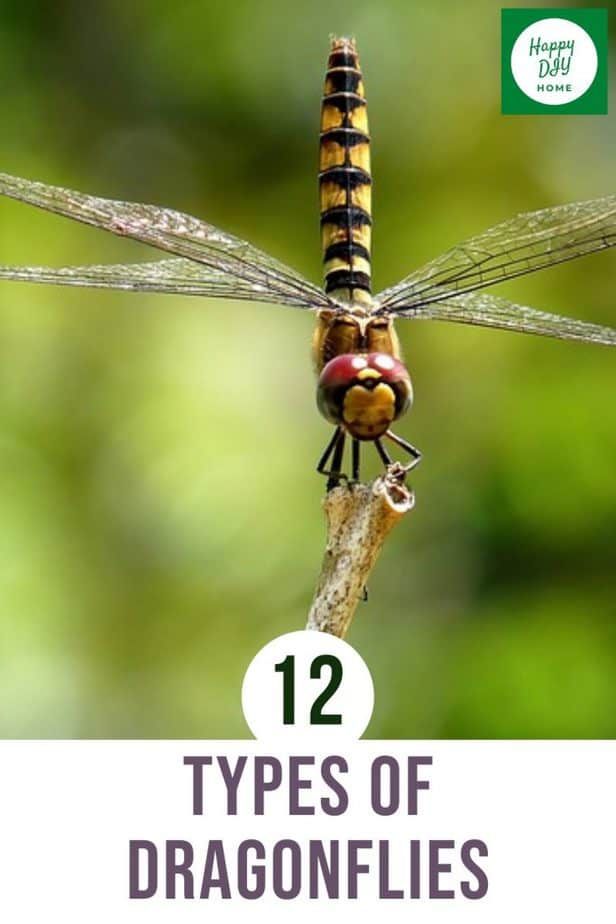