Columbine flowers are a beautiful addition to your outdoor garden. These unique flowers come in various shades, from periwinkle to yellow to orange. Columbines are native to woods and slopes of North America.

They are a hardy wildflower that can survive harsh conditions in the wild, but they can sometimes feel tricky to get started in your backyard. Here, I’ve gathered some helpful information and condensed it into a guide to help you get the most out of your columbines.

There are many varieties of columbine in purples, pinks, and other shades.

I grew up in the Rocky Mountains of Colorado. Columbines were everywhere in the spring or summer, usually in shades of blue and purple. They would line the hillsides and could be spotted at surprising altitudes.

Columbine flowers are also called Aquilegia. There are actually over 60 different species. Many of them attract beautiful garden visitors like butterflies and hummingbirds. They are a splendid choice for a rock garden and are surprisingly easy to care for.

Columbine flowers are perennials, meaning they last several years. The first year, columbines will not flower, but after that, they can provide up to three years of flowers. Columbines are also excellent at self-spread, which is one of the reasons they are such a common wildflower in places like Colorado.

In order to help you grow columbines in your garden, I’ve put together a helpful guide. I’ve broken columbine care into sections, so you can keep track of the important elements that come together to give life to a successful columbine. 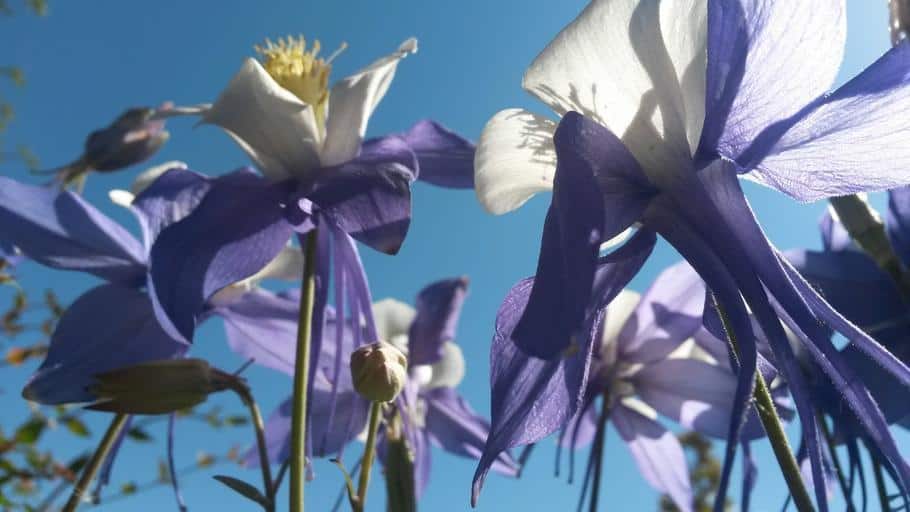 Columbines need some sun, but they’ll wither in too much heat.

Columbines are a high altitude plant that don’t appreciate too much heat. They thrive in partial sun at mild to low temperatures. Direct sun can cause sunburn and wilting, so it’s important to give your columbine some shade.

One of the good things about these perennials is that they don’t need much extra attention in the winter. Though some people choose to cover them with mulch for protection, it usually isn’t necessary to do anything special for your columbines before winter hits.

Come summer, they should revive again on their own as they would on the mountainsides. 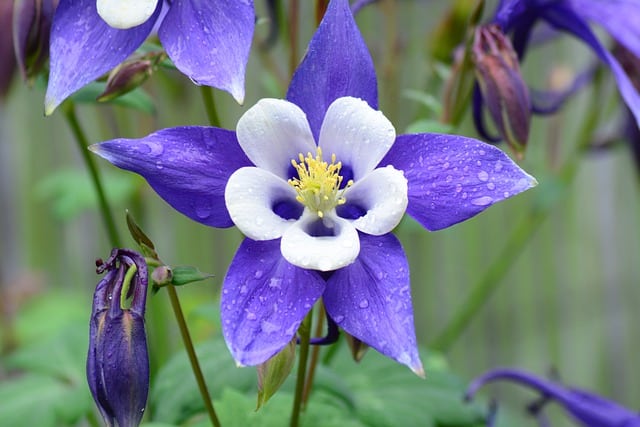 Columbines are drought resistant, making them an easy garden plant.

As I mentioned before, columbines are quite hardy plants and can survive harsh conditions. They are a drought-tolerant plant. Though columbines won’t thrive without regular watering, a forgetful gardener won’t be able to kill them with a week or two of forgetting to water.

When you do water your columbines, it’s important that you have a good drainage system in place. Columbines are easier to overwater than underwater, so it’s important to plant them in well-draining soil where the roots won’t suffer from root rot.

You should water columbines only when the soil is starting to dry from the previous watering. If the soil is still wet, wait a day or two more before watering. However, you shouldn’t let the soil completely dry out between every watering. 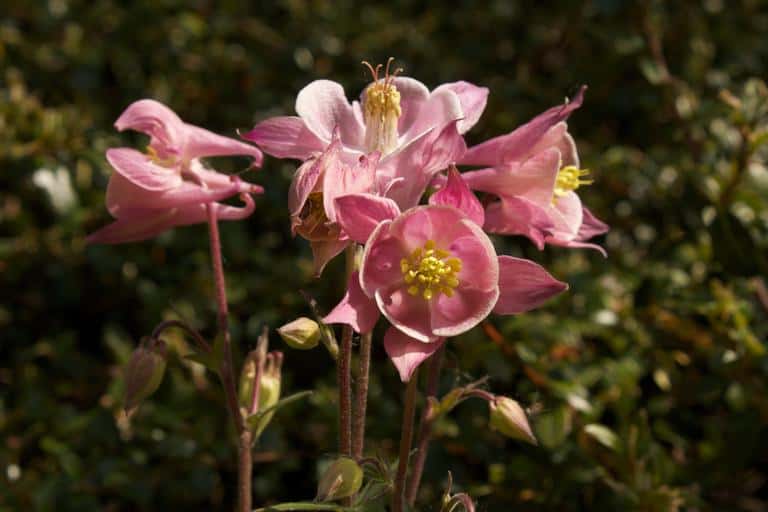 Columbines are a common wildflower that can spring up in fields or on rocky slopes.

Wild columbines can be found on rocky ledges or high altitude plains. Because of this, they aren’t too picky about what kind of soil you use, as long as it has good drainage and you don’t overwater.

However, it’s a good idea to mix soil with compost for the columbines in your garden, since this will help them thrive as they grow.

When planting columbines, it’s easy to start from seeds. Place each seed in a small indent about a foot or two apart. Don’t cover the seeds and water lightly. If you’re moving a potted columbine to your garden, plant each flower about two feet apart and allow a few days for the roots to settle before watering.

Like any plant, there are some problems that can inhibit the growth of your columbine flowers. Here are a few important things to watch for as you care for your garden. 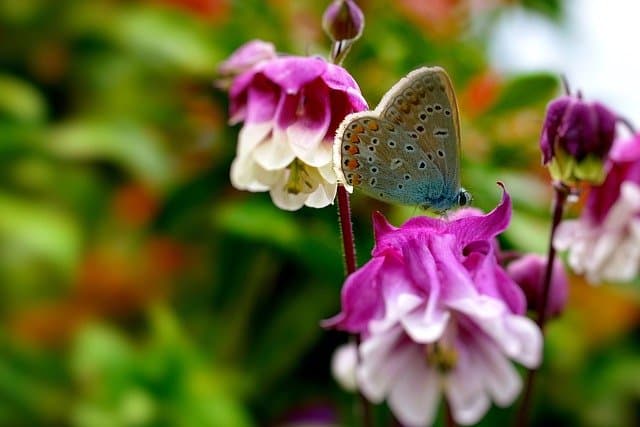 Columbines attract butterflies and hummingbirds, and they aren’t plagued by many pests.

Columbines aren’t susceptible to many pests, but they can attract leaf miners. These bugs won’t destroy a columbine, but they can eat the leaves and make the plant look worn-out and damaged.

If you have leaf miners, you can use a pesticide or spray neem oil on the leaves to deter these pests.

One of the great things about columbines if you live in the mountains is that they are deer-resistant. For my family in Colorado, deer are a common threat to the garden, so it’s a huge benefit to have a flower that won’t get eaten. 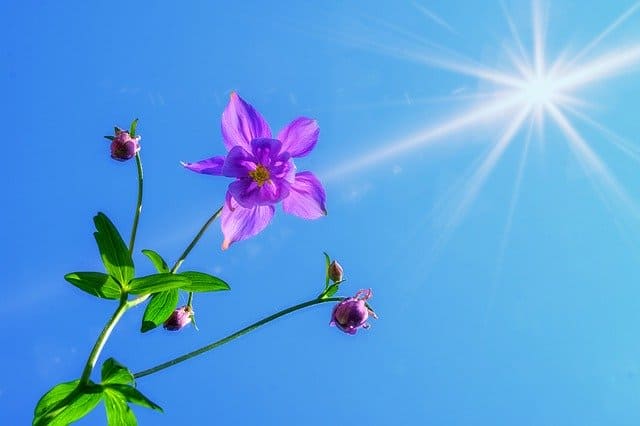 Another common problem for columbine flowers is too much heat. These are high altitude plants that will wither in intense heat.

Usually this is easy to solve; you just need to make sure that you plant your columbines in the shade. If you live in a hot climate, you’ll want your plants to be mostly shaded, while in cooler climates you can place them in partial sun. 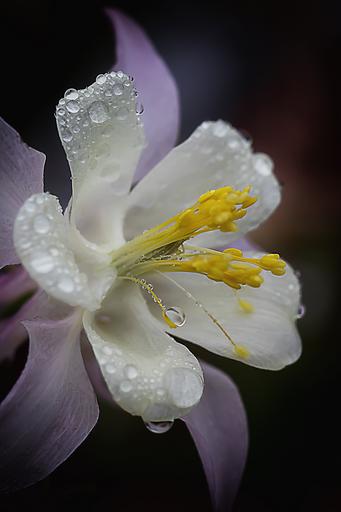 Native to high mountains, columbine plants can survive through cold winters to bloom again the next year.

Luckily, columbines are fairly resistant to cold. In fact, you can usually plant them before the last frost of the season. Come summer, they will still be able to grow.

Once the weather begins to cool down in the fall, the columbines will die for the season. However, they are generally able to withstand the winter frosts and snows and will reappear the next spring and summer.

That being sad, columbines do need some warmth and sun. If you live in an especially cold climate, make sure to give the columbines plenty of sun so they don’t frost over every night. 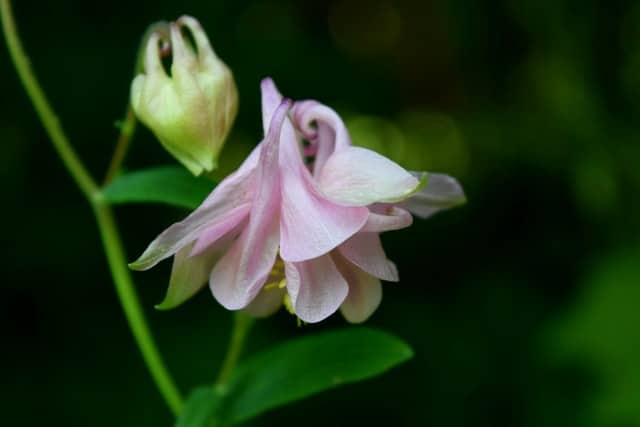 Too much water can kill your columbines. These plants are fairly hands-off!

It’s much more common for columbines to be overwatered than underwatered. An overwatered columbine will develop root rot and will begin to wilt.

You’ll notice especially that the leaves seem to droop and may start falling off, and the flowers won’t bloom as beautifully as they should.

To prevent overwatering, water only once the soil has begun to dry out, and make sure it is a well-draining soil that won’t retain too much moisture near the roots.

To Deadhead or Not? 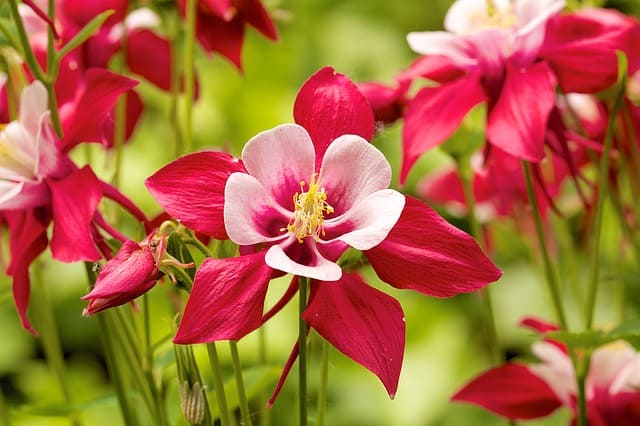 Columbines will spread and grow on their own if you choose not to deadhead.

Finally, you’ll need to decide whether or not to deadhead your columbines. These plants can grow well on their own, but a bit of pruning can lead to healthier and more focused growth.

Deadheading means cutting off the flowers once they have finished blooming. This can make the plant last for more years and it can help you maintain a carefully structured garden.

However, if you don’t deadhead, the flowers will self-seed and spread around the garden. Your plants may die a year sooner, but only after first planting seeds for future plants. If you want your garden to look like a field of wildflowers, I suggest foregoing deadheading. 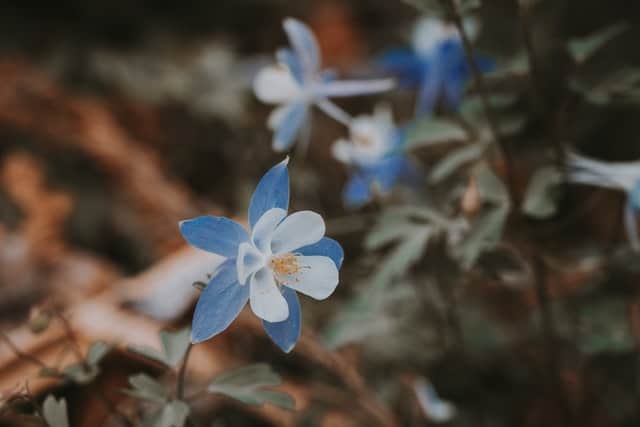 Of all the varieties and colors, which columbine will you choose to fill your garden?

Now that you know the main elements of columbine care, it’s time to start planting. Whether you choose to start from a seed or replant a potted columbine, these flowers are sure to bring in the spot of brightness and color your garden needs. 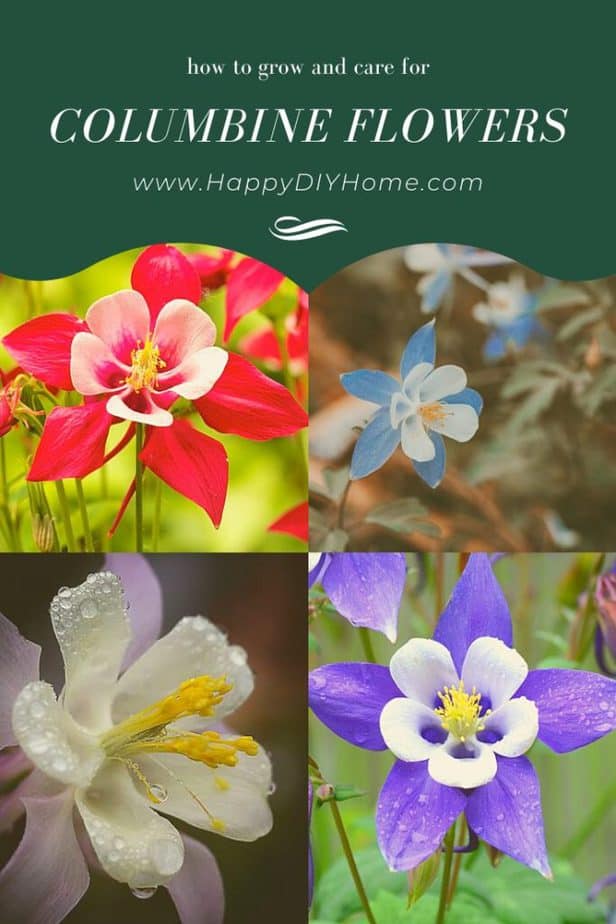