An old fashioned favorite, gardeners have been growing rhubarb for centuries. In recent decades this incredibly tart vegetable has undeservedly fallen out of favor. If you’ve never experienced the sour delight of rhubarb then you are in for a treat. When baked in a sweet pie or crumble or used as a jam (rhubarb is hardly ever eaten raw) it is a delight. These unusual looking plants are also surprisingly easy to grow.

The root and rhizome of the plant has also been used for medicinal treatments in Asia for at least 5000 years. Even today people continue to use rhubarb to treat digestive issues, heartburn and cold sores.

Interestingly, while botanically rhubarb is a vegetable it is used, for culinary purposes, like a fruit. In 1947 US Customs officials even declared it a fruit for tax and import reasons.

During the winter rhubarb, or pie plant as it is also known, needs extended exposure to temperatures below 40 ℉. In USDA Zones 3 to 8 these crops can be grown as long lasting hardy perennials. In warmer zones the plant is best grown as an annual.

Growing rhubarb is also an incredibly low maintenance task. Once the crop is established it requires little regular attention and, if it is happy, will produce edible stalks for many years to come. It is also one of the earliest foods to ripen for harvest each spring. A long lasting crop, in many climates pie plant can be harvested from spring until late summer.

A reliable crop and an unusual addition to any vegetable garden, if you want to learn how to add this tart treat to your vegetable garden this is our complete guide to growing rhubarb. 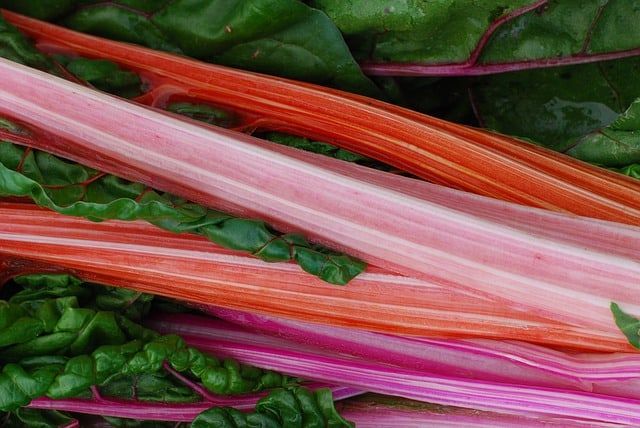 These attractive pink stalks may not be as popular as they once were, but they are still a great tasting and attractive addition to the edible garden.

Warning, while they may look attractive the foliage of the rhubarb plant contains oxalic acid. This means that the foliage is poisonous and should never be consumed. This applies to both humans and animals. When harvesting the stalks, immediately cut away the foliage and dispose of it.

Avoid using the stalks after the first frost of the year. Oxalic acid, which is usually only present in the foliage, can migrate to the stalks after a frost. Your rhubarb plant will be safe to harvest and consume the following spring.

While the foliage is safe to place on a compost heap you should not feed it to livestock.

Which Variety Should I Grow?

Growing rhubarb from seed is possible, but it is a slow, time consuming process. It is far easier and quicker to grow the plant from crowns. A crown is an established rhubarb plant that is at least one year old. Mature crowns produce a crop of stalks in the first harvest season after planting.

You can also grow divisions of old established crowns as new plants. These, also known as budded pieces, can be cropped two years after planting.

Garden stores and plant nurseries sell crowns. Online nurseries also sell dormant crowns. If you order online or by phone, your crown will be dispatched to when it is ready for planting. This is any time from early fall until early spring. 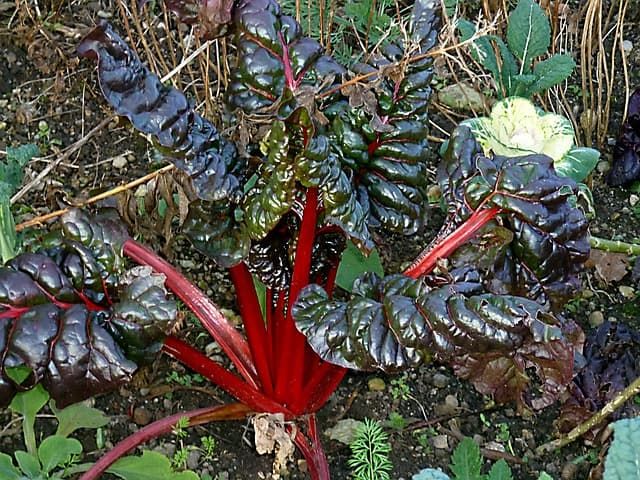 The attractive, unusual stems come in a range of pink and red shades. This adds early season interest to the otherwise bare spring garden.

Choose your growing position carefully. These are long lasting plants, and can remain in the ground for up to 10 years. Pie plant also has an extensive root system so plant it somewhere you are unlikely to dig and disturb the roots.

Growing rhubarb is best done in a rich soil that is kept slightly moist. As well as being fertile the soil should have a pH level of 5.5 to 6.5. If you are unsure of your soil profile, use a soil test kit. You may need to make amendments before you begin planting.

A full sun loving plant, in USDA zones 6 and higher, plant in a position that enjoys afternoon shade. This helps to prevent the foliage becoming sunburnt.

In the warmest gardens the plants will cope well in a partial shade position. In cooler climates, aim to plant somewhere where the stalks can enjoy at least 6 hours of sun every day.

Avoid growing in heavy or poor draining soils. This can cause the plant to develop root rot. If your garden is heavy and poorly draining, you can try growing rhubarb in a raised bed.

You should also avoid planting in areas that are susceptible to frost, these are also known as frost pockets. Frost can damage young stems.

Crowns are best planted in late fall or early winter. November or December is ideal.

Use a sturdy shovel to dig a deep, wide hole. The hole should be at least 18 inches deep and wide.

Partially fill the hole with an even mix of good garden or potting soil and compost or aged manure. You can also work in a cup of all-purpose organic fertilizer for an extra boost.

If the crown is in a container, carefully remove it. Place the roots of the plant in the hole and continue to fill with your soil mix. The buds on the top of the crown should sit no more than 2 inches below the soil level when fully planted. Planting deeper than this can slow the plants vigorous growing habit.

Firm the soil down, removing any air pockets. Water well and cover the surrounding soil with a compost mulch. Do not directly cover the crown. A growing tip should emerge within 4 weeks.

A mature plant can be up to 3 ft in diameter. If you are growing more than one, space the crowns at least 3 ft apart.

Growing rhubarb in pots is just as easy as growing in the ground. The pots should be as large as possible, at least 20 inches wide and deep. They should also have lots of drainage holes in the bottom.

Fill your chosen pots with a mix of good quality potting soil and well-rotted compost and plant as described above.

Once established this is a surprisingly low maintenance plant.

For the first few years keep the plants well watered. Applying a layer of mulch around the base helps to minimize water loss and keeps the soil consistently moist. Working a couple of shovelfuls of compost into the soil around the crowns each spring helps to maintain good, healthy growth.

At the end of the growing season apply a top dressing of well-rotted compost to the soil around the stems. Do not allow the compost to touch the stems or the top of the crown. This can cause the plant to rot.

Weeds can hamper growing stalks. Weed the soil around the rhubarb regularly. Mulching also helps to keep the soil weed free. Be careful not to cover the crown with mulch or compost. This can cause it to rot. 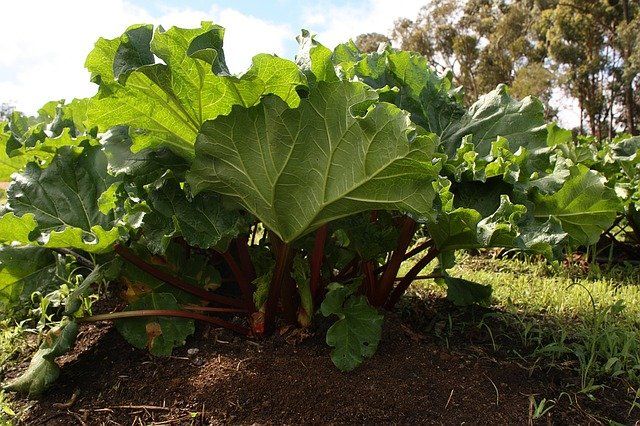 An easy to care for plant, try to keep the soil as weed free as possible.

Do not allow the soil to dry out. You may need to water more frequently during prolonged dry periods. A watering can often gives you more control than a hosepipe, This allows you to evenly soak the soil around the plant.

To boost growing plants, a general purpose fertilizer can be applied in March. Consult the packet for the exact amount, but in general you will need to apply about 4 oz per square yard. When applying the fertilizer try to cover as much of the soil above the root system as possible.

In February, when buds begin to appear, add a handful of general purpose fertilizer or an organic equivalent such as fish, blood and bone to the soil.

Rhubarb crowns can occasionally send up flower stalks. If allowed, these decorative stalks can reach a height of 6 ft. While they have some ornamental value the flowers can sap the plant of its energy. This impacts on the development of the stalks.

Remove the flowers as they begin to form. This encourages the plant to place more energy in growing edible stalks.

As the plant gets older you may need to divide it. You can replant the divisions for a larger crop or pass them along to fellow gardeners. Planting a division is an easy way to jump start a rhubarb patch.

Divisions are best made in early spring before the leaves begin to unfurl.

Use a sharp shovel or knife to cleanly slice through the crown of the plant. Aim to remove a healthy section with at least two pink knobs. This can then be planted on as described above.

In general you will need to divide the plants every 5 or 6 years.

As the top growth dies back in the fall use a garden scissors to remove the dying foliage and expose the crown to the frost. This breaks the dormancy and encourages a good crop of stalks to form the following year.

How to Force Stems

Forcing stems is useful if you want an early crop.

If you decide to force the plant, do not force that crown again for two years. Constantly forcing a crown can kill it. 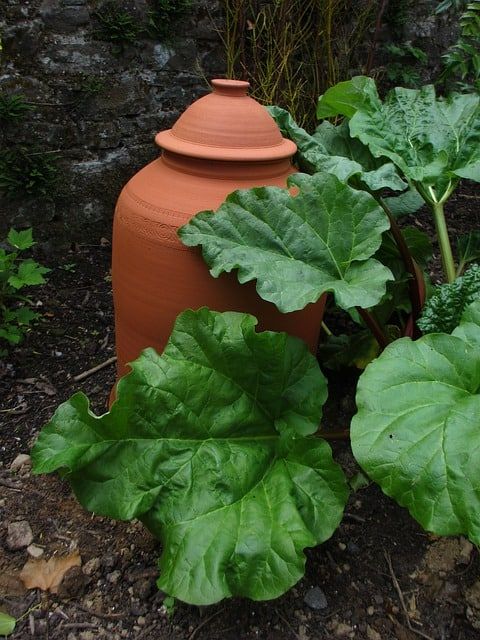 Blocking out the light forces stems to grow. This is useful if you want to enjoy an early harvest.

In a favorable position, and with the proper care, growing rhubarb is a low maintenance process.

Crown rot is the most common issue. This is usually caused by either soil or water-borne fungi and bacteria. Crown rot can cause rhubarb to look sickly. Growth may also slow or cease. Upon closer inspection the root will look rotten.

If left untreated the disease can spread to the foliage or the stems, leading to the death of the plant. If noticed early enough, affected areas can be cut back allowing only the healthy parts to remain.

Crown rot can be avoided by planting in well draining soil and adopting good growing practices.

You will also need to protect growing rhubarb from snails and slugs. Organic controls such as Copper Foil tape are particularly effective if you are growing in pots. Eggshell or sawdust barriers and beer traps are also just as effective as chemical controls.

Wait until the second year before harvesting. Harvesting before this point can reduce the vigour of the plant.

In the second year, harvest sparingly. Remove only a few stems.

In the third year, remove between a third and a half. Continue to harvest about half the plant each year. Always leave some stalks and foliage in place to encourage active growth.

While you can harvest rhubarb throughout the summer it is best not to over crop and exhaust the plant. Stop harvesting in June. If you do harvest later than this, remove as few stalks as possible.

To harvest simply hold the stalk firmly at the base, as close to the soil as possible. Carefully ease the stalk out of the ground, try not to snap it away. In general four to six stalks will provide plenty of rhubarb for the average family. 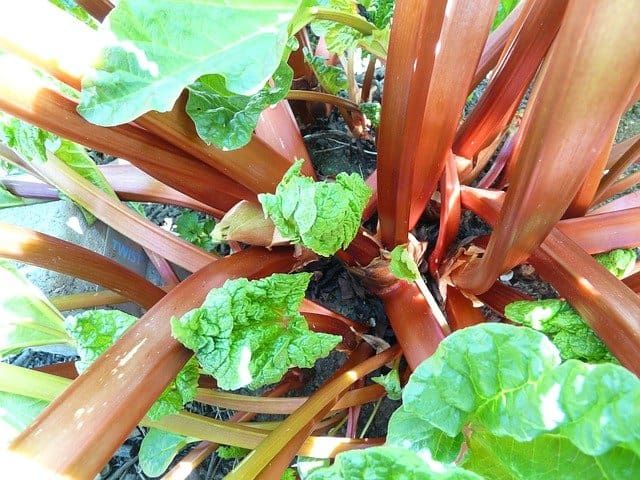 An attractive, easy to grow plant. This is a reliable, low maintenance addition to the edible garden.

Rich in vitamin c and fiber, growing rhubarb is not only easy it is also good for you. In the right conditions this is a trouble free, heavy yielding plant that is a great addition to the vegetable garden. It’s attractive long stalks also provide ornamental interest as well as making a great sweet tart. 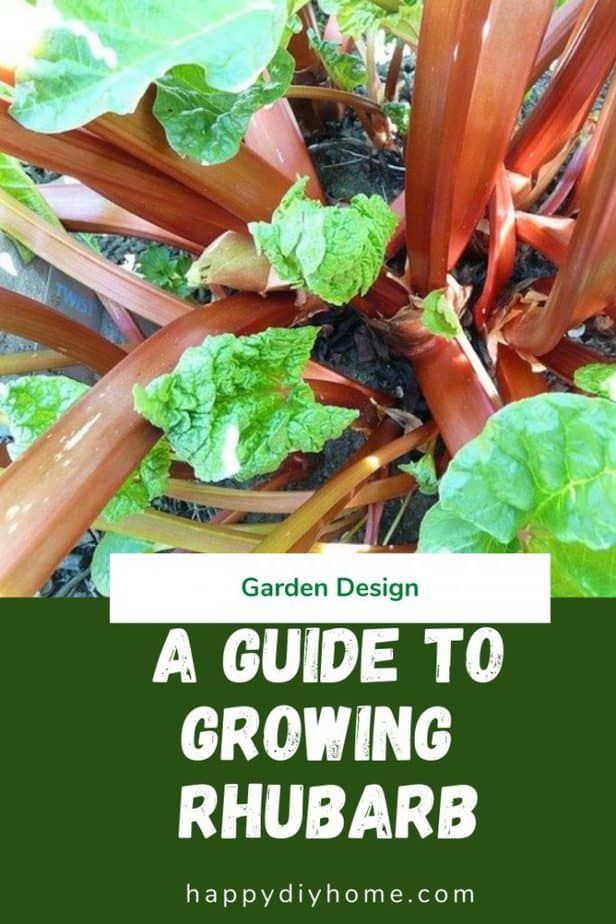 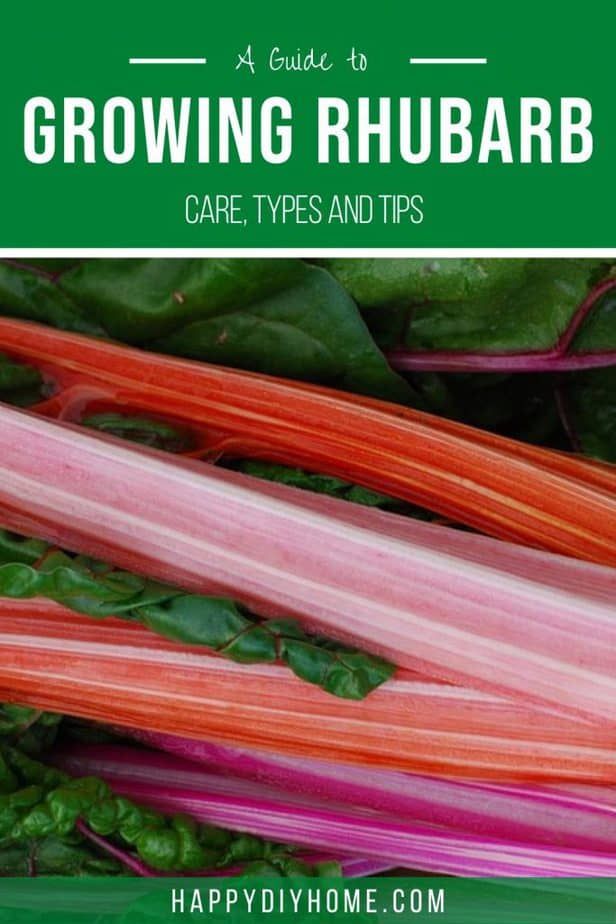