I have to admit that I love a great yard and plants but I am a LOW maintenance kind of gardener.  That is why I love my blackberry bush. I tend to it and do what is necessary, but it does not require a vast amount of effort to thrive.  Whether you are the type of gardener that likes to get out in the yard often or you are more like me and consider yourself low maintenance the blackberry bush is a plant for you.  Blackberry bushes produce beautiful blackberries that are packed full of vitamins, antioxidants, fiber, and taste delicious. 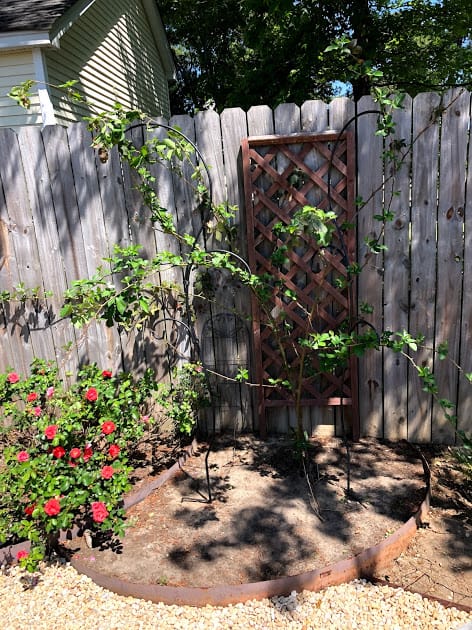 My blackberry bushes thriving and growing so tall and the vines growing so long!

Getting Ready to Plant

I always look at the USDA Plant Hardiness Zone Map to see if the plants I want to buy will grow in my location. The soil has to have good drainage. The soil is important but blackberry bush plants are adaptable and hearty.  You will just want to avoid soil that has a lot of clay.  If it does you can add peat moss to loosen the clay for better drainage. 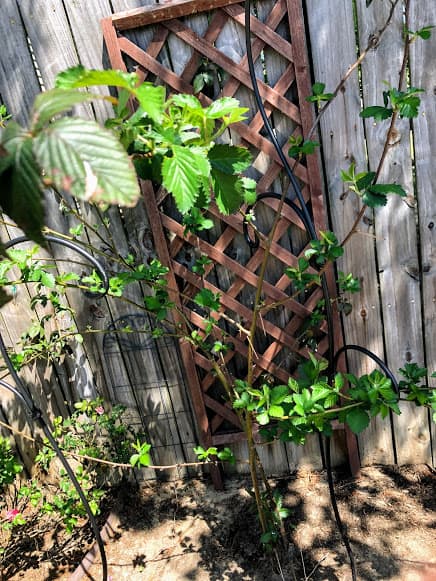 Near a fence is always a good spot to plant your blackberry bush.

A blackberry bush must have full sun.  I chose the spot close to my fence on the advice of my master gardener friend.  She says that the vines love to crawl up the fence.  Blackberry bushes spread out so you are going to need some space for them to thrive.  I have a trailing thornless blackberry bush.  There are different varieties of blackberries.  They can be trailing, semi-trailing and erect.  I prefer the thornless variety because they are so much easier to prune.  The vines can spread 10-20 feet across.  My plant spread about 6 feet the first year and about 10 feet the next year and now they have spread about 20 feet.  They keep on looking for places to go.

The long vines will work their way past anything.  The vines grow in any direction but can be led in the direction that you would like them to go.  The problem with the vines is they did not just lay on the fence.

I chose a wood trellis on my first attempt.  It works well when the plant is young but as my plant developed I knew I was going to have to put a bit more thought into how I was going to maintain my ever-growing vines.   The more vines you have the more berries you will get. 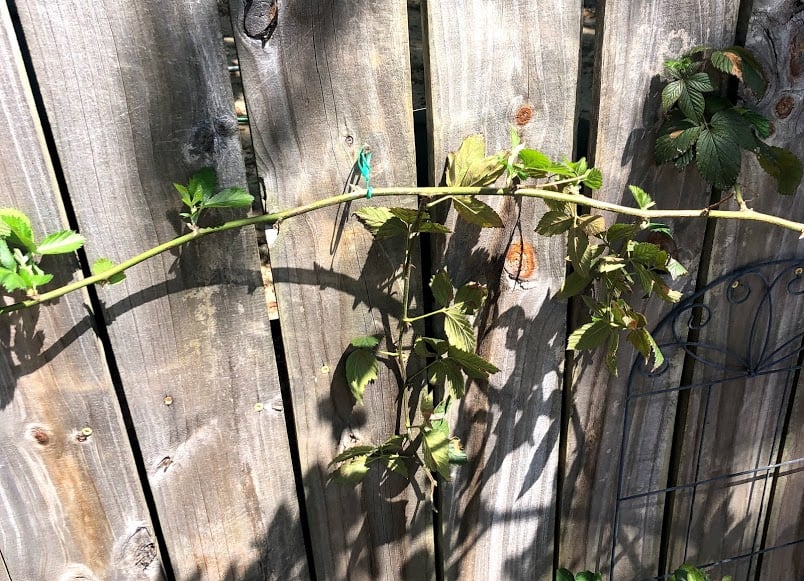 Blackberry bush vines growing along the fence with some help from nails and plant twist ties.

Shepard’s hooks to allow blackberry bush vines to grow up rather than just out on the fence.

I have two Shepard’s hooks help keep help the blackberries up and off the ground. If you want your blackberry bush to be more contained to one spot I recommend a vertical trellis or an archway trellis.  Depending on your space you can use any type of trellis or fencing as long as the vines can attach to it.

You do not have to water a blackberry bush very often.  They are usually just fine with the amount of rain that falls in your area.  I live in the humid south so in the summer it can get very hot.  If it has not rained in quite some time I will water.  When I water I try to do it in the early evening to avoid evaporation.  I also water when I first plant the blackberry bush and when the fruit is about to come in.   I make sure that I water because it makes the blackberries juicer and tastier. 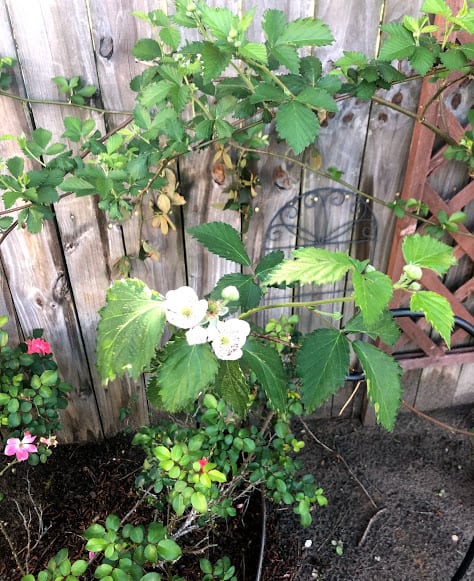 Picture of a flowering blackberry bush that will turn into blackberries.

I got excited and started to harvest my blackberries too soon they were the correct color very dark almost black but were still hard to the touch.  So I gave them a few more days and they were ripe and tasted delicious.

You want to prune your blackberry bush in the dormant season after all the fruit is gone.  Pruning is very important for a few reasons.  It will ensure that your plant will maintain it’s shape and size.  If you prune then you can guide the plant so that the next year they will attach to the trellis, shepherd’s hook or fence in the way you would like.  Pruning will also stimulate the growth of the plant and will help have better blackberries next season.  Old stems can be pruned very low.  My older stems turn a white-greyish color and I know that it is okay to prune these vines way back.  Removing the stems after they have produced fruit is also good for the overall health of the blackberry bush so the old stems do not drain the plant and make sure next year’s shoots are healthy and strong.

If you missed some of the stems when you prune in the fall make sure that you remove them in the spring.  It is always a good time to get rid of the stems that will never produce fruit. 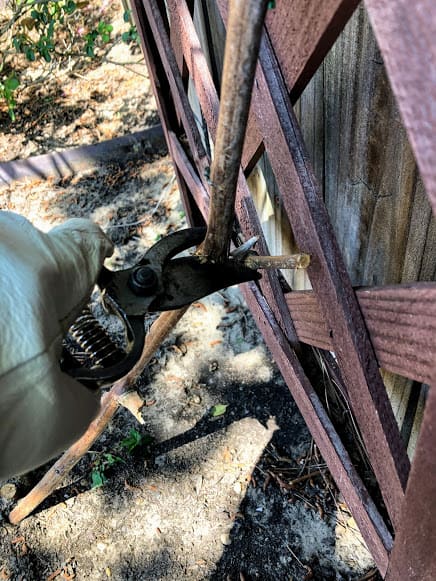 Pruning the shoots that will not produce blackberries next year. 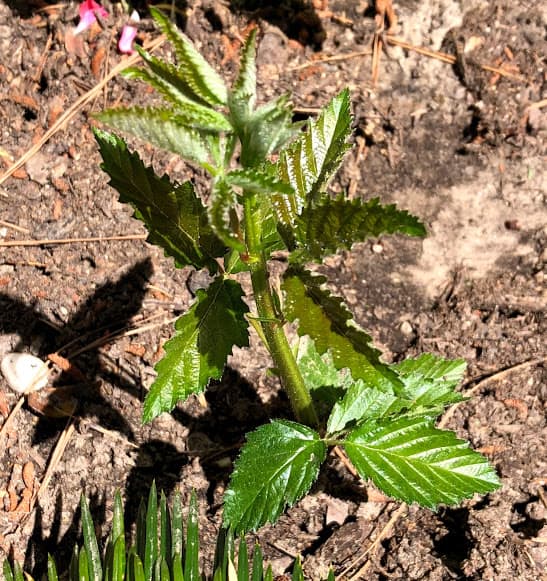 New shoots that will not produce fruit this year but will next year.

A blackberry bush grows on a three-year cycle.  The first year the shoots come out and but do not produce any fruit.  The second year those same shoots produce flowers and the flowers turn in it to fruit.  After they produce fruit they turn a greyish color and will not produce flowers or fruit.  Those are to be pruned.  The cycle continues so there are always new shoots coming in and old shoots dying off.  In this way, the blackberry bush is both biennial and perennial.