Hollyhocks are a staple of the cottage garden and mixed flower bed planting schemes. Usually a biennial plant hollyhocks produce flowers on tall spikes at the height of mid summer, from June until August. While many varieties are biennial, flowering in their second year, some cultivars are similar to perennials. This means that they flower in their first year if planted early enough.

Apart from regular pruning and staking hollyhocks, for all their ornamental value, are pleasingly easy to care for. 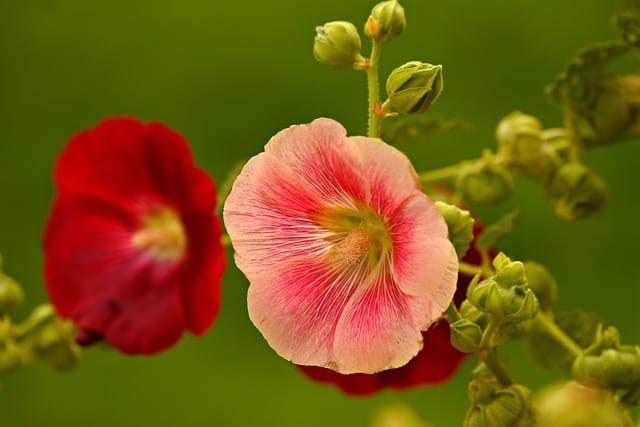 Stately and elegant, hollyhocks are a great way to add color and structure to your garden. They are also pleasingly easy to care for.

Warning while hollyhocks aren’t toxic the stem and foliage can irritate the skin. Wear gloves and a long sleeved top when planting or pruning your hollyhocks.

Hollyhocks are hardy in USDA zones 3 to 8.

Coming in shades of blue, purple, pink, red, yellow, white and black, hollyhocks can be single, double or cup shaped flowers. While many flower on long stalks, others produce only short stalks or no stalks at all.

Most varieties reach 6 to 8 ft in height and have a spread of up to 2 ft.

Alcea Rosea is the most common variety of hollyhock. Growing in USDA zones 4 to 10 it reaches up to 8 ft in height. A self-seeding variety alcea rosea comes in a range of colors, attracting hummingbirds and butterflies to the garden. 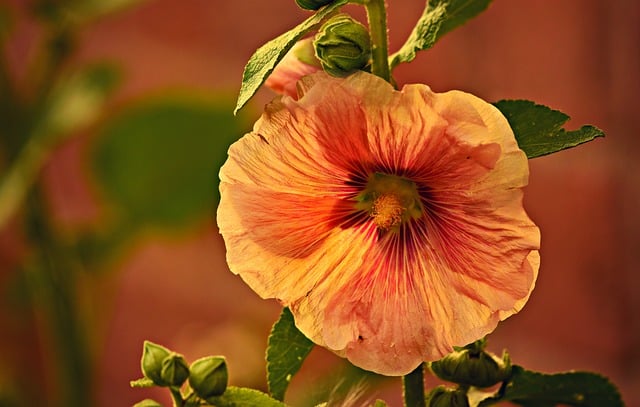 Hollyhocks come in a range of heights and colors. While some varieties have a relatively short flowering season, others can flower throughout the summer.

Alcea Ficifolia, or the fig leafed hollyhock, is not as widely known as Alcea Rosea but is just as attractive. Producing large white and cream flowers in abundance throughout the summer, these are pleasingly robust plants. One of the most popular Alcea Ficifolia cultivars is Happy Lights.

The deep purple or black flowers of Alcea Nigra sit in stark contrast to other, brightly colored varieties. This cultivar is a great way to add contrast, or just something unusual to your garden. Alcea Nigra cultivars include the attractive Arabian Nights plant which produces deep purple flowers.

Alcea Rugosa is known for its soft yellow flowers. Easy to grow in full sun positions, this variety originates in Russia. When planted in larger beds, clusters of Alcea Rugosa are particularly pleasing to the eye.

Where to Plant Hollyhocks

Hollyhocks are a great way to not only add height to a border but can be planted with other tall plants to create a natural screen bringing privacy to an area.

Hollyhocks do best in full sun positions. They also grow in partial shade. However growth may be slower and flowering not as abundant.

Your chosen position should not be windy, or it should have some shelter from strong winds. A tall, stately plant, hollyhocks are prone to wind damage.

Plant in rich, well draining soil. You can improve poor soil by working in well-rotted manure or aged compost before planting. 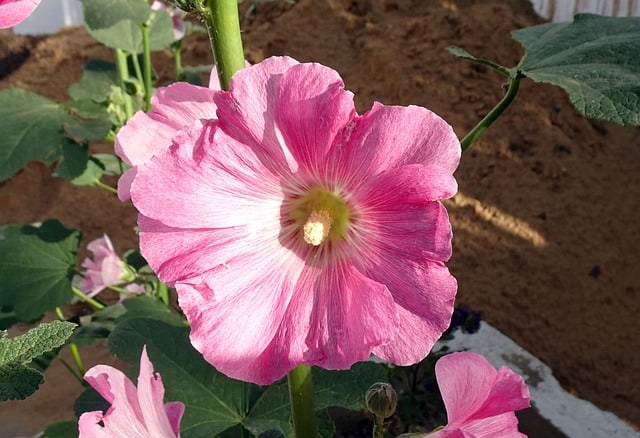 These are bright, sun loving plants. If you get the positioning of your hollyhocks right, they will be pleasingly easy to care for.

Hollyhocks can be purchased as young plants and planted straight into the garden. They can also be started from seed. This is often cheaper and allows you access to a wider variety of plants. The downside of growing from seed is that it takes longer and requires more effort on your part.

Sow seeds directly outdoors into a well worked bed about a week before the last frost date. Sow thinly, about 2ft apart, to a depth of around a quarter of an inch. The soil should be moist when you sow.

Don’t allow the soil to dry out until the plants are established. Regularly weed the beds. Fast growing weeds can smother young plants. There are a number of useful tools to help you keep your garden weed free.

You can also start the seeds indoors. This is particularly useful in cooler climates where the last frost date is relatively late in the year.  Begin sowing seeds indoors around 9 weeks before the last predicted frost date.

Fill tall containers with fresh potting soil. Hollyhocks are known for their production of long taproots. Sowing in tall pots allows the root to develop without becoming stunted or deformed.

Sow one seed per container. Water well and allow to germinate. Germination usually occurs within 14 days. In cooler conditions germination may take longer.

Begin hardening off in preparation for planting 2 to 3 weeks before the last frost date.

Before planting, dig the soil over and work in compost. Working in compost helps to enrich the soil. It also helps to improve drainage.

Position the plant in the center of the hole. The top of the tap root should sit just below the soil level. Carefully fill in the hole, being careful not to compact the soil. Water well.

Your chosen pot should be clean and have drainage holes in the bottom.

Fill the container will light, well draining potting soil. A mixture that is equal parts garden loam, peat moss and perlite is ideal. This combination drains well while retaining some moisture. It is also light enough to allow air to circulate around the roots.

Place some pebbles or crock in the bottom to improve drainage. Fill the container with your chosen potting medium and plant as you would in the ground.

Once germinated hollyhocks are pleasingly easy to grow. If you are cultivating taller varieties remember to provide a bamboo stake, trellis or some other form of support.

Supports are best installed when you plant. This allows you to get young plants off to a good start, encouraging an orderly growth habit from the start. 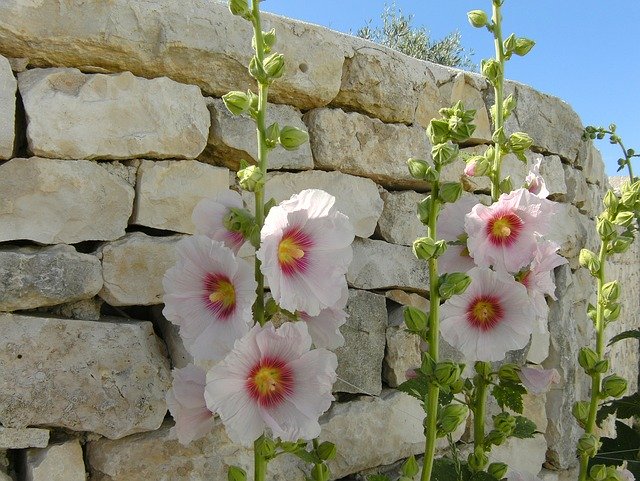 Plant away from windy positions. Taller plants are prone to bending and snapping. Planting in front of a fence or wall not only helps to protect plants from the wind. It also provides some natural support for the plants as they grow.

Established plants are pleasingly drought tolerant and can go for longer periods between waterings. If you find a watering can, when full, too heavy to carry expandable hoses are a great way to water large areas with ease. As well as being easy to use they are also pleasingly durable.

When watering, try to water only the base of the plant and the surrounding soil. Keep the foliage as dry as possible. Wet leaves can create a humid environment. This, in turn, can become a breeding ground for disease.

Should I Apply a Fertilizer?

If planted in rich soil there is no need to fertilize.

Growing plants will benefit from a light application of general purpose fertilizer. This is best applied in the spring, just as new growth begins to emerge.

Alternatively, once a year, work compost into the beds around the plants. Like applying a fertilizer, this is best done in the spring just as new growth emerges.

Many varieties of hollyhocks freely self seed. To prevent this, use a garden scissors to cut away the flowers and stalks as they fade.

If you want the plants to self seed allow a few spent blooms to go to seed.

Cut back spent flowers and foliage in the late fall, after the seeds have dropped. Pruning in the fall helps to prevent overwintering rust diseases from striking.

How to Over Winter Hollyhocks

In colder areas hollyhocks are commonly grown as an annual. Allow spent flowers to go to seed and harvest. Sow the seeds, as described above, in late winter. Following germination the young plants can be planted out in early spring.

In warmer climates hollyhocks can be overwintered.

To overwinter, prune away spent growth. Aim to cut the plants down to about 6 inches above the ground. Cover with a layer of straw or mulch, about 5 inches thick. Alternatively a horticultural fleece, such as the Gardaner Plant Cover, can be used. This will protect the plant from harsh frosts while still allowing moisture to penetrate the soil.

In the spring, as temperatures warm, gradually remove the mulch. Slowly exposing the plant and root system to cooler temperatures gives them time to acclimatize. It also helps to prevent shock. If a spring freeze threatens, reapply the mulch.

Regularly check the plant for signs of new growth. When the green shoots begin to emerge, completely remove the mulch.

The easiest way to propagate hollyhocks is from seed. A self-seeding plant, hollyhocks happily reproduce, and spread, if spent flowers are allowed to go to seed.

If you want to control the spread of the plants deadhead some of the spent flowers. Allow the remaining spent flowers to go to seed. This means that the flowers shrivel up and turn brown. As the petals fall from the plant, fuzzy seed pods emerge.

As the seed pods dry they turn a lighter shade of brown. At this point they are ready to be harvested.

When the seed pods are fully formed and ripe cut them away from the plant. 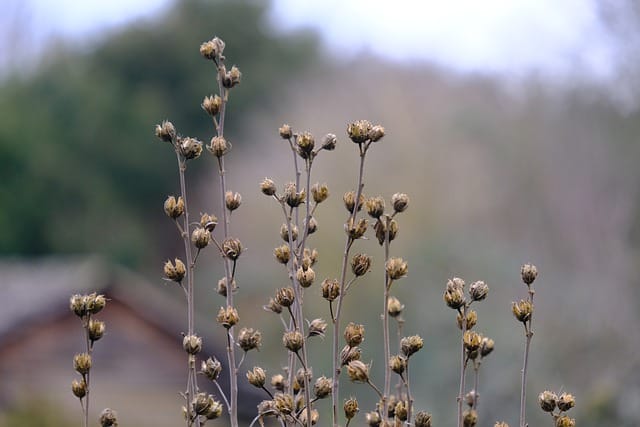 The easiest way to propagate hollyhocks is to allow spent flowers to go to seed.

Place the pods in a paper bag and allow them time to dry.

When the pods are dry, crack them open and pick out the seeds. Hollyhock seeds are easy to distinguish from the pods. They are usually flat and are quite large. They also tend to stick together. Use your fingers, or tweezers, to separate the pods and remove any chaff.

At this stage the seeds still contain some moisture. Dry them out by placing them on a paper towel and air drying for a week. Don’t leave the seeds exposed for too long. After a while the seeds will begin to absorb moisture from the air.

When fully dry store the seeds in an envelope in a sealed jar. Remember to label the jar. Hollyhock seeds remain viable for 9 years.

Hollyhocks are prone to rust. This is a fungal infection which first presents itself in the form of yellow spots on the foliage of the plant. This develops into brown bumps appearing on the underside of the leaf.

Affected leaves should be cut from the plant and destroyed. Fungicides such as the Spectracide Fungicide spray which contain sulfur or copper can also be used to treat rust.

Some varieties such as Alcea Rugosa are rust resistant. Adopting good growing practices helps to keep plants problem free, it is also far easier than trying to cure the problem. To prevent rust water the plants from below and ensure they are correctly spaced so that the air can circulate freely. Pruning every fall also helps to keep plants healthy.

Spider mites, another common pest, can be difficult to remove. Leaving a matt of webbing over plants, large infestations are best pruned away. Smaller infestations can be treated by washing away the pests or by wiping the foliage with neem oil. 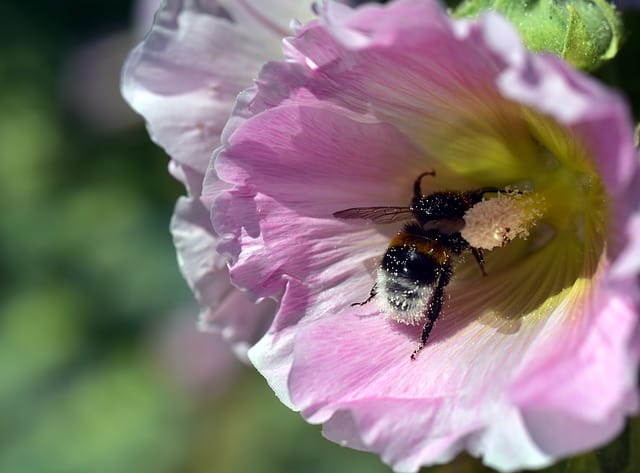 With a little care, hollyhocks can add color and structure to a floral summer garden. Despite their elegant appearance these are pleasingly robust plants that are also popular with pollinators.

Capable of reaching up to 10 ft in height hollyhocks are a stately addition to the back of a flower bed. The blooms look particularly attractive when planted alongside other ornamental plants such as dianthus, phlox, roses, clematis, dahlia and larkspur. In addition to adding drama and color to the garden hollyhocks also attract hummingbirds and butterflies to the garden. 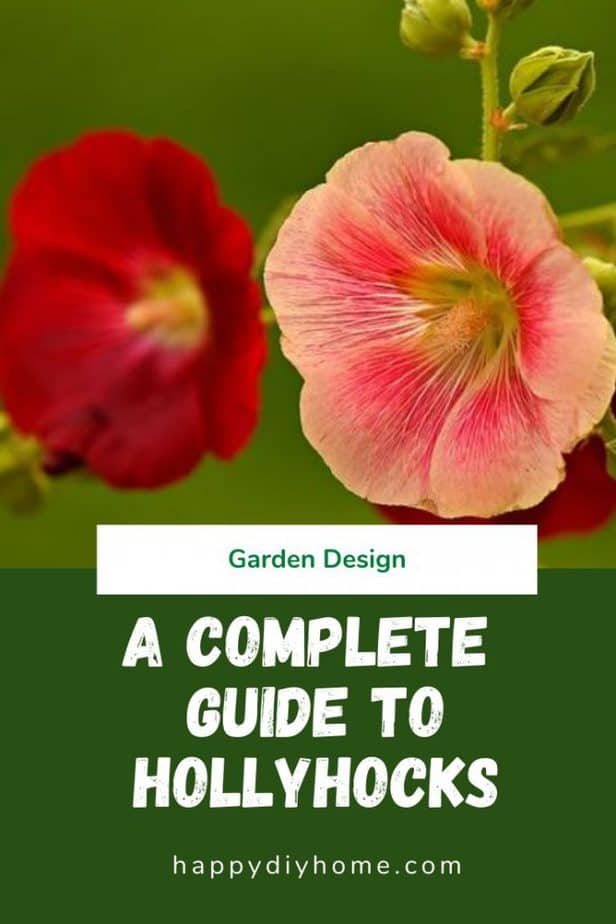 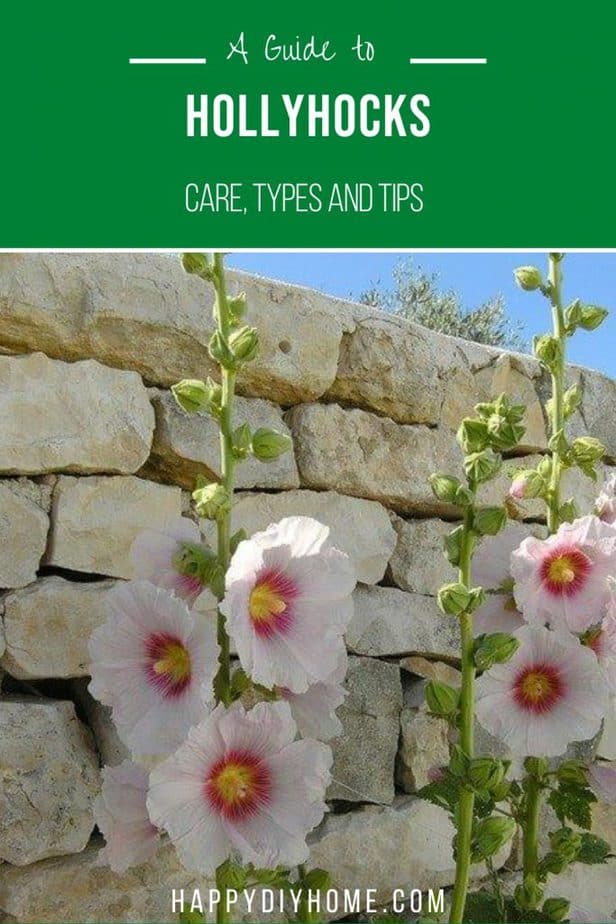